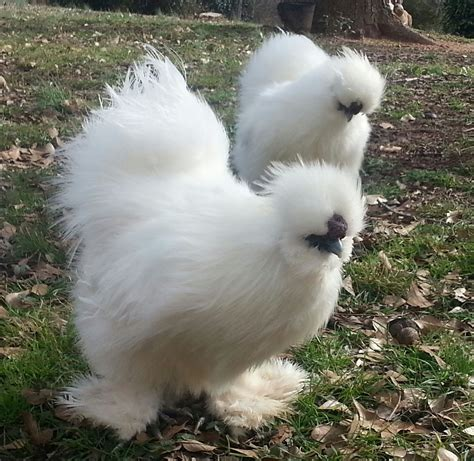 Many backyard poultry enthusiasts have the desire to hatch baby poultry (i.e Chicks, ducklings, poults, keets, etc.) at home weather for themselves or for others. And it truly is a wonderful, heart warming process. Many people use Incubators to hatch baby poultry. But it it more natural, healthier and cuter (

) if you let a broody hen hatch her own young. And that is what this short article is going to be about: 15 Breeds of Poultry that go broody are are good mothers.

What exactly is "Broody" though?? It is a hormonal change that makes the hen (whether a chicken, duck, turkey, peahen, or other) want to brood and hatch young. But the eggs must be fertile, so no male, no fertile eggs, then you would need to purchase fertilized eggs to place under the broody hen to hatch.

NOTE: Please understand these breeds listed are only the most commonly broody breeds. Though ALL breeds of poultry are able to go broody, some breeds it is more rare for them to go broody then others.

Silkie-
Silkies are a friendly breed who are very easy to train to eat out of your hand. Silkie hens are one of the most famous brooders, making them a great choice as foster mothers. Very broody.
Silkies are known to have originated in Asia and is mostly documented in China. There is evidence that they appeared in Java, Japan, and India. Their unprecedented appearance allows them to be easily remembered. They have a remarkable sweet personality. Silkies are great to get along with family and pets, thus making them a great backyard chicken.

Cochin-
Their large size, full plumage and heat-producing appetites equips them for the cold weather. Cochins only lay an average of two, medium brown eggs per week or 120 per annum. Overall, the breed produces poorly in every category. They lay few eggs, mature slowly as a meat fowl, and succumb to metabolism, heart, liver, and fertility disease. However, what they lack in production, they make up in personality. Cochin gained immense popularity when presented to Queen Victoria in the mid 19th century. The Shanhai chicken later called the Cochin came from China. The Cochins inspired a phenomena called “hen fever” on both sides of the Atlantic and lead many to the keeping of chickens as ornamental show birds and pets. Early on Cochin existed only in the buff colors. In the US breeders developed a bantam version of the Cochin and several different color plumages in the standard size. The American Poultry Association accepted the Buff, Partridge,White, and Black varieties in 1874 followed by the Silver and Gold Laced varieties in 1965 and the Barred Cochin in 1982.

Orpington (Buffs are the best broody verities)-
Orpingtons are friendly and relaxed, so much so that they can be training to feed from the hand. They are perfectly content in confinement, which goes along with why they make such good show chickens. They’re very active and like to roam around exploring, yet they aren’t too concerned when there isn’t too much space to do so. They tend to like each other and don’t get into arguments or squabbles either. Named after the village of its creation- Orpington, England- the Orpington was breed by Willaim Cook during the late nineteenth century using a mix of other breeds, such as the Croad Langshans, Minorcas, Langshans, and Plymouth Rocks. The Orpington took the most from the Langshan breed with the goal of crafting a breed that could be a laying machine, a goal that was accomplished. They were so good at laying, in fact, that documents from the time claim they could lay up to 340 eggs a year, though that number is highly suspect.

Wyandotte-
Wyandottes are excellent egg layers, a quality easily seen from the hen’s body shape. Trusting and rather friendly, Wyandottes make for easy chickens to care for, especially for those that just want a few tame chickens to have around the farm. The breed looks much heavier than it actually is due to the bulkiness their feathers suggest .The Wyandotte’s exact origin is hard to pin down, but we know that the first accounts of the Wyandotte breed comes from around the 1860s. First known as ‘American Sebrights’ and ‘Excelsiors,’ the Wyandotte can most likely be traced back to the Cochins as a likely breed to be bred from. The name ‘Wynadotte’ comes from the name of a ship, specifically the ship of an early breeder’s father.

Mallards-
This breed of duck goes broody and are great mothers.
The magnificent Mallard is one of the most recognizable bird species around the world. When flying, the bird displays a purplish-blue speculum, which is outlined in white. Males of this species are particularly colorful. Breeding males have a yellow beak, dark brown chest, black and white tail as well as bright green head and neck. They exhibit a white ring at the base of their neck. In addition, the sides of breeding males and most of their wings are gray. On the other hand, plumage of female mallards and non-breeding males is less vivid and colorful. The overall plumage of female mallards is spotted with tan and brown patches, the head is a lighter tan, showing dark bands near the crown and eyes. Females have orange colored beak, covered with dark spots. Females and non-breeding males generally look alike, though the latters have yellowish beak.

Muscovies-
This breed of duck are simply wonderful broodies and mothers.
absolutely none can compare with the uniqueness, the adaptability, the pure pleasure, and the usefulness of the Muscovy duck. Because many people think that this is a “strange” poultry specimen, I would like to set the record straight. Native to South America, their original name was “Musco duck” because they ate so many mosquitos. The Russian Muscovites were one of the first to import them to their country. Being very hardy, Muscovies are still roaming wild in the South American jungles today. Even here in North America, several states, such as Florida and Georgia, have wild Muscovies. These “wild” Muscovies are responsible for eating literally millions of pests every year. Were it not for them, these states would undoubtedly have more millions of “pests” that like to dine on people.

Runners-
This breed of duck can go broody and are good mothers.
This breed originates from Malaysia, a great garden helper, and a duck breed filled with personality. Their unique posture differentiates them from other duck breeds due to their ability to stand tall. Runner ducks are capable of laying close to 300 eggs per year.

Welsh Harlequins-
This breed of duck can go broody and are good mothers.
This majestic and docile breed originates from Wales and has a similar feather pattern as the Silver Appleyards. Of all the breeds we have raised, I find that Welsh Harlequin ducks will consume 80% of their diet through their ability to free-range. They will lay between 240 to 330 eggs per year

Narragansetts-
Narragansetts are among the easiest turkeys to raise, as they convert feed efficiently and possess outstanding foraging abilities. While this breed was the backbone of the earliest New England turkey production, by the early 20th century numbers had declined as turkey farmers bred larger birds with bigger breasts, to meet market demand. Narragansett hens tend to broodiness, as well as producing above-average numbers of eggs. The feather pattern of these birds includes white, black, gray and light brown.

Bourbon Reds-
Bourbon Reds, reddish-brown turkeys with white tail feathers, are among the larger heritage breeds. Bourbon Red hens tend to go broody earlier than other breeds, with good sitting tendencies and strong mothering instincts. Originally developed in Kentucky in the late 19th century, the breed is undergoing a 21st-century renaissance. Their foraging abilities, docile temperaments and carcass taste make them a favorite of the poultry enthusiast.

Royal Palms-
Anyone who thinks "beautiful" and "turkey" shouldn't appear in the same sentence has never seen a Royal Palm. These relatively small birds sport white plumage with black feather edging. Since they are primarily an exhibition bird, the breast has not been overly developed, as in commercial varieties. Besides adding beauty to the barnyard, Royal Palm hens go broody often and have good maternal instincts. This breed excels at foraging and is also good for bug control.

Midget Whites-
The rare breed known as the midget white is indeed small. It looks like a miniature version of the commercial broad-breasted white turkey, but without the extreme breast development, according to the American Livestock Breeds Conservancy. Developed in the early 1960s as a cross between commercial turkeys and the Royal Palm, the breed never caught on as a small table bird. Midget white hens are quite fertile and prolific, easily going broody. Their calm nature makes them a good choice for the backyard flock.


Thank you for reading! Drop a review and/or a comment and let me know what you think!
Reactions: N F C

I think there is merit to the article with a listing of qualities and origination of each bird. But, I'm not sure all of the info is correct. Generally runner ducks are not known for being broody. Can they go broody - sure. But, it's not a breed at the top of the list for broody ducks. They are great egg layers though. A little more research and some citing of sources would make this a great article.
Very nice!
Reactions: MapleValleyAcresPoultry