Almost Why Did The Chicken Cross The Road Chicken Coop Coop 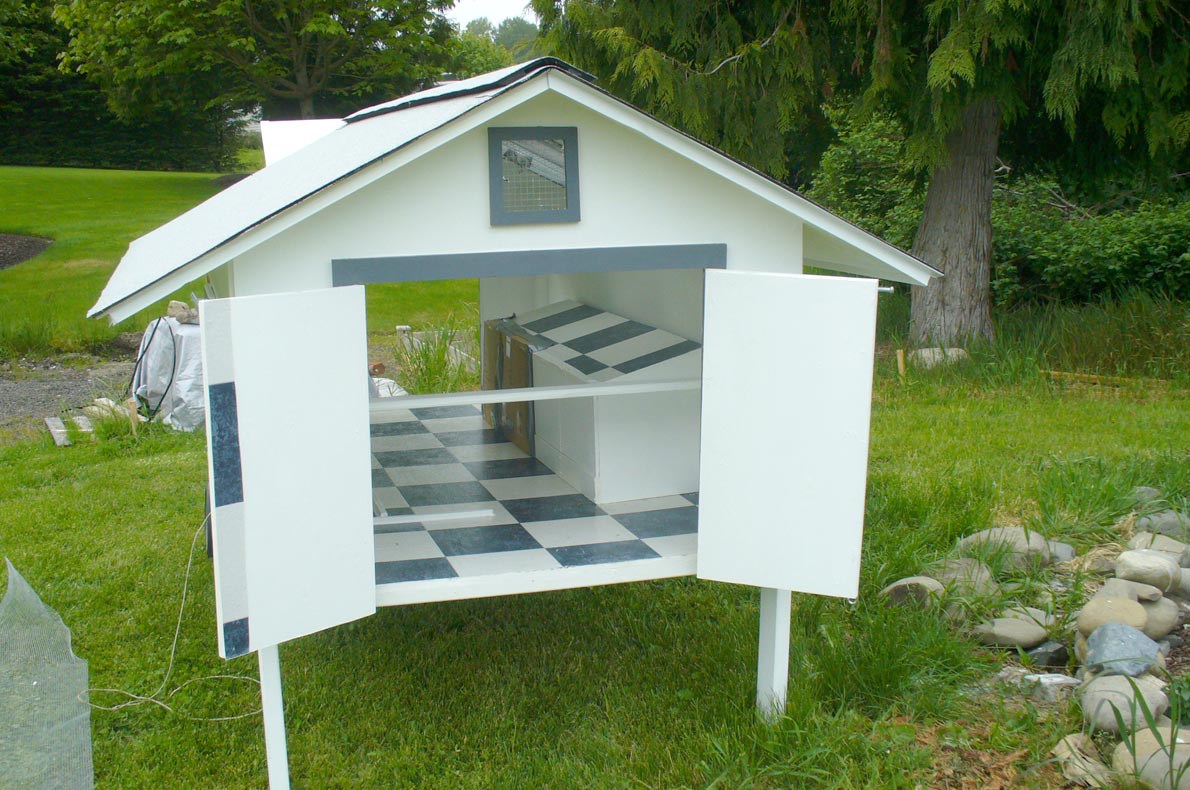 Describe 'Almost "Why Did the Chicken Cross the Road Chicken Coop?" Coop' here

When my sisters both bought chickens this spring I remembered that this was the year I had promised myself I would finally have my own flock. Yes, I did run out and buy the chicks before I had a coop. I did have a brooder ready for them and figured there was no way it would take 4+ weeks to build a simple coop. (Go ahead and laugh. I'll wait.)

After much discussion with DH it was decided we would build a coop. (I was all in favor of buying a custom-built coop from a chicken guy in the area. Expensive but we would both have avoided PCCSD. That's "Post Chicken Coop Stress Disorder.")

We decided on the "Why Did the Chicken Cross the Road Coop" from the Tractor Supply web site. With a peaked roof and doors on every side of the coop we decided that it would be large enough for our 5 birds once chicken math was taken into account. The description says it will hold up to 16 chickens but with 28 square feet of floor space in the coop (including nesting box space) it would be mighty cramped with 16 birds in there. I thought I would be adding a few birds a year but now I think this coop will be an annex to the larger coop I'm designing in my head.

We made a few design modifications along the way, such as adding a ridge vent, a recycled bathroom window on one side of the roof, and using just one 2 x 4 in each corner to save weight. I also added a screen under the left-side front door. This allows the chickens and I to eyeball each other. They seem to enjoy sitting in there and surveying their domain. Things I would do differently:

Use bigger wheels and lighter materials. This is one heavy coop. The 3/4" plywood roof adds a lot of weight and I don't know if it is necessary. We did need to add 2x4 bracing under the middle of the floor since both DH and I needed to crawl into the coop to work on the inside. Due to the weight we are going to make the coop stationary and attach a permanent run to it with many pop doors that will attach to a chicken tractor we can move around the lawn.

I might move the nesting boxes outside of the coop. There are four boxes and I don't need that many for five chickens but I'm using two boxes to store treats, gloves, first aid items, etc. That worked out in my favor but moving the boxes outside would add 4 square feet of space and that's enough for another chicken! Now that I know this will be a permanent coop I would have added a storage area for feed, grit, etc.

The legs are a little short for me (I'm 5'2") so I would make them taller so I don't have to hunch over to clean the middle of the coop. It's turning out to be easier for me to put newspaper down, crawl into the coop and commune with the ladies while I clean.

I added a large window so the ladies and I can see each other when I pass by. This design didn't include that and I missed being able to see what they were up to as I passed by. It also added a lot of ventilation.


Things I would do again:

Adding the ridge vent. Inexpensive way to add ventilation. The coop stays comfortable in the sun or when the arctic winds come through.One piece vinyl flooring. This is so worth the money. Clean-up is faster and easier.

Doors on every side of the coop. It's just easier. If you are building your first coop you'll learn a lot about building, cleaning, and how you work best with your chooks. Adding all those doors will make this first coop work better for you.

The many doors also make it easy to turn them into extra ventilation when you find out you need it.
Reactions: ~Cuba~

Nice details on the modifications you made. More pictures would be a bonus. Is this still being used?
Some nice modifications made to a TSC coop plan.
Read more…

Looks like you're on top of things but it's never a good idea to put end grain on the floor. Moisture will wick up into those legs and rot them out. A simple piece of ply sealed on the bottom will cure it.
Nice coop.
Way cool! Love the flooring!
toxo,
Thanks for the tip. This is temporary as we move the coop around the yard while we decide where its permanent location will be. At that point we'll raise the coop up onto a pressure treated 4" x4" frame. Tall enough to be comfortable for me to clean and we won't have to worry about rot.
Thanks for the advice on the extra doors. I'm in the process of building a coop right now and initially was just going to have one door to open wide for cleaning. At 6' long though, I was thinking it might be a bit too long to reach over to the other end of the coop for cleaning, even with a shovel or rake. Better to go with a door on either end. Nice coop!
Nice tractor (but can see why you want to make it stationary...it looks heavy).