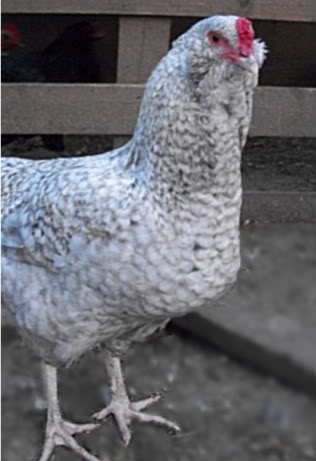 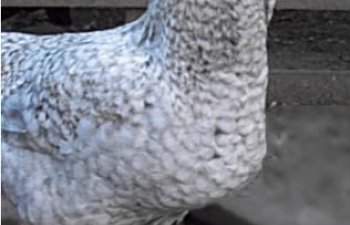 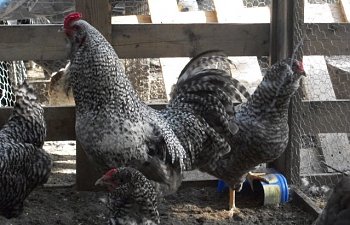 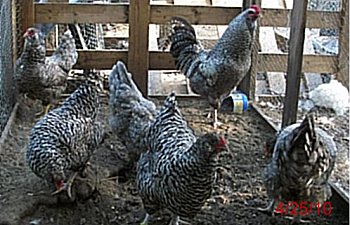 I'm not supposed to be able get slate legs on a barred bird. This may be as close as it gets. 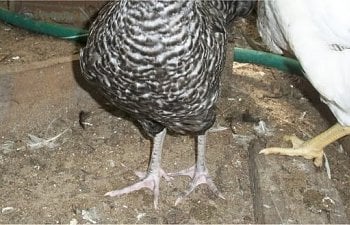 Barring Gene: B This is a Sex-link gene that stops and starts pigment production as in feather growth to give the well-known barring pattern as seen on Barred Wyandottes and Scots Greys. The extremely narrow and sharp barring seen on the Barred Plymouth Rocks is achieved by the presence of the gene ('K') for very slow feathering growth,which allows for a lot of on/off sequences in the time it takes for a feather to grow. The same barring gene ('B') when on a rapid feathering breed gives wide, coarse, fuzzy "Cuckoo Barring" as seen on Cuckoo Marans, Cuckoo Pekins (Cochins) and others. The barring gene also interacts with the gene on the E locus, all of the above examples being based on the E plus melantoics. Thus all these barring and cuckoo breeds would be self-black if they did not have the barring gene. This gene has greater pigment-restricting effect on black pigment than it does on red or gold pigment. When the barring gene is applied to the Wild Type pattern, the Crele variety is produced; and the barring on Columbian pattern combination is seen on Rhodebars, one of the autosexing breeds. It is to be hoped that most, preferably all readers of this book are already familiar with the principles of sex-linkage. They should be aware that the barring gene is not completely dominant to non-barring, which is why both dark- and light-barred males are seen, but only dark-barred females. In most breeds with a Crele variety, Crele OEG for example, the richer colored males that have only one barring gene are exhibited, but in the autosexing breeds only light males carry two barring gene should be exhibited and (in normal circumstances) bred from. The phrase "in normal circumstances" is used here becouse some inbred strains of autosexing breeds are sometimes revived by crossing with the other related breed, for example Brown Leghorn for Gold Legbars. Dark Crele males may be used as part of the process.