Article Gallery
Leave a rating
So, seeing as BRs are the only chicken I've had long enough to comment on, that's what I'll do. I got my first chicken from the feedstore about 8 years ago. Wonder of wonders, the first eight chickens I owned were pullets. I do have an uncanny sense about chicken-sexing, No--I just picked two pullets by mistake the first time. I had no idea that Barred Rocks could be sexed by color. And they can--apparently, if they have darkness down the front of their legs, it's a pullet. Roosters tend to be lighter than pullets as well. Anyhow, my two first chickens lived in a cardboard box for the first 6 weeks of their lives. At this point, I didn't really handle them much, because I knew less than null about chickens, and was slightly grossed out by their feathers growing in and looking so shabby. These two chickens were Caesar and Augustus (Gusgus). They lived in my closet.

Now, for being really socially neglected as chicks, they turned out to be quite friendly and intelligent birds. Caesar was a bit quirky--she wouldn't walk on the snow; and Gus was a little aggressive when she was younger--she bullied our stallion, the cat, and my brother, but she softened a little with old age, and shortly before her death would allow us to pick her up and carry her around. (She was eaten by a 'coon).

Both Caesar and Gusgus layed into their golden years, and were very reliable layers. They also loved routine (unlike our newer chickens!) and would always come back to the coop at the same time each day.
Whenever we called them, they would come running and were happy being our garbage disposal systems. They never went broody, and the only instance I remember of any illness is when Gus got a little peaked during her first moult. 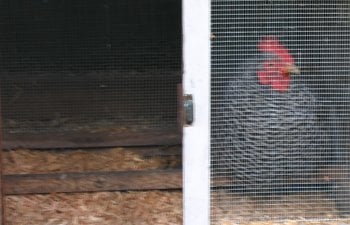 After Gus' death, somehow two BR chicks got stuck in the order with our flock-protecting geese... dunno how that happened! These (sexed pullets) turned out to be real lover chicks! Juno and Jupiter:
These chicks have actually imprinted on the geese, and the geese imprinted on me, so I'm grandma to these girls. When goosies were babies, all four of them would crawl into my lap and sleep for hours. (One word: Raincoat!) Lots of chicky poopies all over, but what great fun it is to have a little ball of fuzz want to snuggle.
Juno and Jupiter are only 4 months old right now, but they are still quite friendly, and insist on being picked up to go inside the coop. They still hang out with and idolize the geese, but also chill with the rest of the flock. I wish I had a picture of them a few weeks ago before they got to this gangly stage, but they looked like perfect bantam hens! 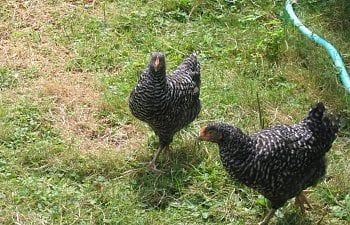 As far as information about the breed: My hens weighed about 5 pounds, the Plymouth Rock is a dual-purpose breed (that means that you can have a table bird for the extra roosters), and lays medium to light brown eggs. This summer I learned that very technically, only bantam BRs are truly "barred" in color, the standard birds are too "cuckoo" for most judge's tastes. In the above picture, you can see how Jupiter's (left) coloring is more uniformly straight than Juno's (right)
When born, they are all black with a white spot on the head. 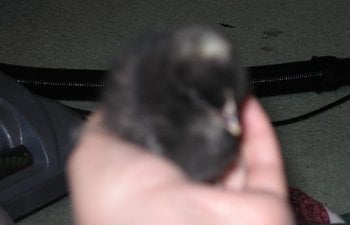