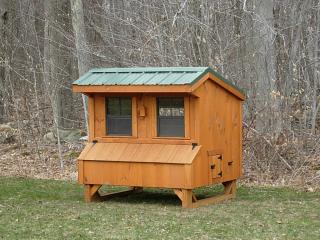 ) It's out in our barn in the tack room complete with water, feed and heat lamp.​ And here are our first 6 chicks, the Golden Comets! Meet Halley, Gale, Biela, Helin, Faye and Ikeya - yes, they are all named for astronomers who discovered comets Here's our second set of chicks, the Buff Orpingtons - Brenda's naming them after princesses. They seem to be getting along just fine with their older siblings! It was time to move everyone from the tack room to one of the stalls - we didn't want them flying out and not able to get back in! Plus, it was getting a little crowded in there so now they have room to wander!Phase 2: .Phase 3: This will be their next home, a pre-constructed coop from the folks at "The Barn Yard". It's out in our backyard in full view from all the windows in back of our home. We will be adding a run made of chain link fencing before it's time for the chickens to move in Phase 4: It was Graduation Day on May 31st as the girls were moved from the barn to their new home in the coop! Phase 5: Home, home on the range! Apparently they love wandering around the backyard now. journey of progression through brooders.
Loved the pictures along with the story of how you started out. Hope your girls are enjoying the chicken coop- I have one like that and I absolutely love it.
The coop page needs to contain more information about how it was built. Other than that, it is a great coop
Read more…

nice coop, how many chickens does it house?
Hi - It's been a while since I've been on this website and just saw your note - sorry about that! We've got 25 6-week olds in there now. Once they're about 4 months old, we'll move them to the main coop. It was pretty comfy in there with 12 full grown birds but they mostly just sleep in there - the rest of the time they were free ranging....