First up, we had a very upsetting event this week. We only recently found out that our white silkie was a boy, so our only two silkies were both roos. Two days ago, we came home to them fighting and the white one had a bloody head. My daughter was very upset about the whole episode.​
​
​
This is an example of a project I did with my crafts students during last school year.
They took blotter paper, folded it different ways, dipped the corners in concentrated Kool-Aid or paper dye, unfolded it, let it dry and then ironed it. Next, they created a design for a printing plate that would match up with itself and create a repeated image when printed over and over. They printed their designs on the Kool-Aid paper. Jessica chose a rooster design. I don't think she believed me when I told her that it was one of my favorites. I think the project was a great success. When they ironed the paper the room smelled like Kool-Aid. At the end of the project, we had a Kool-Aid party. 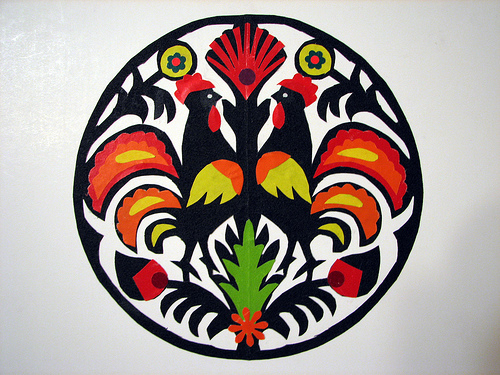 In 19th century Poland, people in rural areas created art to decorate their homes by cutting and glueing paper. The art form is called Wycinanki (pronounced vee-chee-NON-key). The designs varied from region to region, but in general were symmetrical and often included birds, frequently roosters. I showed my students this example when we began our paper cut project. Some Wycinanki from Poland are extraordinarily complex, but this one is relatively simple. I imagine the artist cut a piece of black paper in half, and then cut out the design, which is based on a circle. After glueing the paper down to a white background paper, the artist took other, bright colors of paper and cut out additional elements, such as the roosters' wings, and glued those down.​