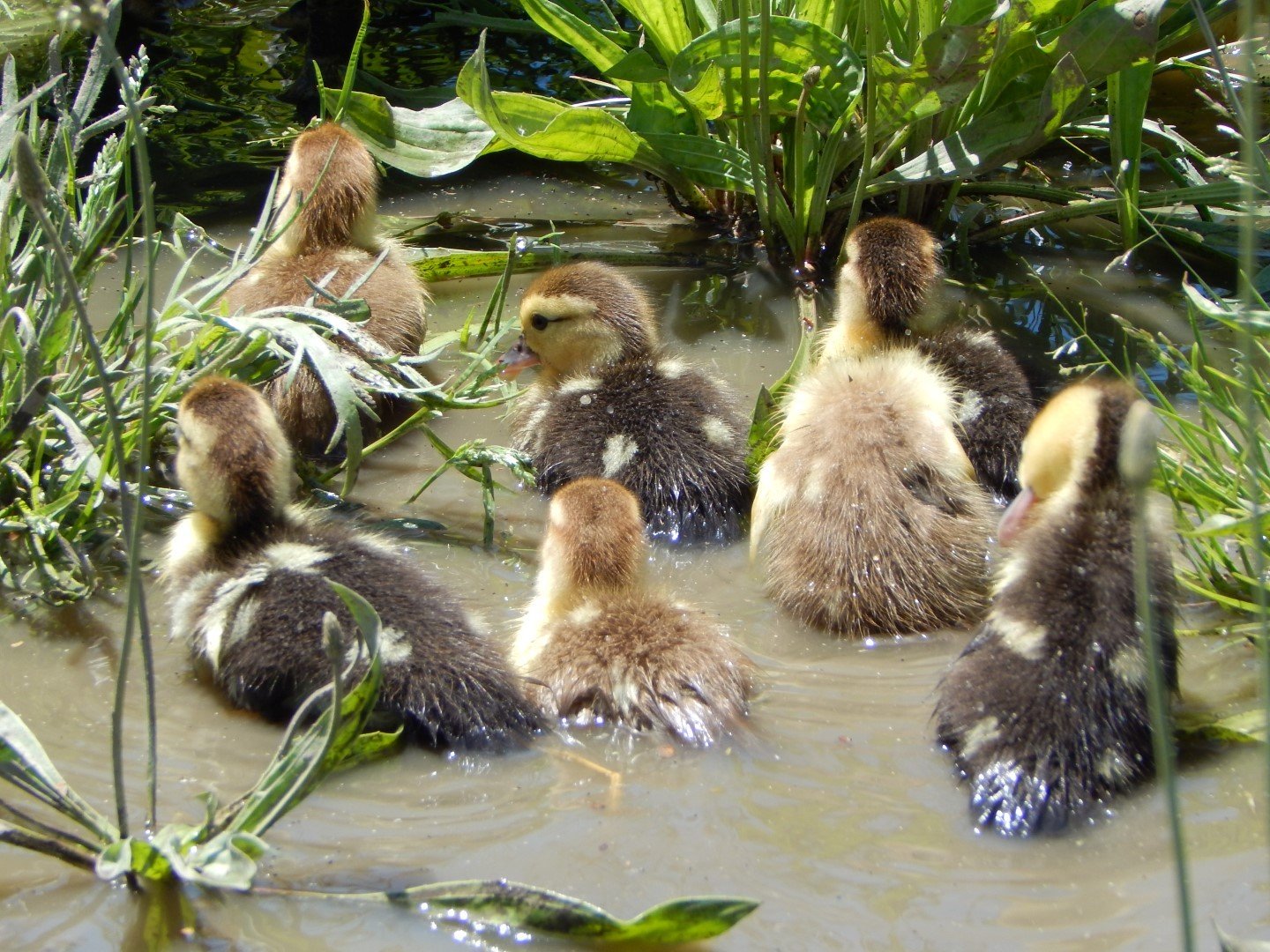 If you've ever bought chicks at a feed store or ordered them from a hatchery, you have probably come across birds labeled as Red Stars, Black Stars, Cinnamon Queens, ISA Browns, and the like. All of these are trade names for red sex link and black sex link chickens - that is, chickens that are bred specifically so that you can tell what gender they are at hatch depending on what color their down is.

If you raise and breed ducks, you might wonder if you could do the same; if you could breed ducklings that would hatch so that you can tell their gender right off the bat, without having to vent sex or wait to see if they quack or get a drake feather or, in the case of muscovies, wait until they grow enough that you can see the differences between the males and females.

The good news is, you absolutely can! Ducks have a sex-linked color gene called chocolate. Both muscovies and mallard-derived ducks have a chocolate gene that works in the same way, so this method of breeding for sex-linked ducklings will work for both.

Chocolate is a recessive gene that is linked to the Z chromosome. Birds are different than mammals in that their chromosomes are ZZ for the male, and ZW for the female.

Being recessive, chocolate usually would require two copies to express, and this is true for male ducks, since they have two Z chromosomes. Females, however, only have one Z chromosome, and due to that, they can only ever get one copy of chocolate, so it expresses with a single recessive copy. 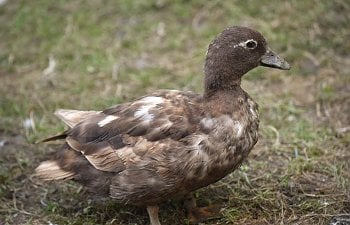 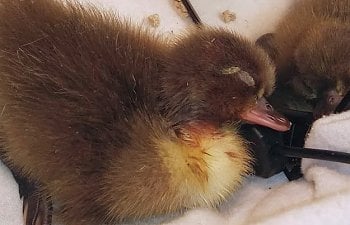 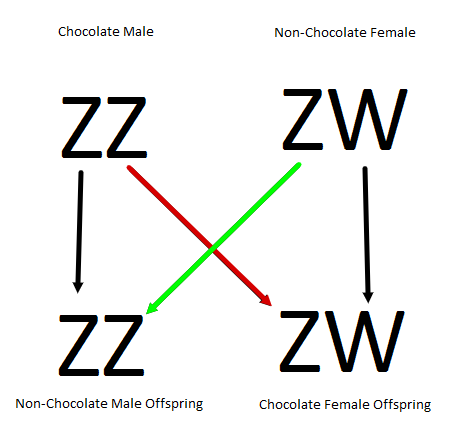 This will always work, but there are some color females you want to avoid.

In mallard derived breeds, it's best to avoid using any female (and, in fact, male) that has the blue dilution gene. This is because it can be hard to tell which ducklings from such a cross are blue or silver (males) and lilac or lavender (females) at hatch, since the down color is similar. The sex linking will still work, you just might not be able to tell which ducklings are which color at hatch, and that defeats the point.

You also want to avoid using a white female. This is because white is epistatic to all other colors - meaning no matter what color the duck would have been otherwise, if it gets two white genes, then it's going to be white. And it's recessive, so if your drake happens to be carrying a copy of it without your knowledge, then half the ducklings would be white, and there would be no way to sex them by down color. Plus, if you don't know the parentage of your female, it's possible that she is chocolate 'under' the white, which makes her unusable for sex-linked ducklings.

To make it a little easier, here is a list of breeds of duck that will be easiest for using to breed for sex linked ducklings. Some breeds of course come in multiple colors, so the colors you would want to use are also noted with the breed. Any male from this chart bred to any female will produce sex linked ducklings.

When starting out, you might have trouble telling down color apart on males and females that aren't just solid black or solid chocolate as ducklings, so for the easiest sex linking, try to use either a male or female (or both) whose color is based on extended black, so that all the ducklings will be solid colored. But all the combinations will work. If you don't know what extended black is, see this article. 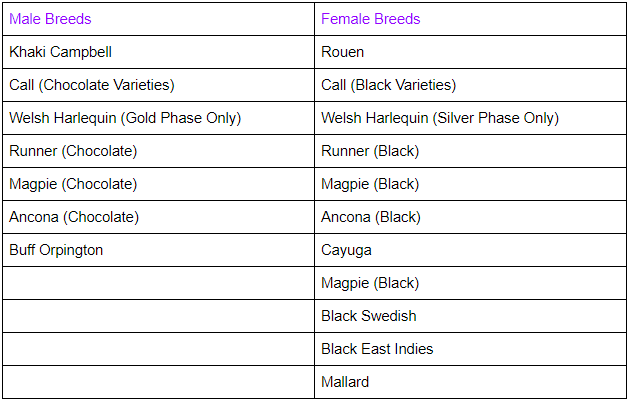 For muscovies, things are a little different. Just as with mallard-derived breeds, you need the male to be chocolate and the female not to be. However, the genetics for other colors in muscovies work differently than in mallard ducks, so it isn't the same as to which colors you should avoid using for a sex linked cross.

For one, white in muscovies is different. It is dominant, not recessive. One copy makes a bird pied, and two makes it completely white. Therefore, if you are using a chocolate pied male, you should not use a pied female, since a quarter of their offspring would then be solid white, and impossible to sex by down color. You can use a pied male with a solid female, or a solid male with a pied female, but both cannot be pied. 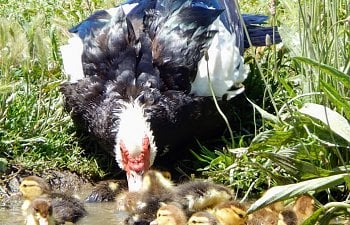 Muscovy duck with her sex-linked ducklings​
Like mallard derived ducks, muscovies also have other color genes that can interact with chocolate to make new colors. Lavender, for example, will interact with chocolate to make cream. There are also sepia genes and blue dilution genes too. I will admit muscovies are not my area of expertise, so I do not know how hard it would be to distinguish, for example, a cream duckling from a lavender duckling, but it might be difficult. For simplicity's sake it would probably be better to avoid using colors other than chocolate and black. All the pattern genes though, like barred and ripple, should be fine to use since those will not change the color of the duckling's down.

Breeding sex-linked ducklings is as easy as breeding a chocolate male to a non-chocolate female. If you found the color genetics behind this interesting and would like to learn more, this article will teach you all about the genetics behind colors in mallard-derived breeds. You can also check out the Ducks section here on BYC.
Reactions: 3KillerBs, ChaskaE, ChickForLife and 12 others

I did not see a percentage of accuracy. With chickens this type of gender determination would be about 75% accurate
Great article. I do not currently breed my ducks and I don't have the genes needed in my small flock to breed sex-linked. However, this was a very interesting read. I may one day decide to pursue sex-linked ducks if I have a larger property so I can have more ducks (and other animals) like I hope.

Reactions: turtlesgalore
Excellent and thorough explanation of what sex linked breeding is and how it is done!
Reactions: Pyxis
Read more…

I just had to say, I love the cover picture!!

So if I get a blue female swedish and 1 black male swedish would I be able to sex the chicks by color?
Very insightful post! This really deserves a spot in our featured items on our homepage! Congratulations!
Interesting article, but I still don't know how to identify what the male/female difference in plumage would be for my crossed offspring.
If I’m correct... does this mean if I breed my Pekin drake... and my buff Orpington (ducks) hen I would get grey and white ducklings and they would be girls and others would be black and white and mostly boys?

Duckbreeder2020 said:
If I’m correct... does this mean if I breed my Pekin drake... and my buff Orpington (ducks) hen I would get grey and white ducklings and they would be girls and others would be black and white and mostly boys?
Click to expand...

The male has to be chocolate for the sex link to work. To make it even more complicated the white of a pekin is actually hiding his true color so there's no way to know what color he passes to his offspring until you do a test hatch.
I have a male Muscovy that is black and a little bit of white and 2 chocolate females and a lavender. Will all the ducklings be black like dad or will other colours come through?
I have a Muscovy drake that is black and white a female that is lavender and 2 chocolates will all ducklings be like dad or will other colours come through?