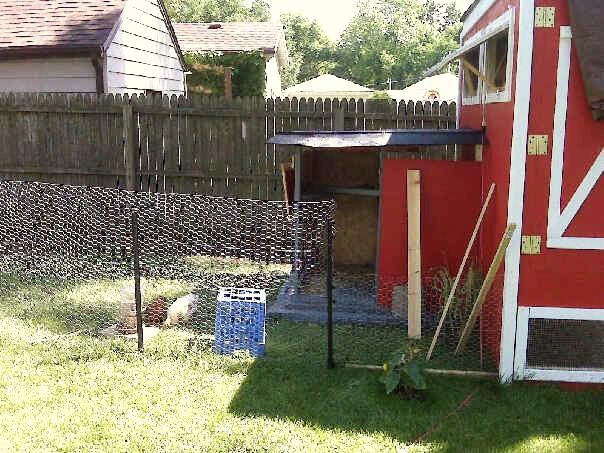 Staff note: We’ve been trying to find a way to restore the missing pics to this article but haven’t had any luck. Hopefully the author will be able to help us get the pics loaded back up!

Casa De Huevos!
Our Coop has finally been finished! I got the idea from another coop I found on BYC, and my boyfriend's father
was able to recreate it almost exactly the same, but we did make a few changes. Enjoy!

First they built the walls...

Then it was time for them to go up!

Then the frame for the coop floor and inside double doors was put in. The floor was also put in then,
but I can't seem to find a picture of that.

Then the support boards for the roof were put up, and then topped with plywood and shingles.

After the roof, we added the chicken wire to the run, and put a door in the run also.

The outside coop door to get eggs and the double doors inside the coop were also added.
All three windows were screened with chicken wire to provide venting.

The windows were then also covered to keep out rain, but they can be propped open to let in lots of fresh air!

My son did an excellent job of helping me paint and get things ready for the girls to move in!

Here are the finishings of the inside of the coop, including the nest boxes and perches:

Here is everything finished (except the chicken ladder) from the outside as well:

And here are the girls taking their first steps out!

A few days after they moved in, I also put up some roosts in the pen, and a small garden of lettuce and brocolli for them to eat off when it gets bigger.

*UPDATE*
` Of course.... I ended up with more chickens. ... And then, a few more.... and some hatching eggs...
SO, I needed more room!!!
My coop is pretty big as is, so I only added a small area to that, but they definitely needed more run area...
This is all still in the works, but here it is so far:
(By the way, I did this all myself, I didn't have the big strong professional men to do it like last time)

Here is the addition I built to the coop. (still needs trim, and a few other things added) The open space above will be covered with chicken wire as soon as I cut another hole inside for them to access the main coop.
this way, when the door on this section is closed, they will all be securely inside the coop

I just realized I didn't take a picture of the door on here yet, but you can sort of see it here: So far, I have cut out the first hole inside this section which leads them under the main coop and into the enclosed run: view from inside enclosed run: All it needs now is another door going up to the coop with a ladder, which will be added here: The new addition I made to give them more runspace, is currently just a cheap temporary fence to give them some free range space.
It will eventually be made more permament, but for now, they haven't yet tried to escape. So... now I can safely house my 16 chickens, with no fear of overcrowding or cannibalism

Great coop and run.
Thanks for sharing all the pictures in the design and build of your cute chicken coop. Hope the girls are enjoying it.
While I love the finishing and space this coop sports, it could use some better roofing. All in all, quite thoughtful!
Read more…