Leave a rating
We threw around tons of ideas for building a coop, from a mobile coop that we could move around the property, to a brand new structure in various places. Eventually, it became obvious that the old greenhouse on our land was not in a very good place for a greenhouse (not enough sun), but that the base was nice and firm and we decided to use it for our coop. 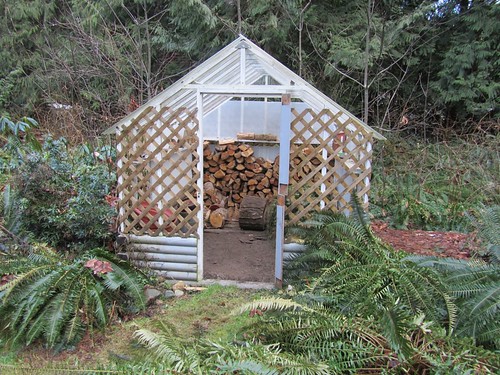 We had originally wanted to use the frame and just take off the roof, trellis, and plastic sides, but as we took down the sides it became obvious very quickly that the 2x2's it was framed with were mostly rotten. We are lucky in that one of our best friends is a construction worker who builds houses for a living, and he offered to come help us frame up a new coop.
The base is about 7.5'x10' on the inside. It seemed a bit excessive at first for the 6 chicks I'd planned on, but those 6 chicks quickly became 18 chicks and I've pretty much hit the limit of the coop already (and it's not even built!). Luckily, by the time fall comes around we only plan to keep one rooster, and won't keep any mean hens either, so once the weather turns and they'll be in the coop more they should have lots of room.
I used this coop and these plans for inspiration. So far we've spent more than we'd hoped: about $300 in lumber and hardware cloth. We'd originally wanted to try and use mostly recycled material, but the Habitat for Humanity Restore here didn't have much, and our Craig's List hasn't turned up much either. We do have shingles left over from when our roof was done though, so that is nice. Hopefully the time and cost will pay off in a good, draft-free coop the chickens will be comfortable in. I don't really care how it looks but I do want the chickens to be happy in it.
Day One
It was so neat to watch this structure go from a dilapidated greenhouse/wood storage shed, to a brand new, framed coop. There is still lots to do, and most of it will have to wait until next week again now, but I am so impressed with how much they got done today already.
Framing: 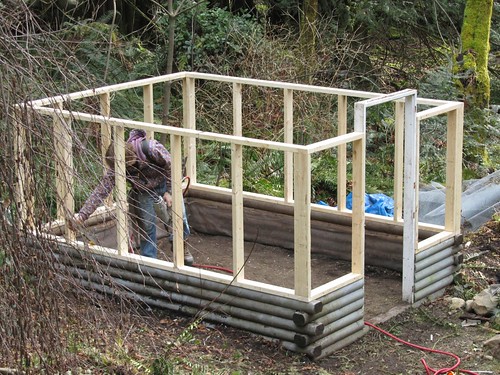 Getting the walls up: 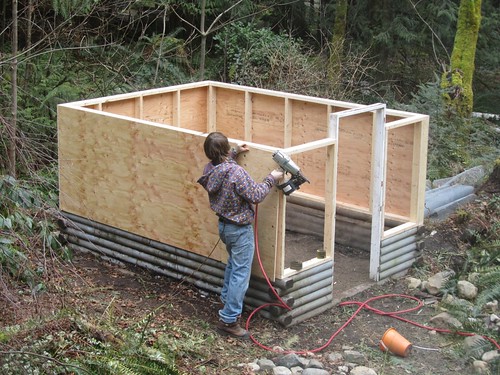 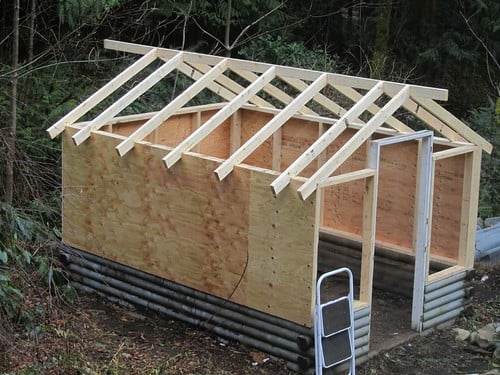 I have 8 chicks in a rabbit hutch brooder (about 10-12 sq ft) right now. Two are 9 weeks old, two are 5 weeks old, and 2 are 3 weeks old. The 9 week olds are more than ready to be outside I think (and while I adore these chickens more than I thought I would, I am ready for them to be out of my house too).