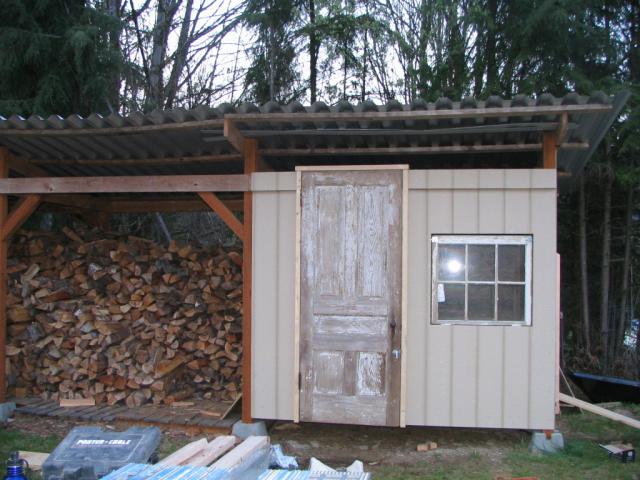 I didn't expect my husband to say yes to chickens but out of the blue this year, he did! I think he was hoping that he'd have a little more time before any actually arrived at our house but unfortunately for him, my friend gave me 5 chicks that week. We set them up in our living room in make shift brooders while we began arguing, er...discussing the future coop. You know how it is, you get a couple of chickens and suddenly you want more! A lot more!
Well, our original plan was to build the coop on the end of our shed. It would have been a perfect spot for it except that we'd had a dog run there for a few years and the ground was terribly fouled. It would have taken quite a while for it to be safe and healthy for chickens so being me I offered to let my poor husband build me a coop somewhere else, then move it. He's very sweet and was trying to figure out how to build something moveable that his crazy wife would be happy with and this is where the arguments began. Big is hard to move!
I won't bore you with the details of our squabbling since we did come up with a better idea. In another area of our yard we have a firewood shelter that had one bay open where we would park our utility trailer. I suggested we build the coop there and then he wouldn't have to move it. He loved the idea and we were friends again!

The first picture is BEFORE: Here is a picture of the work in progress. The coop now has a roof, a vinyl covered floor, two walls and nest boxes. The floor has hardware cloth covering the entire underside and up the inside of the walls about 6 inches all the way around. The coop itself is roughly 6.5' x 8'. A closer look at the nesting boxes. They will have an angled top piece to keep the birds from roosting there. Here is the end of the coop. The run will be off this end and will be covered with more hardware cloth since we have two eagles that regularly circle overhead. Here is a picture of the back of the coop. It's just ugly OSB because no one will see it but me. It was a bit less expensive so we went with it! I have an overhang of the metal roofing to keep me dry. The nest box doors are two separate doors with two latches and carabiner clips each. My husband will add a chain to hold them flat when open so I can set the egg basket on the door while collecting. Eventually it will have gravel along the backside too. A closer look at the doors. And now for the pop doors! Dh made a track for the door to slide up and down in that keeps the edges enclosed so hopefully nothing can pry it up. He also put a latch on that firmly embeds in a hole in the wood to keep the door closed. Then we added another carabiner clip just because I'm paranoid!
CLOSED: Here is a brillian idea from my DH! Our run isn't up yet so the first week the little chicks will be in the coop without access to the run. This means that when I come in the deal with things they can get out the people door. My husband added a "baby gate" to keep the little birds in. Yes, I know as they develop wings they can fly but this keeps them from running straight out. It also gives our kids an area to stand and pet them over the door without going into the coop. We have clipped the wings of a couple of the escape artists too. And here's a shot of it open: Here is the mostly finished coop. Here it is with the firewood shelter more in view: We'll paint it later this summer when we do our house and shed. After I get the run up I'll post pictures of that. I need to run out and snap a pic of the little girls running around in it too. Oh, and DH hasn't gotten roost bars up yet but hopefully that will happen soon too. I'll put up a pic of that when they're done. When DH built it he was very careful to seal up any opening so nothing can join them in there. We have the two windows that will have wire mesh over them soon so they can be opened in warmer weather. We also still need to cut in the ventilation and put hardware cloth over that as well. It's fairly airy at the moment and they're little but they will need more air flow before too long. We'll tackle it now so it's done before it becomes an issue. Oh, and he'll be putting a plant shelf under the window so I can put some potted flowers there.
Now to name it!

Good job here. Be good to have some finished pictures.
Good job on what I can see! I would have liked to see ml ore of the inside so I couldn't give more of a rating.
Read more…

Very nice
You and hubby did a great job! Sounds like you have used hardware cloth where needed to keep out all the critters and predators. Remember to add vents high up inside the coop for moisture from chickens and moisture from poop to leave the area. Most important! I have two different heights for my roosts, so those that want to roost high up can, and those that want to roost lower can also. They'll probably use the lower roost in the summer. Have fun with your new venture of chickens! It's a lot of fun!!!
what is this?