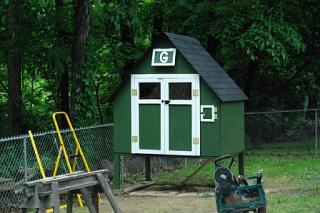 ChickenNoodle Coop ​
Welcome to my Chicken Noodle Coop page. I've always dreamed of having a small hobby farm. However, living in the suburbs and being unable to afford to pick up and move, I'm stuck with my half wooded 3/4 acre on a private drive in an unincorporated area 30 minutes south of St. Louis. Well. I've always liked chickens, but didn't know much about them. My husband is a city boy and not real keen on the whole farm animal thing. Sooooo....for mother's day last year, my lovely 16 year old daughter left with her father for the weekend and returned about 30 minutes later and I was presented with a Kentucky fried Chicken bucket. It held 4 baby chicks. My hubby wasn't amused, but who couldn't love baby chicks?! Sooooo...that was the start of my chicken farming and my research into coops. BYC has been my haven ever since. What a fantastic resource here! Well...anyhow...I designed my coop and my father helped me get started building. I'm pretty handy, but sometimes 4 hands are better than 2! I've looked and looked for my plan, but to no avail. I do have pictures though. I am a photo and chicken-holic.
Here's the start of the coop. It's a 4'x6' coop to house 2 red production hens and 2 australorps. My dad helping me frame the coop. The small door to the right opens to the nesting box and there's a screened vent under the hinged"G" to help with ventilation. There's an access door on the backside and a pulley system for the dropped down ladder thingy. The run is covered with chicken wire. We've had no problems with predators so far. Petunia, Casey, Ruby and Kiwi last year. They're all grown up now. Kiwi is no longer with us. She moved to my ex-inlaws coop because she was picking on Petunia badly. Last week I went and got 6 more baby chicks. I plan to expand the coop with another perch and 1 or 2 more nesting boxes. I also plan to build a 12x20 run off the back of the coop with better wire. Then I'll remove the existing run. I'm also planning to make the coop 6 ft tall with a galvanized metal roof, so I can enter the run area. I think a metal roof will help keep it less muddy and keep the possible predators from climbing the fence and just dropping in through some flimsy type of wire or netting. I'll also be able to halve the run temporarily until I incorporate all the girls together later in the fall. It has been a great endeavor. My husband is starting to get a little more used to the fact that he's now a chicken farmer. Uh Huh...That's right! Gerry The Chicken Farmer. After all... I DID put a big "G" on the coop!! How can he deny it??
Reactions: Homeputter and JojoChickens1

What a nice coop. Glad all your chickens get along now. I am curious how the drop down ladder thingy is working.

I would like to see more details on how the ventilation is done.
Read more…