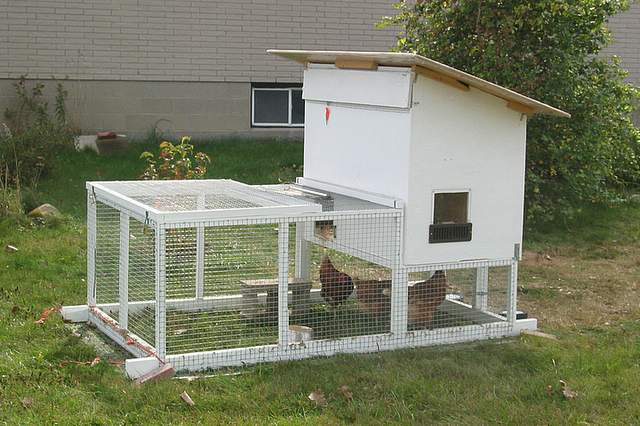 Ah yes, the roof... a thoroughly embarrassing construction of 1/2" plywood over which is stapled a, um, er, a discarded heavy-duty clear vinyl shower curtain. Go on, laugh. All I can say in my defense is that it's a last-minute substitution for the beautiful asphalt-shingled roof I orignially built, which weighed about 150 lbs and was just not practical. I am actively seeking a more permanent solution at local farm auctions and secondhand building supply stores, and I am confident I will come up with something equally bizarre but more durable before the shower curtain gives out. Er, at least I sure hope so. 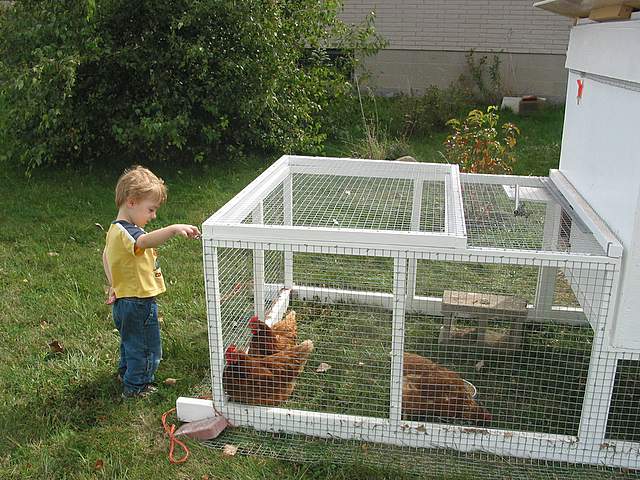 The pop-hole door to the chicken house is hinged at the top, providing a little 'porch roof'. The cinderblock serves as a stepstool for the chickens to get up and down to the doorway. I'd like replace it with something easier to move. Someday. Also someday, I will make the chickens a better feeder - right now they eat their crumbles out of a dog dish, here mostly hidden by Marigold the chicken.

Harry, age 3, is fooling with one of the two padlocks that secures the big "people door" atop the pen. If you ever make a pen like this with a top door for human access, I have two important suggestions. First, do not make the pen's walls exactly crotch height so that when you go to step into the pen after a rain you get cold and wet in unpleasant locations. Ahem. And second, when you attach the latches that accept the locks, put the loop part of the latch on the DOOR and the hinged hasp part on the SIDE OF THE PEN. If you do not, then when you are crouched in the pen and the top door blows shut, gravity re-latches the hasps and you are locked in and helpless. Is that the sound of chickens laughing? I'm not going to tell you how many times this happened to me before I smartened up and stowed an aluminum shim inside the pen for use in break-outs. (Slid into the crack of the closed door, it can push the latch hasp open). A smarter design would have avoided the problem altogether. 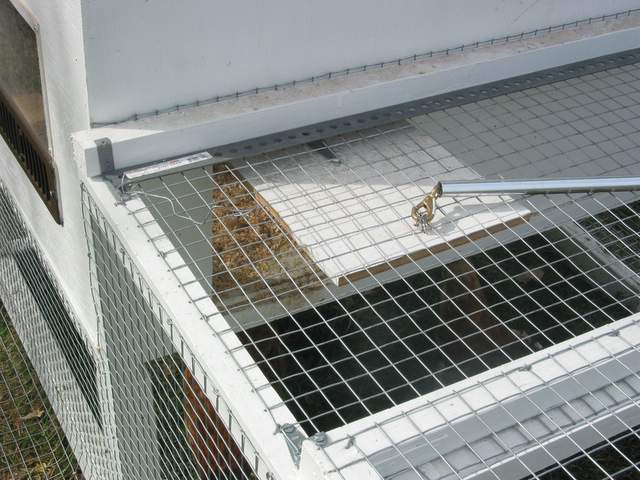 This is a close up of the door mechanism because I think it's a little bit clever. A stick (piece of shiny metal tubing of unknown origin, with some chain run through it and a brass snap on the end) is snapped to a loop of heavy-gauge wire near the bottom of the door. Pull the stick up to open the door, and the door will stay securely open by simply laying the stick flat on the pen roof. Then, to close the door... 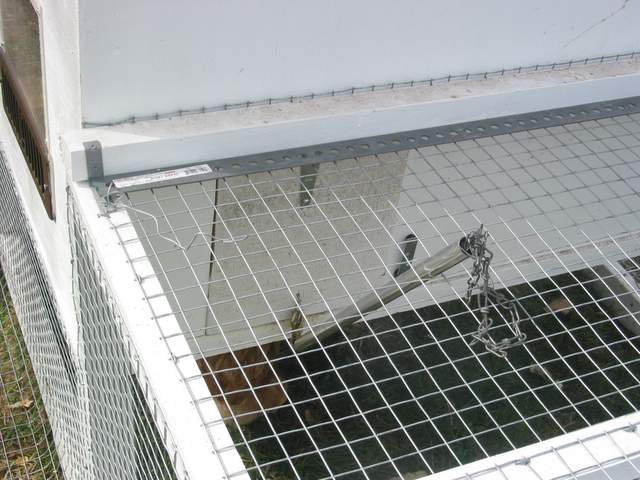 ...pick the stick up so it can slide down through the mesh and push the door shut. (Ignore the ugly loop of chain, it doesn't do anything, I just haven't lopped it off yet.) We do this every night at dusk to shut the chickens in. However if hungry predators ever managed to dig into the pen, the door could still easily be pried open, so at night we fully bar the door by means of... 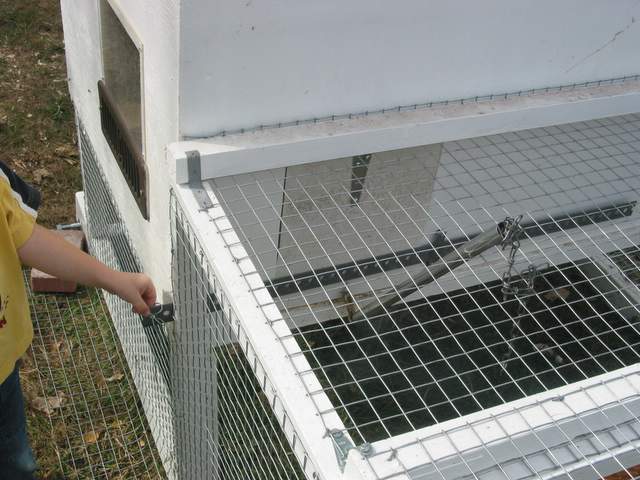 ... sliding a steel bar across the door and wiring the end to the cage mesh. The bar slides between the house and the pen frame, and the far end is held in place through a fitting made from a 2" mending plate screwed to the chicken house framework with a couple of fat plastic washers used as spacers. This photo also shows the window on the side of the chicken house, with a plastic adjustable vent below it that can be opened or closed. The vent is sold for use on floor heating vents in houses, but when I saw it I immediately thought "ha, chicken equipment!" 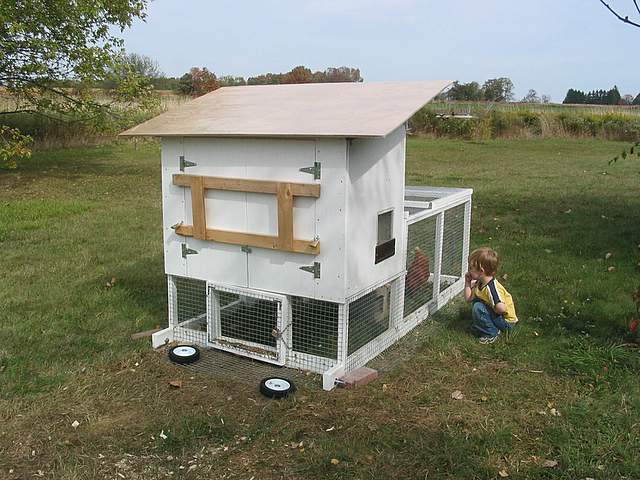 We have a LOT of raccoons here. This summer I rented a live trap and played taxi driver to 9 coons in just 6 days! We also have coyotes, weasels, and such. So here is my attempt at predator-proofing the front of the chickens' house. At night we "bar the door" as shown here. The top piece of wood has stout screws sticking down from each end that drop down through eyebolts mounted on the house wall; the bottom piece has eyebolts at each end, matching up with eyebolts on the house wall, to accept the two padlocks you can see sticking out.

Yes, padlocks. We've been warned that some raccoons can undo double-ended snaps, so I bought a six pack of locks all keyed alike. (You can see the key, flagged with a piece of orange fabric, hanging on the chicken house in the first two pictures on this page.) This shot also shows the detachable wheels for the pen. To move the pen, they fit onto 1/2" bolts installed onto the ends of the 2x4s nearest the camera... if you squint you can see one of the bolts in front of the nearest brick. 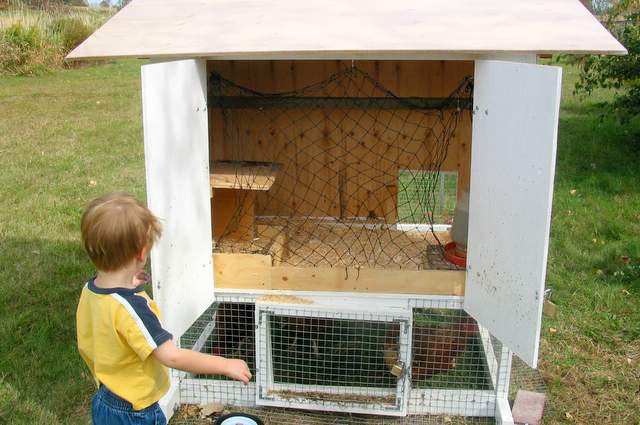 Harry reveals the inside of the house. No, the chickens do not play tennis - that's a piece of garden trellis netting stretched between hooks on the doorway frame in order to keep chickens from popping out unexpectedly and having to be chased around the yard. Hey, it's functional. Part or all of it can be detached for better access when cleaning out bedding or when refilling the 1 gallon plastic waterer (in right-hand corner). The structure in the left corner serves both as nest box (it's 14" square) and and as step-stool to help the chickens get up to the roost. It gets pooped on a little more than I'd planned for, but otherwise works really well. 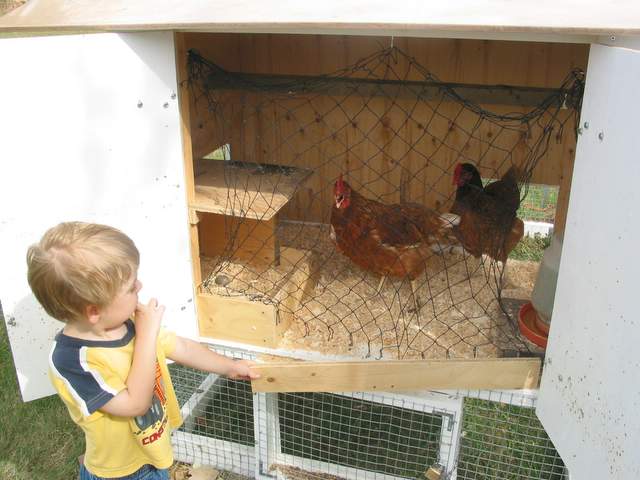 Here are Marigold and Maryanne (dunno why Matilda is so camera-shy) giving the grand tour. The grey thing in the nest box is an egglike rock that reminds the girls where to lay. Harry is demonstrating that the sill is just friction fit into the house and is removable to make cleaning out the house MUCH easier. 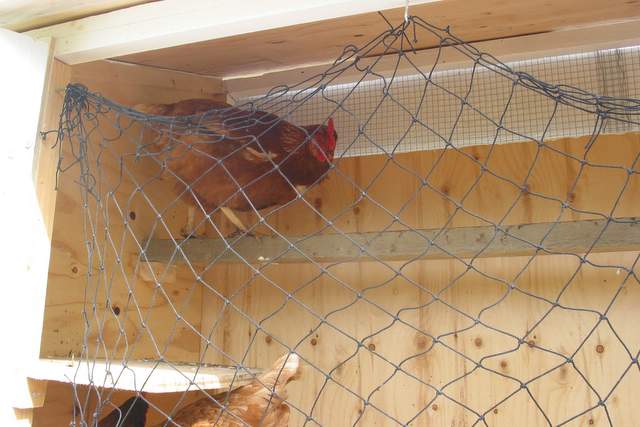 Finally, here is Marigold (she's certainly not camera-shy!) demonstrating use of the roost, while Maryanne (well, okay, one pathetic tail feather's worth of her) demonstrates use of the nest box.

This is not a large house for the chickens; I would call it snug, but not too excessively tiny for three standard-sized chickens. I'm not sure I could've made it any bigger though without making the whole assembly too hard to move. And it does get cold at night around here, even in summer. So, this seems to work okay. As long as we have no more than three chickens, that is. Hm, next year.....

Some of the explanations are a little hard to understand, but otherwise it is a great article and awesome coop!
Reactions: gardenofeeding
Great tractor coop build!
Reactions: PioneerChicks
Read more…

Thanks for the tour of your coop! I thought your opening and closing of the coop door was pretty good stuff too! Lots of great ideas!
very nice coop. thanks for sharing
Really nice build, and the article is good too!