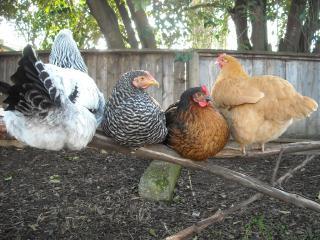 Hello and welcome to our happy hens page!​
(last updated: 01.15.2010)​
UPDATE!! 1/23/2010 We got 3 week old chicks today! 8 EE's, two RIR, and two BR's!! They're sooo cute!​
We got our pullets on October 10th 2009 at 11 weeks old. They are two Barred Rocks, two Easter Eggers, one Black Sex Link, one Light Brahma, one Silver Laced Wyandotte, and one Buff Orpington. I've uploaded a few newer pics of the girls. The first is actually still an old pic but the only pic I have of them where they are all together and aren't showin off their money makers at me. They are 24 weeks old now and 5 of them are laying. They all have different colored eggs so it makes it easy so far to tell who is laying what egg. Not like we aren't out there all the time watching them from the chicken door who is in the box 20 times during the day... The huge Light Brahma (money maker show in second pic) and our Sex Link (third from left in second pic) still aren't laying and we assumed they would have been laying first. Our barred rock runt in the pic is the other one that isn't laying incidentally. It's been really cool to watch them grow from small'ish chickens to laying pullets. They have been a blessing to have as "pets" and wonderful providers of breakfast! They have been my favorite out of all the different animals we have ever kept. 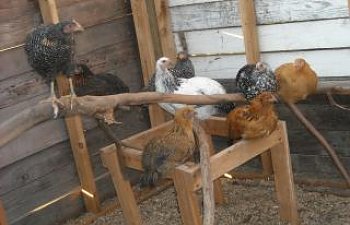 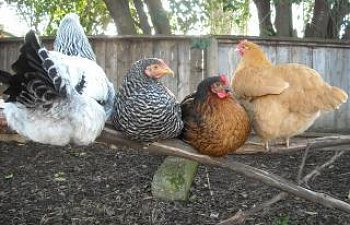 ​
When we moved in there was a dilapidated coop in the backyard. It was the tale-tell sign that this was the right place for us. We had talked about having chickens for years and wanted to keep them in the next place we lived at. Anyways, this coop was a piece! It had 2x4's laid out across the sides with a 2x3 holding most of it together for the "ceiling". The middle picture highlights this feature. The "ceiling" was a bunch of random sized pieces of plywood, covered with plastic, one side was covered with composite shingles litterally thrown on top. The overall feel of the coop reminded me of the seemingly haunted cabin in the back of the house I grew up in. The little cabin was dilapidated as well and I had only been in there a time or two. It had some very old school desks in there with all the cobwebs, etc. and the place freaked me out! This coop had the same feel to it... 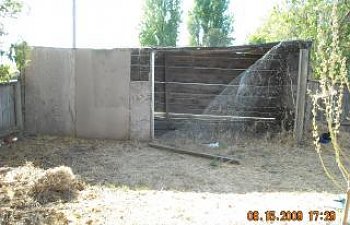 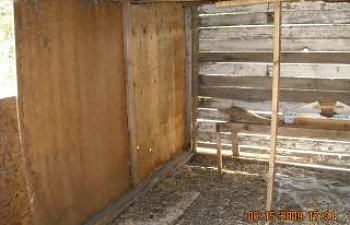 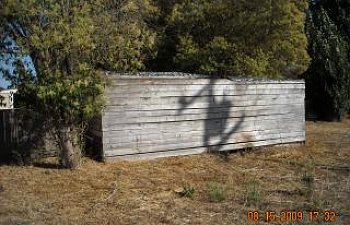 ​
I started by tearing off the roof, giving the place some well needed sun. I left the sides alone but framed them. I set two posts on opposite sides of the middle for some added stability. I had no ideas for roofing because the cost to buy new corrugated metal roofing was going to be rediculous at Lowe's and Home Depot so we have been looking for used sheets for the time being. We have been using some 8mm plastic sheeting we bought years ago but never used. That is working amazingly well. It has holes in places where one of the farm cats has sat up there and clawed at it but she sits up there all the time and it holds her real well. Funny to watch her kinda keep a lookout for the flock. I'll get a pic and add it here.
A few days before we couldn't take it any longer, broke down and went to buy our flock we came to the conclusion that we had been building a really strong run after all this effort! We knew we were only getting a few pullets to start with and for the time being they were going to be small. We realized that they really needed a smaller enclosure to keep warm instead of this gigantic coop we were remodeling. We borrowed a rabbit hutch from my friend and had them sleeping in there until they were about 17 weeks or so. We were trying to find some free wood to build a coop. We got enough and then some. There was a retail store opening up in town and they had thrown all the plywood and 2x4's they had used to build the storefront cover used while they were building the store. We had a source for the roofing as well but that went south. It seems we are forever doomed forever to have jenky roofing...
I had been roaming through BYCs' coop designs and began to design something similar (in my mind) to one that looked simple enough and had a decent plan. I had a lot of loose sketches for designs but I'm no artist. No carpenter neither but that's another story. I came up with something that I could make with what materials I had. Soon after, the building of the real coop began and many pics of that were taken but I'll try not to bore you with 800 pics of essentially the same thing. This story continues on the next page.

We are composting all the manure in a compost pile next to the coop along with cow manure and all kinds of other things that the chickens try to get at constantly. We have roughly 3000 redworms by now composting coffee chaff from a local roastery and other odds and ends that we give them weekly. They are really starting to take off and it looks like we have a healthy rate of baby worm growth after farming them for around 5 months now. We started our first garden that was thrown together late due to when we moved in and it did remarkably well with a few pumpkins and a bit over a dozen gourds. Remarkably well for our lack of prior knowledge but superb enthusiasm. We even sold a gourd due to it's aethetic appeal! HA!
We are very excited to be living outside of Petaluma, Ca., a fairly small city that was once a poultry capital. We live on a semi-retired dairy farm that holds Holstein heifers, pigs, rabbits, dogs, ferrel cats, miniature horses, more chickens at the neighbors house and we are having the time of our life! We are working on getting a dairy goat project going in the spring with the neighbors and a few projects with the milk in turn. A garden is in the plans as well fairly soon an who knows what else! Always more to add to the list! Thanks for checking out my BYC page but don't stop there! Go and check out my coop page! It's just about done~ 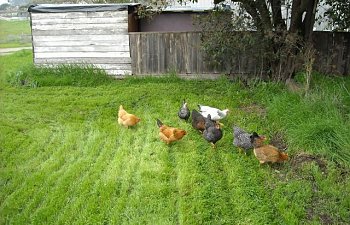 Nice reuse of the old shed, wish there were more photos showing the steps it took to remodel it into a coop.
Would love an update!
Your chickens look nice and comfy