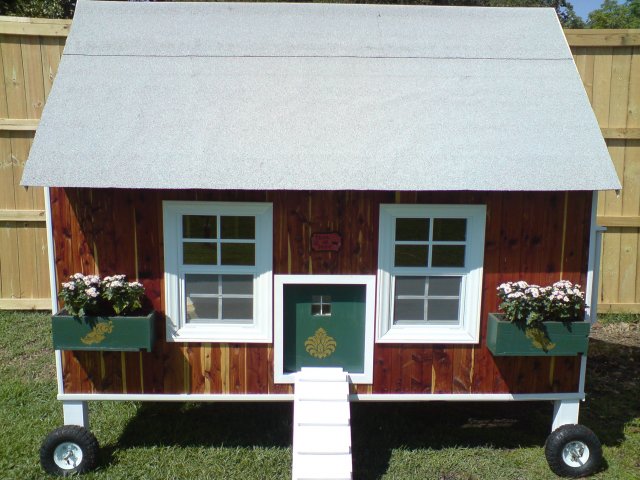 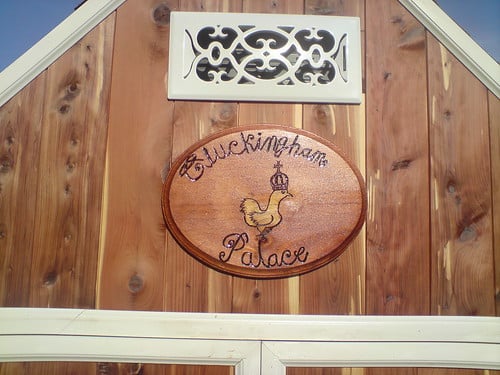 Our coop has been officially named!!! A big THANK YOU to fellow BYCer The Chicken Lady for suggesting it.
On to the Construction.
Here is our coop in a finished state. First thing I have to say is we are true backyard chicken keepers. We live smack in the middle of town, a nice neighborhood in the 'burbs, with a large lot. So the design of this coop is smallish for a real flock of backyard birds. Plus it's posh enough to keep anyone who sees it to think it "belongs" in an average backyard living space. It also is fairly inconspicuous, which is nice, it looks more like a child's playhouse than a chicken coop. So it could be stealthy enough to be used in areas where you are keeping outlaw chickens. If you like what you see and want to know more about it, and how to build one of your own keep on reading. I looked at other peoples coop designs and came up with my own. Stephanie gave me the details of how she wanted it to look from the outside, we went to the hardware store and picked out the materials together. Like I say, she is my beautiful muse. It is 8' long 4' wide (not including the nest boxes). The overall height is about 7' at the peak. The roof is at a steep angle to match our house. When I first drew up the plans and priced it out it could have cost about $200 in materials. Although we have about $500 in it since we wanted this to look very nice and like a little cottage and not look out of place in the yard. We also decided to put it on wheels and attach a hitch to it, so it can be pulled with our lawn tractor when needed.
Here is what the coop looked like at the framed up stage, this was done in the garage to make the work easy, and since it is on wheels it can be moved into position when needed. The nest boxes are exterior and and can be accessed from a hinged lid for easy egg removal and cleaning. Since they are outside the coop, it greatly increases the usable living space inside.
The floor is done with 1/4" hardware cloth. It can be seen in this pic. The birds will be allowed to free range our entire backyard which is about 1/3 of an acre. The thought of the wire floor with the wheels is that the poop can fall down and act as fertilizer, then we can move the coop every few days to a new patch of grass. It will also allow us to easily hose out the coop when needed. The wire floor should not be a problem except for a handful of cold days we have in the winter. For those really cold days (less that 2 weeks total a year) the floor is easily covered or a heat lamp can be added. You can start to see the coop coming together well at this point. We decided on red cedar siding (which is really 1/4" cedar closet liner). I then used 3/4" styrofoam insulation and a heavy gauge vinyl as an interior "wall". that should facilitate easy cleaning of the walls inside when needed.Both ends of the coop open completely - 2 doors on each end - those are also for easy maintenance and cleaning. On one side there is a feeder built into a door and water on the other. You can kind of see it at the back of his picture. I had to tow it out of the garage to get the roof started, since at it's crest it would not make it out if the roof was installed inside. For reference the fence is 8' tall and the peak of the roof is about 3-4" under that. We decided on a pop door that would slide up and down. It was a bit of an after thought that was decided on after the coop was framed. If I was building another the windows would be a little further from it. The windows are the real deal, double paned screened house windows. Another thing I would also have done is used a different roofing material, I have never liked the rolled asphalt shingle, but we used it due to the cost of the coop getting up a little high. In the future I will probably cover it with another type of roofing material. We also plan on adding a couple of flower planters beside the windows on the front to make it even cuter (I know cuter is not proper, but it sounds right here). We are making a wood sign to place under the top vent on the windowed side of the coop - it will say something like "Haustierhühner" (pet chickens) or "Hennehaus" (hen house) - update we have decided to call it Cluckingham Palace

. The "vents" are actually floor AC vents from Lowe's, they are adjustable and the white outside is PVC, I covered the inside with screen to help with insects. Stephanie has painted a nice scroll design on the pop door.
Roosts:
There is well over 30' (not including the shelf in front of the nest boxes) of roost space, plenty for our 10 birds (and a few future additions to the flock).

None of the roosts are over one another to prevent pooping on each other. Since the floor of the coop is open mesh to facilitate droppings to fall through, no droppings boards are used. You really can't see the top most roosts they are in the tremendous space that would be an attic in a house. I put them up there since the chickens like to roost high. As you can see I put ladders for the chickens, since most likely wings will be clipped. Also no roosts are attached from the bottom leaving the entire floor open. This was done so in winter it will be easy to cover the floor if needed. Covering the floor will be a simple matter, I purchased a 1/2" thick roll out rubber truck bed liner from Tractor Supply Company. The beauty of the bed liner is it is the perfect size to cover the chicken floor (48x96), as well as being easily cleaned. It can also be easily removed, rolled up and stored when not in use. It should also provide enough insulation for the floor for our very mild winters. The truck bed liner cost only $30, not too bad!

Really that is it, it is a generally easy design to construct, and could be modified to be smaller or larger based on individual needs. The ability to move it around the yard is a big plus.

Here are a few more pics of the coop in it's finished state. I have finished the additions of the accessories we had planned. We added flower boxes, a name plaque, the pop door ladder (which hooks on for easy removal when moving the coop). Also above the pop door is an area to hang a seasonal decoration, right now since Halloween stuff is out in full force at the stores, a trick or treat sign is hanging there. We also finished painting the trim, stained and sealed the siding, and added some decorative painting designs on the front of the flower boxes. Beautiful!
nice name
I Love this coop & the name!! The portable unit is terrific..I'm going to have hubby build one or somewhat similiar. Thanks, from a newbie.
This is really nice. My husband asks" is the hardware cloth floor hard on the chicken's feet. or do you cover it with pine shavings?" What kind of "vinyl" did you use on the walls?
I love the design. I have been trying to find the plans for this coop for a year now. If you have the plans would it be possible to obtain a copy?
Great idea with the bed liner as winter insulation! My coop is going to have an open mesh floor, and I was worrying about wintertime draftiness. Did you order your bed liner online, or get it in the store?
Do you still have a materials list for this outstanding chicken palace? If so, I would like to receive a copy if it's not too much trouble. [email protected]
I love it. If you're willing to share I'd love to build something like it.
Absolutely charming! We have 4 beautiful new babies and we are so excited about building our coop. Love the design and I would love to know if you have or where we can get the plans, materials list etc from. My oldest daughter learned the cycle of life in 2nd grade a year ago and spent 30 days turning, bonding, and bringing these chicks to life. When it was time to say goodbye, she and myself were devastated. So I went in to buy deer food the other day and then 48 hours later we are the proud new parents of Butterball, Cheetah, Spot, and Snowflake. We need to build them a grand home and love yours. Thanks so much for your feedback! The Henshaw Family
how much did it cost to build? What was the materials list?
Everyone above is right. This is the best looking chicken tractor ever! Would you be willing to share some supply do's and don'ts and how you drew up your plans?
OK, I'm new and have been designing coops and then looking for plans - nothing even close! But your coop is like my idea on steriods! Please, please, please, if you have a basic material list/building plan or anything that will help a slightly able, yet greater challenged (builder) to complete her dream mobile coop. I have made my mobile part - to many hawks, foxes etc and loose dogs, killing my free range babies.
Thanks - please excuse the begging.
Congratulations, we've chosen one of your pics for the CC-POW. Thanks for posting your coop design & pictures to our "Chicken Coops" pages! You can find more info about the CC-POW here: CC-POW Process
This is awesome!!
lovely!
Exact dimensions of my new coop , might borrow a few ideas from your coop . Great job , love it !
Wow! How awesome! What a great job.
Great design, beautifully executed

Awesome job. Great work fitting the trim especially. I see houses that aren't built with that level of attention to detail. Even without the 'jarhead' moniker I would have guessed military.
where did you get your windows