Diagnosing causes of malpositions and deformities in chick embryos 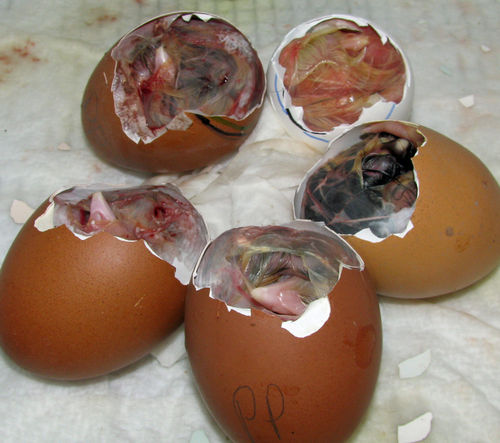 Causes of common malpositions and deformities in chick embryos

​
The most common malpositions and causes


Studies have found that the incidence of embryos unable to hatch due to malpostions varies from 1.2 to 1.8%, with an average of 1.5%. Malpositioned embryos are often unable to pip the eggshell and/or are able to pip, but unable to hatch, due to improper positioning within the egg. The most common malpositions are:​
- Head between thighs
- Head in the small end of egg
- Head under left wing
- Head not directed toward air cell​
- Feet over head
- Beak above right wing


If a chick embryo is provided with the correct environment (correct temperature, humidity and adequate rotation of the egg) it will position itself around 17-18 days of incubation for hatch. The correct position is with the head tucked under the right wing, with the head directed toward the air cell, which should be in the large end of the egg. However due to internal and external factors the embryo sometimes fails to do this. There are numerous reasons that malpositions occur. The common reasons for incidences of malpositions are:​

Chick embryo malformations are mostly caused by incorrect feeding of the breeder flock, resulting in poor quality hatching eggs, or incorrect incubator settings. For a break down on the effect of incorrect nutrient levels on embryo development see this article. The most common malformations seen in chicks are:

I like this article. Quick reading, points made clearly. Enough information with link to further studies should one be interested. Mainly aimed at those who incubate eggs but the information is still relevant to those who let broody hens sit.
Reactions: sumi
I see so many posts about malpositioned chicks--Much more than 1.5% of chicks.

Good article to explain what it really is
Reactions: sumi
I keep coming back to this because of incubation problems and then developmental problems. Thanks for putting this out here and making it so accessible for the community!
Reactions: sumi
Read more…

Very informative article! Helpful for diagnosis hatching issues!
Good job!
What would cause them not to absorb their blood vessels and hatch on their own? they did absorb the yolk completely.
You must log in or register to reply here.