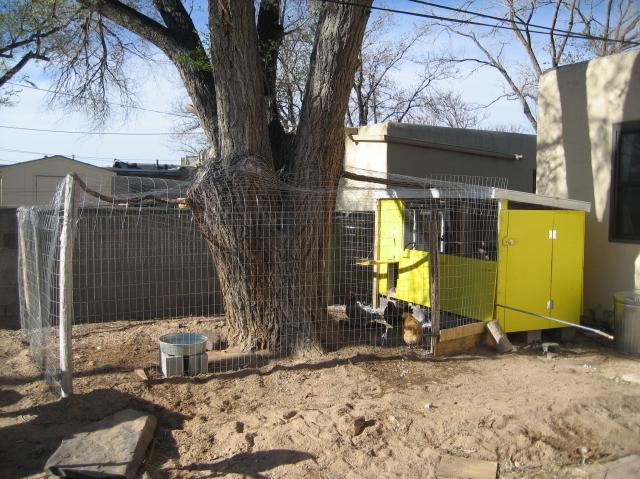 The 5-sheets-of-plywood, shed-roof coop! ​
This is clearly a coop built by a new homeowner with no scrapwood pile... but them's the breaks and I wanted a coop! Here's what I bought:
12 cinderblocks
4 pressure-treated 2x4x8's
20 regular 2x4x8's
1 4x8 sheet 3/4" plywood and 4 sheets 1/2" plywood
10 hinges and several hook-and-eye latches
20' of 36" wide 1/2" hardware cloth
100' of welded fence (the minimum roll size, but now I have enough to make another little enclosure if I need to)
My fiance was in Africa but my cousin came to visit and she made all the difference! Since I wanted the roof to be "about" 1 sheet of plywood, I ripped 4" off the 3/4" sheet we were using for the floor. I wanted to make the two squarish sides of the coop out of 1 sheet, so it had to be 4' high on the tall side. The plan was to make 3 of the 4 walls as shutters that would fold either up or down to allow lots of cross-breeze in the hot summers here, but which could be closed up during horrific sand storms of April.
First we leveled the cinderblocks for the foundation, then we cut the pressure-treated 2x4's to length and nailed them to the bottom of the floor and just set it on the cinderblocks. It's New Mexico, so I'm not terribly worried about the floor rotting out - I was more worried about my chickens pecking at pressure-treated plywood, which is why I used regular PW and why I didn't paint the inside of the coop. Then we framed up the two long walls, one about 4" shorter than the other. I know 2' centers aren't recommended for houses, but we were slightly materials-limited. The other change I would make if I did again would be to frame out the windows. It would have made both attaching the hinges and putting up the hardware cloth SO much easier. Lesson: don't skimp on 2x4's! Frame out everything! We cut the panels to size and screwed them in with deck screws: Once the walls were all panelled we nailed the bottom plates to the floor and got everything plumb before nailing the walls together. It would have been a lot easier if I had actually framed out the people-door - I had to use blocking to be able to attach the door with carriage bolts. I actually had to use a lot of blocking. Framing would have been more straight-forward. We got this far in two half-days, and finished just in time to go get corned beef and cabbage for St. Patrick's day! In this picture you can see two of the folding panels - these ones both go down from the top, and the one in the back of the coop folds up from the bottom. Though I may end up adding paneling on the inside because when you just have hardware cloth going down to the floor, duh, all the bedding flies out! So that window has been shut so far. Flash forward a few days - I used a framing square to cut out the appropriate right triangles from the roof rafters (rise = 4", run = 4'), but I forgot that the *whole width* was supposed to be 4'. I cut the rafters to 4', nailed on the top and bottom plates, and had a frame that was 4'3"! But luckily I still had the 4" strip I'd ripped from the back wall, so I used that plus a full sheet to cover the roof. And if I have to put another layer of plywood on to put roofing nails in without having them poke through, I have the 4" strip I ripped from the floor. So I'll only have to buy one more sheet of plywood. Ah, my modular life!
Anyways, once I had the frame done, I got it up on top somehow and nailed it all down, then schlepped the sheet of plywood up and nailed that down. Voila, a roof! Then I put in all the hardware cloth with a staple gun, which was a long process! I did not realize that it is truly a 2D material. Think of it like wood, and design with that in mind. In this picture all the windows are open (you can see through to the block wall behind the coop). I got some branches and nailed them in for roosts. You can also see the corner of the next boxes, which I *was* able to build out of scrap wood! The nephews were very excited to help spread the bedding. You can see the nest boxes in this picture. I built two because I'd read one for every 4 hens and I am never planning on having more than 8. So far they all like the one further from the door. And here are the ladies that I got from a local feed store. Like I said, I tried to minimize painting anything they could get their beaks on. The run construction took a few more days - with help from boyfriend and his family, we sunk posts, buried the fencing, and covered the top. We buried it about a foot except where tree roots were in the way. I still have a stockpile of cinderblocks to deploy if anybody decides they want to be an escape artist. One thing I wish I'd thought of here is that all the neighborhood birds are pretty psyched that I'm putting out so much food for them - and they can all fit through the fencing! I'd really rather not have pidgeons in with my chickens, so I may do an overlay of poultry netting soon. Anyways, here's the coop for now. I still need to roof it with something. My new favorite thing is tossing a tomato in and watching them run around the tree playing keep-away. In this picture you can see the pop door open. There's an eyelet on the door and the string runs through a shelf bracket and up into more eyelets across the front of the coop and around to the people-door. There's a brass ring and two nails for the "open" and "closed" positions. The pipe you see sticking out is 1/2" conduit which slides through two guides to lock the pop door when it's shut. I just need to find my tubing cutter and trim the thing!

Nice coop build! The article could use a schematic.
Awesome! Loved the materials list and the descriptions!
Seems well thought out and executed. Lots of details in the article.
Read more…