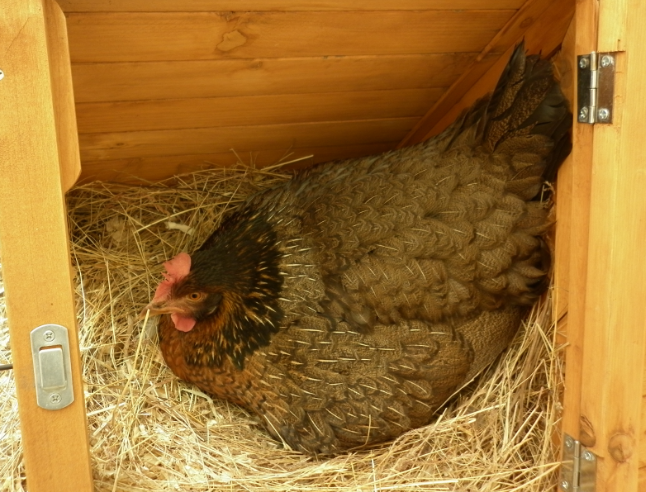 Everyone wants to get the most out of their birds and not just eggs. People want happy, healthy birds. I have listed some things you can do to keep your birds happy healthy and productive.

​
Genetic pattern of the breed of hen

Although early starters lay more eggs, maturity too early results in many small eggs. These small eggs are called pullet eggs and are just as safe to eat as any other egg. The reason they are so small id because the pullet is not completely grown , as she matures and gets bigger so will her eggs.

Selective breeding is reinforced by good sanitation and vaccination. You would never want to breed an ill chicken they could pass the illnesses down to future generations and you would have a constant battle of you hands. Always breed the healthiest chickens together the more generations and that have healthy chickens the more resistance they build up to diseases.

Of primary importance both during the growing and laying periods, controlled, low-intensity light can be used to delay sexual maturity until the bird's body is big enough to produce larger eggs. Today's laying hen doesn't need to depend upon the sun to tell her when laying time has arrived. Intensity and duration of light can be adjusted to regulate production in the Fall and Winter when the days are shorter.

How much a hen eats depends upon the hen's size, the rate of egg production, temperature in the laying house and the energy level of the feed. In general, about 4 pounds of feed are required to produce a dozen eggs. A Leghorn chicken eats about 1/4 pound of feed per day. Brown-egg layers are slightly larger and require more food. Egg quality is affected by the type feed. Shell strength, for example, is determined by the presence and amounts of vitamin D, calcium and other minerals in the feed. Too little vitamin A can result in blood spots. Yolk color is influenced by pigments in the feed. Maximum egg size requires an adequate amount of protein and essential fatty acids.

Since more is known about the nutritional requirements of the chicken than of any other domestic animal, it is not surprising that rations are scientifically balanced to assure layer health along with optimum quality eggs at least cost.

A relative humidity between 40 and 60% is best.

Molting, or loss of feathers, is a natural occurrence common to all birds regardless of species. As the hen ages, egg quality declines and, at about 18 to 20 months of age, molting occurs and egg production ceases. After a rest period of 4 to 8 weeks, the birds start producing again.

Housing is a very important part in egg production. If your hens are comfortable and not stressed they will lay better. If you free range all day, they are likely going to lay in tall grass and you will be losing those eggs. You can still free range just later in the day after most have laid. Chicken behaviors is also and other important role in eggs production. As mentioned above some hens love being broody, a broody hen is when a hen sits on eggs for several weeks trying to hatch them. Even if they are fake eggs she will sit on them, some even sit on nothing. But they will eventually stop sitting either when chicks hatch or they just give up on the fake eggs. There are also ways to break a broody that include isolation in a wire cage for several day or ice packs under her in the nest. Another chicken behavior that will put a dent in the eggs you are able to gather is egg eating. Egg Eating is a very bad behavior that is hard sometimes impossible to break. Sometimes eggs get broken accidentally and the chicken will eat it, that does not make them an egg eater, but if they break the eggs purposely and eat them they are egg eaters. One more behavior that can affect production is hens guarding the nesting boxes, some hens might guard a nest and chase other hens off and make those hen lay else where and if you free range that will most likely lay in tall grass or somewhere hidden.

Thanks for the great article. I feed my hens layer pellets southern states brand. But if I don’t put calcium in with their food three nights a week their eggshells start to get very thin shells and break. Why isn’t there sufficient calcium in the food to keep the egg shells sturdy?
Reactions: Bonnieboo, Queen of the Ranch and Chicken xto
A well organized article with some interesting information.

I was a little surprised by the suggestion that regarding laying, today’s birds don’t need to rely on the sun... may be true but doesn’t feel in keeping with the spirit of BYC. Also, the effects of free ranging on egg quality would have been good to see.

Nice photos of some lovely hens. And that tall grass stash was most impressive! ???
Reactions: SuperWhoLockian, sarahconnor, gypsylady32 and 5 others
Good laying is all well and good, but; I have always been of the thought, the more used anything is, the faster it wears out. My ?, can someone tell me if the standard breeds last/live longer producing, than the sexlinks. I would think that a RIR would live/produce longer than an ISA or sexlink.
Reactions: 5penny5, Warwickchickenhill, Raymond Dean White and 5 others
Read more…

Nice article...one more thing taht I found would increase egg production in the winter, especially since the hens spend more time in the hen house is to have very good ventilation
"controlled, low-intensity light can be used to delay sexual maturity until the bird's body is big enough to produce larger eggs."

How would you do that?
I had a egg eater.... I placed 4-5 fake eggs in each laying box and several around the hen house. I have not found any more egg scraps or residue.
I fed my chickens more protein in the winter and they went from1-2 eggs a day to 6-7 a day. One day I got 11 eggs and I only have 13 hens.
Very informative article, thanks for sharing.
Gtourtel ....
I keep 3 hens and have a converted shed for a coop... I have a light on at all times in the shed and I get 2 eggs most of the time and 3 eggs at least twice a week.
Meant to say daily.
Thanks especially for the information about the moulting. I've got a buff orpington (one year old) who layed all winter and stopped while moulting; hasn't layed in two months. I feel a little better after reading your information.
Nice article.
Thank you for the information,I am new to raising chickens so I am looking for all of the information possible.
Great article
Loved it got a lot of useful info
Great Article very informative Thank You...

jenneverett said:
Gtourtel ....
I keep 3 hens and have a converted shed for a coop... I have a light on at all times in the shed and I get 2 eggs most of the time and 3 eggs at least twice a week.
Click to expand...

what breed of chicken?
I am curious as to how much increased light and for how long each day is needed for optimal egg production in winter? A few extra hours each day after dark or all night? Mine free range from noon to 6pm and usually lay in the morning.

Padfoot22 said:
I am curious as to how much increased light and for how long each day is needed for optimal egg production in winter? A few extra hours each day after dark or all night? Mine free range from noon to 6pm and usually lay in the morning.
Click to expand...

You will want to add light in the morning. That way they are waking up to the light and leading into the natural day cycle. Then at night the can slowly get on the roosts as the sun fades and aren’t left on the ground by the sudden darkness. I think 14 hrs a day is the amount of light a day.
I've previously read about placing a light in the coop during winter to help keep up the egg laying rate, tried it and it seemed to work. I later read that this will also decrease the overall length of their productive life and subsequently removed the light.

Whatbtype of protein do you feed them and how much

jenneverett said:
Gtourtel ....
I keep 3 hens and have a converted shed for a coop... I have a light on at all times in the shed and I get 2 eggs most of the time and 3 eggs at least twice a week.
Click to expand...

What tlype of bulb and its intendity. Van you use flouresent, incandecent or leds ?!
Great article, very informative.

More from Lots A Cluckin