Feeding Ducklings Medicated Feed - The Myths and the Truth 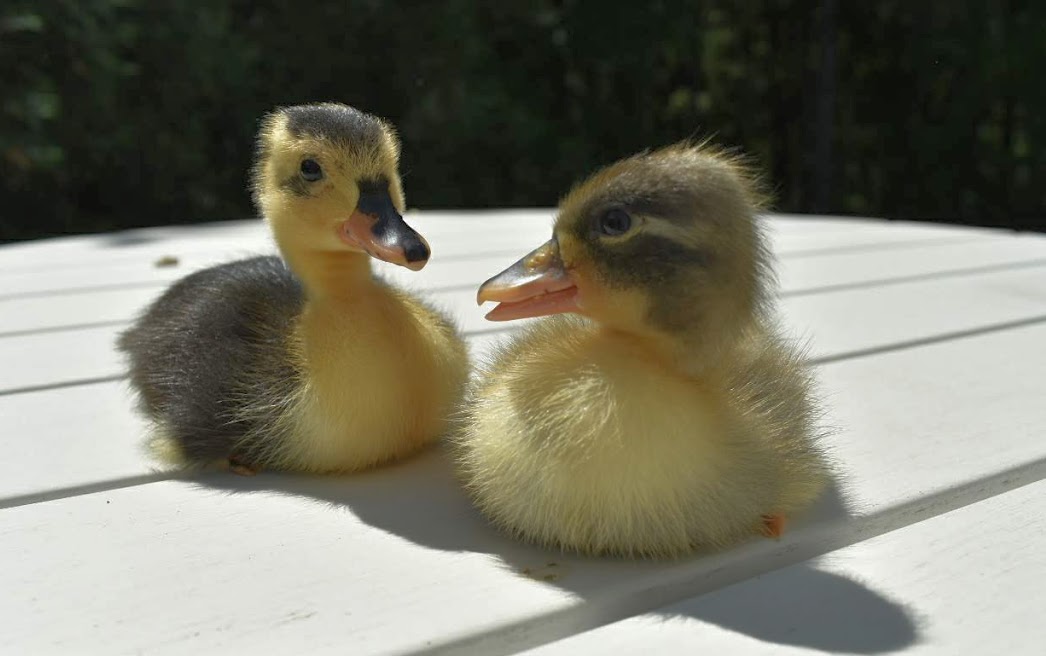 There is a rather pervasive myth about feeding ducklings and ducks floating around out there. You will see it posted on forums, maybe on signs in feed stores, and, unfortunately, perhaps even touted by some older veterinarians that don't really specialize in waterfowl. The myth is simple: medicated feed is harmful to ducks, and if you feed it to them, they will die.

But, there are several things to think about with that statement. Firstly, what medication is being talked about? Just saying medicated feed in general isn't helpful - all kinds of medications are used in feeds. For example, oxytetracycline, bacitracin, amprolium, neomycin, sulfaquinoxaline, and more are all used in medicated feeds. So are all these medications toxic to ducklings?

No, of course not. Some, such as oxytetracycline, are used on them regularly. Oxytetracycline, for example, is used to treat respiratory diseases in ducks and is totally safe for them.

So if someone gives you a blanket statement that "medicated feed is toxic to ducklings", then they are misinformed, or aren't aware of all the different medications used in feed.

To start with, let's talk about the 'medication' found most often in medicated feed: Amprolium. When someone is referring to medicated feed, this is probably the type of feed they mean - feed meant for chicks that has medication in it to help prevent them from getting coccidiosis.

Amprolium is not actually a medication at all - rather it is a thiamine blocker. It works by starving the coccidia of the thiamine they need, thus killing it off. This also means that the birds eating it are getting less thiamine too, but generally it doesn't affect them negatively.

But is it safe for ducklings?

Due to the widespread nature of this myth, a study was performed to see if amprolium and other coccidiostats were harmful to ducklings. The study, which I linked above, found that they were not harmful. "No significant differences in mean body weight, mortality, and anatomical development were observed among the treatments."

In addition to the above study, Dave Holderread, of Holderread's Waterfowl Farm, who is a premier breeder of waterfowl in this country and produces thousands of ducklings a year, and is also the author of Storey's Guide to Raising Ducks, did his own testing. Along with testing for the safety of amprolium, he tested several other medications commonly found in medicated feeds, and these are his results: He found that amprolium, along with chlortetracycline, neomycin, oxytetracycline, sulfaquinoxaline, and zinc bacitrin are all safe for ducklings.

Metzer Farms did some research on the issue too. They are probably the largest hatchery dedicated to just waterfowl in the country. They enlisted the help of veterinarians Dr. Larry McDougal from the University of Georgia, and Dr. Alison Martin of The Livestock Conservancy. Here is link to what they found, but if you don't want to read it all, the conclusion they came to is that amprolium, sulfaquinoxaline, zoalene, and lasolocid, all of which are common coccidiostats found in medicated feed, are all safe for ducklings.

So where did this myth that medicated feed is bad for ducklings come from? Well, some people will tell you that it's bad for them because ducklings eat more than chicks, so they consume more medicine and it kills them. This too is a myth. Sure, a week old duckling eats more than a week old chick - but it is also much bigger than a week old chick, so it's eating the same proportionally as a chick does.

There are some medications used in feed today that are toxic to ducklings, and those are ones that are used to control blackhead and are still arsenic-based, such as roxarsone and nitarsone. However, unless you are buying a feed specifically for turkeys, which you likely wouldn't be when buying feed for ducklings, then you're very unlikely to run into feed medicated with these drugs.

So what's the bottom line?

Medicated feed in general is safe for ducklings. If possible, buy a feed that is not medicated, because they do not need it, but if all you can find is a feed with amprolium or another coccidiostat mentioned above, then it's fine, you can use it. Avoid any feeds that contain medication for blackhead, and if you must use a medicated chick starter make sure you are also supplementing niacin since most chick feeds aren't going to have enough niacin in them for ducklings.
Reactions: Wild-Turkey, Everose, Scrumdidlyump and 15 others

I trust Holderread and Metzger's findings - HOWEVER - there is good reason to be concerned about thiamine deficiency in waterfowl. Ducks and geese require twice as much thiamine as do chickens [1]. Medicated chick feed given as the ONLY food risks thiamine deficiency two ways.
1) unmedicated chick feed and layer pellets have lower levels of thiamine than duck/waterfowl feeds [so low it's not reported on the feed tag, compared to Purina duck thiamine 27.27 mg/lb] feeds.
2) adding a THIAMINE BLOCKER to low-thiamine feed makes it even less available.

Turns out this is a problem even with chickens!
Hens feed an amprolium-medicated layer feed produced eggs with low yolk thiamine levels and resultant high late-incubation embryo mortality and high numbers of weak/dead chicks in the hatching trays [2].

I looked into this because I feed my ducks/geese unmedicated layer pellets. It's no problem because they also eat fish, frogs, worms and some cat food when molting.

very informative--thanks...
Thank you for debunking this myth! Our members need to know this, so we have featured this on our homepage! Congrats!
I'm sure that many back yard poultry keepers get their feed from TSC or FFH. We often get the feed recommended by the store associates. We trust them and buy what they recommend. That can prove to be a mistake. Very few of these employees actually raise birds. It pays to do your own research before obtaining any chicks.

This BYC site has tons of experienced folk who can provide good information.