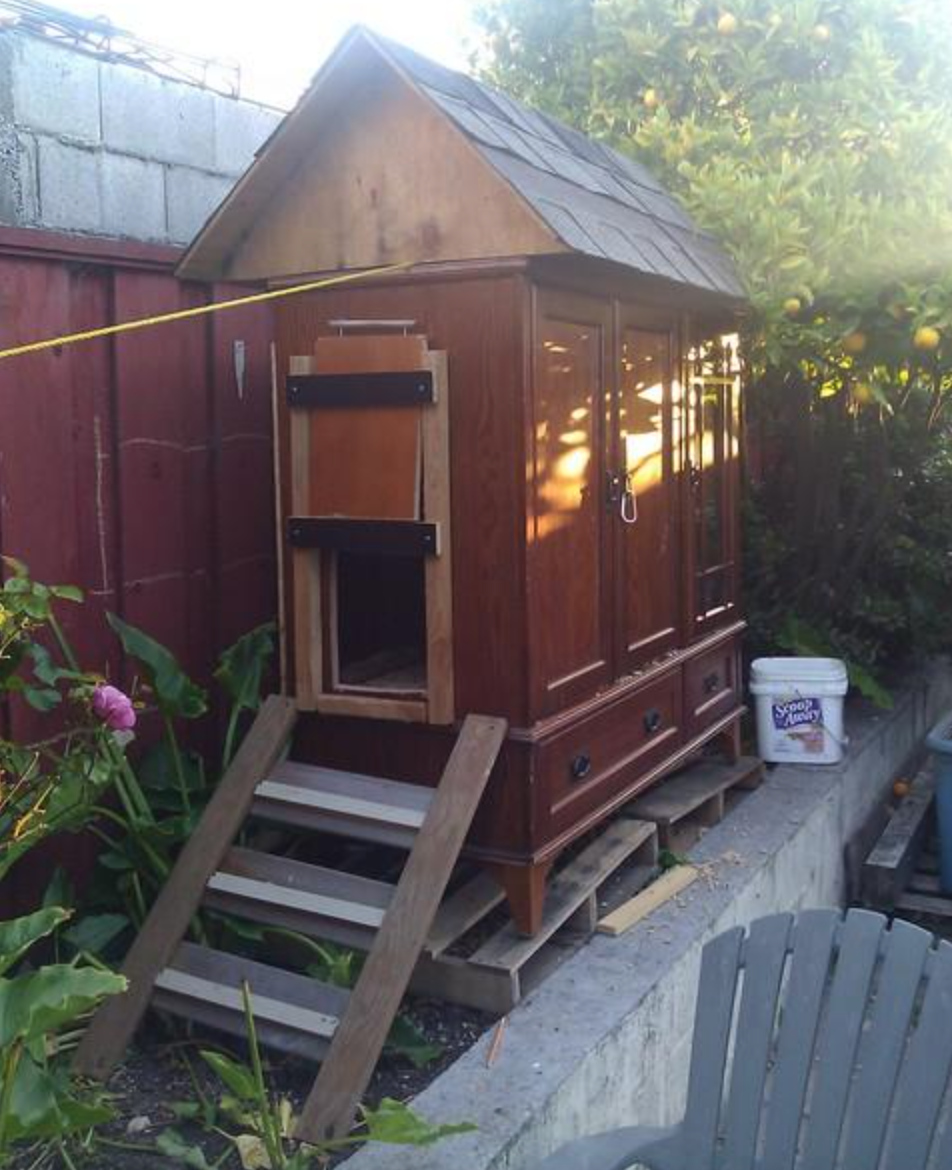 I have been asking and trying to get chickens for at least five years. For my birthday this year my wife decided she was ready for chickens! We got two Ameraucana (Hemingway and Mr.Greene) and one Plymouth Barred Rock (Imelda). After the ladies were a couple weeks old, I got to work on building a coop (later than I should have). I was going to build from the ground up, but then we got the idea to convert an existing "box structure" to a coop. An old hutch/entertainment center seemed to be big enough for us, with existing doors to clean it out and side areas to work as nesting boxes. We looked at Salvation Army and Goodwill and found something that would work well.

I put holes as entry passage (approxiamte 10"x12") to the nesting boxes,

added roosts using brackets made for a clothes closet rack (one about 16" off the ground and the second about 12" above that and 9" forward), Built a little ladder and a sliding door with a bottom lip to prevent others from getting in. Constructed a feeder based and built a roof for it. We placed it on some pallets on top of an existing raised concrete bed. Never thought about this idea. It looks great and inexpensive to build since it was made by using old entertainment. My concerns will be if the coop is just a temporary solution since the material can be damaged by water. I might have use it inside a cage with roof protection...
A good conversion of an entertainment center to a coop.

Awesome. I love reclaimed/creative use projects. Just wondering how it has stood up to the weather though...
It has maintained really well. It has been more than a year and a half and no really issues. The shelving that is a laying box is somewhat warped and spider like to live at the edge of the doors, but beyond those minor things it has worked really well.
Wow! Innovative!!!
That's ingenious! I'm gonna to gut one of my old Magnavox console stereos, and remove the front/side speaker grills and screen them in and make a brooder about six feet long.These consoles have two large sliding lids on the top, and the big cabinet is on casters. With a little bit of hardware cloth, and my brooder is complete minus the necessities. --BB