Article Gallery
Leave a rating
What did I get myself in to?
My chickens came from a Jewish school in a strip mall in Phoenix. A frantic kindergarten teacher had joined a forum I was on asking "what the heck am I going to do when they hatch!?!" I offhandedly said "I've always wanted chickens." 4 weeks later I was in her classroom, still clueless about chickens. I picked out 2 yellow ones and 3 black ones. Even then there was no rhyme or reason, I wanted a variety and I wanted the chicks that were easiest to catch. Despite the fact they were roughly handled by children at a young, young, age, they've done quite well.
My infant flock with Rusty, my heeler mix. This is the day I got them.

Around a week after this, I quickly realized that 1) chicks grow like WEEDS and 2) they could not live in a dog kennel forever....or even for the months I had thought they could! Talk about learning on the fly!
The chicks have continued to grow. This is their life in pictures:


I still am shocked at how quickly these birds grow...

Unfortunately, the photo above was the last one I ever got of 'Drama Queen'. I have no idea what breed she was, but she could scream. My roommate's dog broke her leg, and she is too fussy to splint. I believe in wasting nothing around here - she was promptly given a quick and painless release from a cracked thigh and fed to the dogs. Feathers were composted and the dogs ate the rest!
Now, at 8ish weeks old, the chickens are a riot to be around. I've definitely grown attached to their antics and I'm looking forward to them growing up. 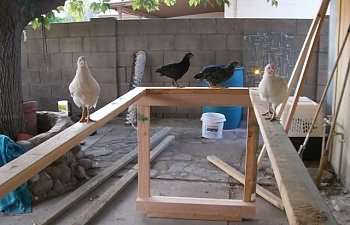 From left to right: Dot, unnamed (for now), Lolita and Foghorn Leghorn 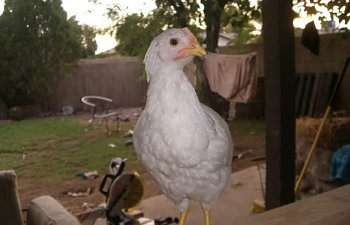 Dot is by far my most adventurous, affectionate hen. Out of 5 random chicks, I luckily ended up with 4 hens and 1 roo. The roo is either going to be consumed by us, or fed to the dogs. He is a riot, but roosters are a no-no in my neck of the woods.
More pictures to come as these girls grow!
​