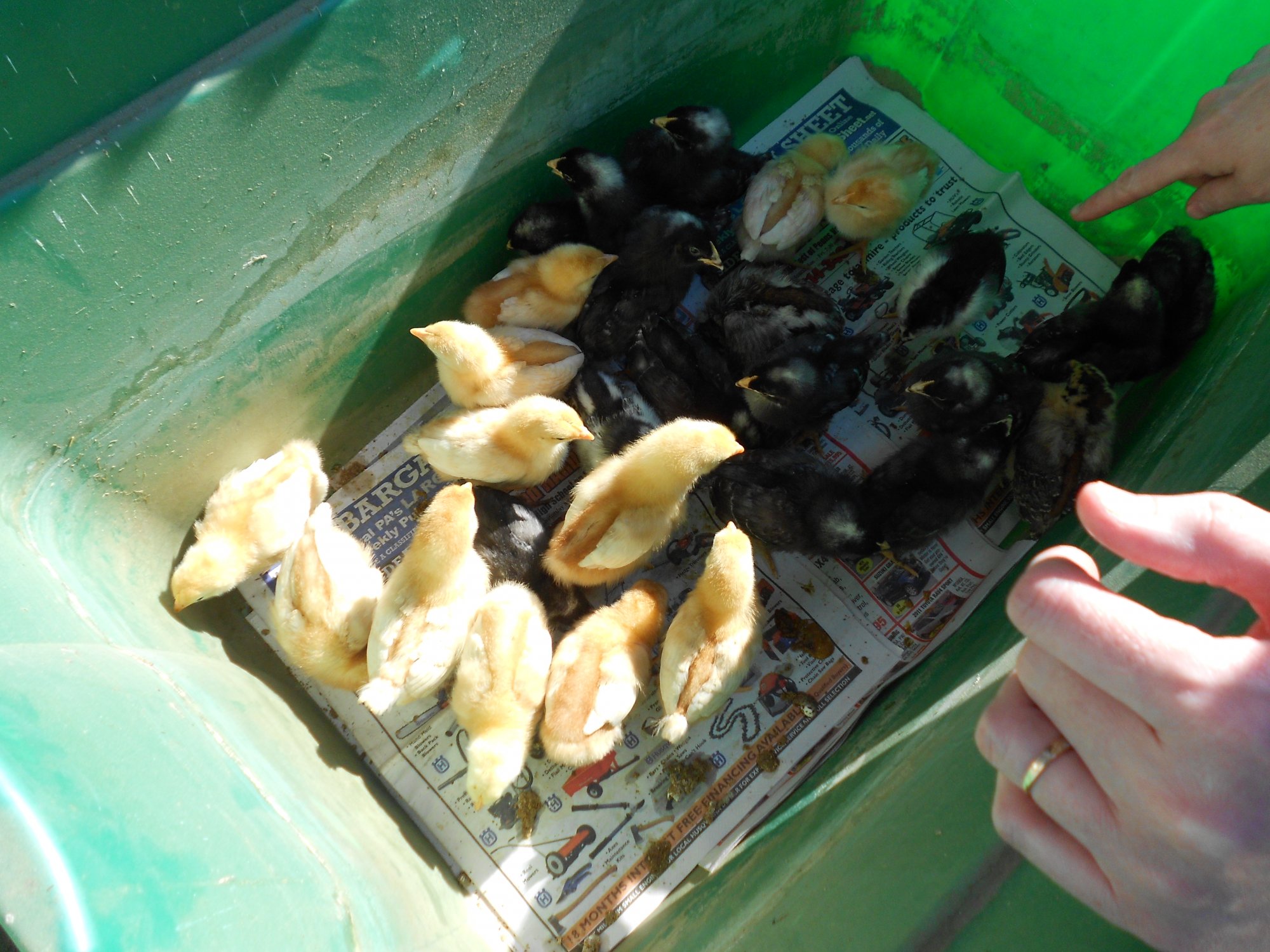 I know there are probably TONS of threads and articles out there about telling chicks apart, but I just figured I'd give you some of my advice! Have fun!
to me the easiest way to tell the difference between the chicks is look at the size difference/ feathers. I'm going to teach you how to tell apart males and females here:

Step 1: If you think you have a rooster on your hands you need to look at details. Does your rooster have any saddle feathers? saddle feathers will be growing at the base of the back just before the tail feathers start. this will be small skinny most of the time shorter feathers that grow off the to the sides of the chicken's back. If you see saddle feathers move on to the next thing. How large is the chicken's comb compared to your other chick's combs at this age? If it is very large and red compared to the other chicks most likely you'll have a fast growing hen or a rooster. The legs and feet of your chick will be a LOT larger than a hen's will typically be.

Step 2: If your chicks that are girls are starting to lay then your (possible) rooster will either start to lay eggs or most likely start to crow. He does this by puffing his neck feathers up and letting out a (at first) very small not so loud crow. As he gets older then it will get to be louder and sound like more of a rooster's crow. There are times when hens crow, but it's very rare. There are also times where hens actually look like roosters. For example I have a silkie hen who looks just like a silkie rooster! I know she's a hen though because she doesn't crow and she lays eggs.

Step 3: Sometimes roosters will be nice and calm, but most of the time they can be aggressive. I guess it really depends on the breed of chicken. I have a Barred Rock rooster who is really nice and I have 3 Partridge Rock roosters who are really kind of "grumpy". I can't give you a list of different breeds that are aggressive and some that are not, but you can watch your little chick to see if he/she is getting aggressive as she/he gets older

Step 4: If you are seeing a lot of hints that your chick is a rooster then you want to be reassured that he actually is a rooster you know? You just don't want to go assuming he's a rooster and then get an egg from the chicken. That would make you feel stupid now wouldn't it? I had the same problem with the Silkies. I assumed that two of them were roosters because they looked like them. One month later.. One looks like a hen now and the other still looks like a rooster, but I saw her lay an egg! Now that just made me feel stupid.

Ask a friend that knows a bit about chickens or look up a picture on a hatchery website of the breed and compare pictures. Another thing you can do that I forgot to mention is when you look at hatchery websites there are sometimes different feathering patterns between hens and roosters with SOME breeds. I'm personally not very good at telling the gender of a chick by feathering, but there are plenty of people on BYC who could help you with that

Step 5 When all else fails go to BYC! post a thread in the "What Breed or Gender is this?" forum section. You'll be surprised how many answers you'll get to what gender your chick is. Sometimes they can tell a hen from a rooster when the chick is only a few weeks old or when the chicken is all grown up! Below is a link to the thread column: https://www.backyardchickens.com/f/15/what-breed-or-gender-is-this
BYC has helped me tons with my chickens. If it weren't for people on here my chickens would be dead by now!

Don't hesitate to post a thread. -and don't be disappointed if you do have a rooster. There are lots of things you can do with a rooster! Or if you have an aggressive one you can either sell him, keep him, or as most people say -Put him in the cooking pot! (personally I don't think I could do that to an animal I've raised, but you know.. that's just me) Have fun deciding what gender your chick is!!
Thanks for reading!
-Chickenlover200

Here are a few pictures of Wings throughout his life... At one point he looked like a girl. then he grew bigger and had a huge red comb compared to the other gals. So I kept watching him grow and I thought. He has to be a rooster. I posted a thread on BYC for 2nd opinions just to make sure I was right, because I didn't want to be calling a hen a rooster until she starts laying. That's just silly

Wings when he was only a few days old: I know Wings is in this tote, but I'm not sure which one he is, because it was too soon to tell if they were all girls. Wings a few weeks ago: about 5 weeks old here: Wings now: He's about 6 or 7 weeks old here You can see how much his comb and wattles reddened just from a few weeks! Like what age males grow pointy saddle feathers.
Pictures would be awesome, showing the things described.
Good descriptions. Pics to back up the words would be helpful.
Pictures for the first part of the article for the differences between pullets and cockerels would make the article better
Read more…

Great article! Do you know anthing about sexing the speckled sussex breed?
hmm I guess if I can tell form combs/wattles since I'm not very good at telling gender form feathering patterns..
Coming soon are pictures of rooster Wings through his life
Excellent info much appreciated.
You must log in or register to reply here.