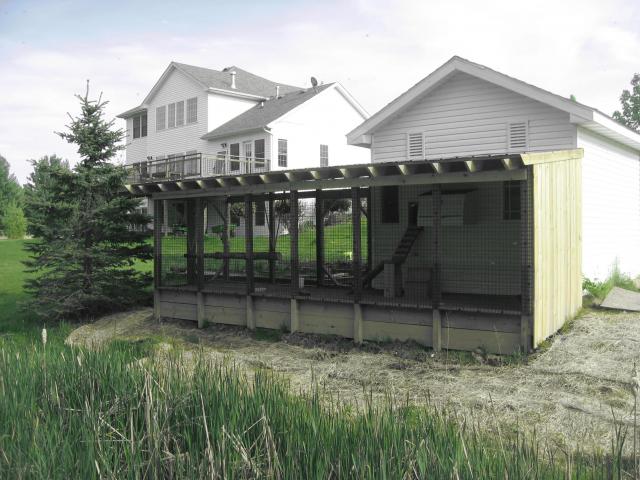 I built a coop in a shed and a run on a hill.

I wanted to 'give back' to this site with a submission that hopefully can help people overcome a problem, or help them learn from where I may have made a mistake. I have learned a lot surfing this site and a lot of the ideas I used I found from researching here.

I was confined to building the coop in the back of a shed. It would have been more fun to build something with a bit of flair but my situation didn't allow it. I thought that building in a structure that was already built would make the project simpler, but in some ways, such as ventilation, etc. it made it more difficult.

I also had to build the run on a slope. Actually it is a waterway that I needed to butt up against. The slope loses 1' every 3'. So, hopefully I did alright solving the issue.

My objectives were to enjoy myself, and do it without breaking the bank. I know that I spent more than I will ever save with free eggs but the only person I needed to satisfy was myself. I also wanted to build the coop and run in such a way that it would be less noticeable to neighbors so I insulated where I could, and used a privacy fence where I thought it would help. My last issue was providing enough space and ventilation for the birds so that I wasn't being abusive.

A side benefit I noticed when building it is that it became somewhat of a family affair. My dad worked with me and my mom and kids pitched in. I didn't realize how cool it would be to work with dad daily like we did in the old days. Anyway... if you have the opportunity; you should maybe involve others in your project, and get some memories you didn't count on.

This is what the space looked like at the beginning of the project. The shelves were removed, and this is what was built. The height of the coop is more than I would like, but I still need to store things under it. The coop is 4' x 8' allowing 4 sq ft / bird. Venting concerned me, and still does, but hopefully I did ok. The shed and coop faces north which isn't what I would choose. I was able to get 12 sq ft of vent out of the coop directly into the shed. The shed has another 10 sq ft of ventilation to the outside. The coop itself has another 4 sq ft of ventilation that I can open directly to the outside air during the summer through windows installed backward into the run. I think that I have enough ventilation for the birds with an average of over 3 sq ft / bird. If I don't have enough ventilation, then it isn't that hard to slap another window in. I put the roost and the poop pans on chains for ease of cleaning. I don't know that the system will work as I would like, or that I will continue to use the poop pans, but this is what I did. The nest is generally copied from this site. The water cups are from Neil Grassbaugh at who is a member at this site. I like the system, and he was very helpful during and after the sale. The run was the big issue. I needed to figure out how to place a run in an area that can be a river a few times a year when it rains a ton. I was sure that I did not want to have a dirt run and be slipping and sliding all of the time on mud and other nasty things. The posts are set into the ground five feet. Frost line here is only 3.5 feet but since it is on an incline I went deeper. I believe that I shoveled 12 tons of pea gravel and river sand into the run. Basically it is now one big sandbox. I also covered the run because of obvious reasons. The wire that I used is 2" 12 gauge gaw wire and 1/2" 16 gauge gaw wire that is coated in black vinyl. I used this product because of longevity, and I think looks good. The run allows 21.5 sq ft / bird.

Here is a picture when I was just getting ready to start. This is what I did. This may give you more of an idea of this issue I was trying to solve. This bridge is 18' long. I built it five years ago just to access the back of the property. The water runs right to the base of it and would flood the run had it not of been raised above grade. The interior of the run has some things that I thought were fun, and hope they work.

A feeder built by my dad. I am sure he cussed me when making it. A nest box that can be accessed from the outside of the coop. The window is installed inside out and sideways so that it would fit in the coop and I can open it from the outside. The outside roost is just a tree I took down last year. The kids like to swing on it. Anyway, sorry for so many pictures. I have read this site and benefited from it over the last six months. I am sure I will figure out many mistakes that I have made, but right now I like it and it was a lot of fun to build!

the article needs more build details
Great job and wow what a chore building that run up above flood stage. I like the tree limb roost.
This looks great. I love your design and how you handled the run. The swing is really cool.
Read more…

I like what you've done. Really like the run!
@Huskeriowa
I know you put this up a long time ago but I wanted to tell you I just found it and love the way your outside enclosed area looks. I'm looking for ideas to enclose a place for winter and this has given me some good ideas. Very nice.
Wonderful idea, get way of using your shed!