I think I have a cockerel. Now what do I do?

Article Gallery (3)
Leave a rating
Around the beginning of summer, people are beginning to discover they have a newly minted cockerel in their flock. Often this comes as a surprise after they were sure they had bought only pullets and suddenly one of them is behaving like a little tyrant. In truth, he’s behaving like a typical adolescent crazed and confused by his raging hormones. He's reacting to suddenly having a harem of his own and he doesn't feel he needs to share them with you. It's going to be your job over the next few weeks to set him straight as to his role with the hens and your role. Boundaries are absolutely necessary. Cockerels are a lot like dogs in this respect. Untrained and undisciplined, they can turn into a danger to you, your family, and visiting friends.

You will need first to examine your fortitude in being able and willing to set these boundaries for him, not showing fear or hesitancy. If you feel ambivalent over committing yourself to discipline him each and every time he shows aggression toward you, you may as well give him away now.

You will need to be firm in restraining him the second he dances up to you to intimidate and challenge you. No, this is not cute, entertaing and harmless behavior. You need to keep him restrained until he submits to your authority. After he relaxes and quits struggling release him and ignore him as long as he's carrying out his normal role with the hens. If he gets upset when you handle the hens, put the hen down and immediately restrain him again.

A good cockerel will get the message in just a few short lessons. If instead, he escalates his aggression, you may as well give him away or use him for soup.

Do you know the difference between discipline and punishment? The first is constructive and won't harm the rooster. The second causes harm, risks serious injury and sets up an adversarial relationship with you and your roo that is anything but constructive. Before I learned about roosters and how to train them, I had a pugnacious Wyandotte roo named Stan. He was always sneaking up on me when my back was turned and attacking me, although I was lucky that his attacks were more like being hit by a fluffy beach ball than a vicious attack with sharp talons. 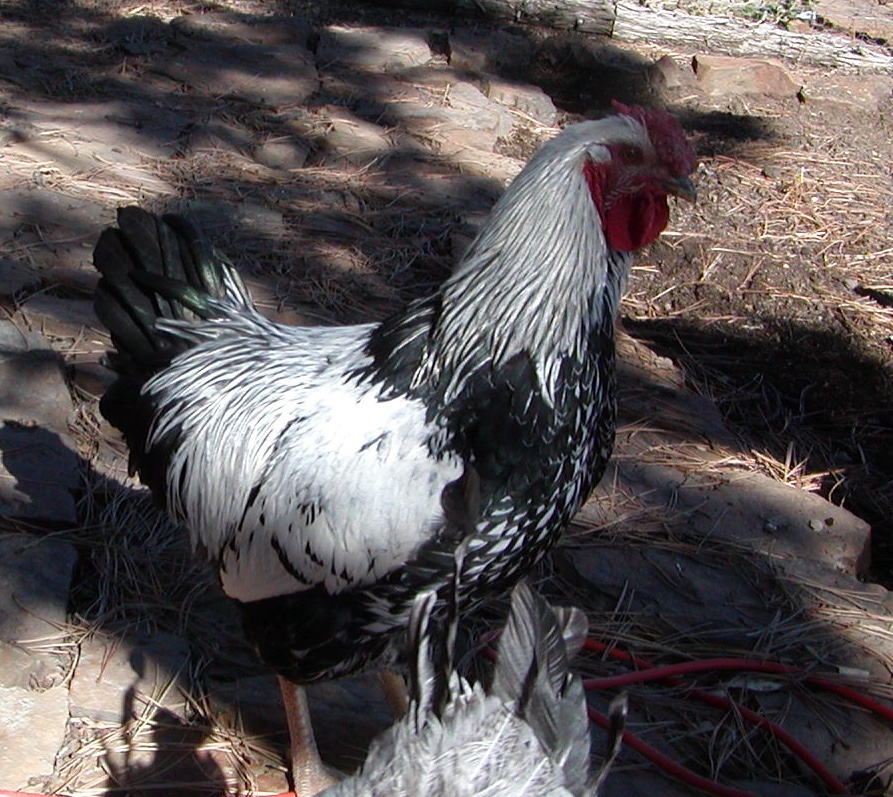 I would wear myself out chasing him and shoving him, not having a single clue how to deal with a rooster. Sadly, Stan died not long after he turn a year old. A few years later, I had two accidental roos out of a batch of chicks that were all supposed to be pullets. Both had serious behavioral issues, one, a Buff Brahma was a vicious biter, the other, a Black Cochin, was neurotic and fearful. 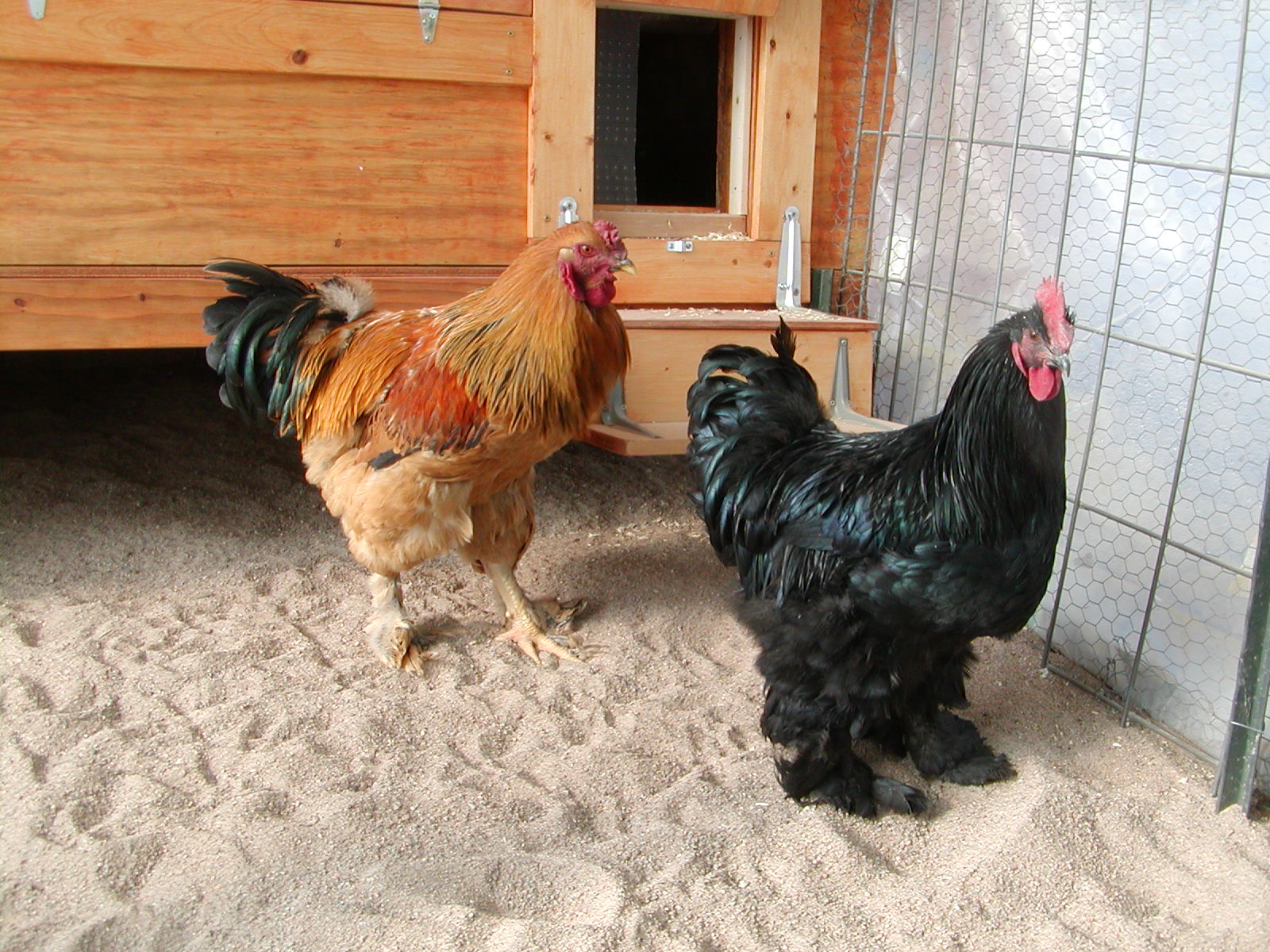 Penrod and Darrel the Buff Brahma and Black Cochin

There was a young man on BYC at that time called olychickenguy, and he took me on as a student of rooster psychology. I learned a tremendous amount from him, and in a year of dedicated training of both myself and the cockerels, both boys were perfectly behaved. Toward humans, that is. They were determined their purpose in life was to kill each other, but that’s another whole story.

No need to "catch" a rooster to train him. All you need to do is be ready with a quick grab when he approaches with his sly little dance. When he makes contact with your leg, quickly reach down with both hands and snatch him up into a football hold or quickly reach down and push him to the ground, pinning him there until he stops struggling. This teaches him that you are the one that controls him and not the other way around.

When my present older rooster, a Cream Legbar, was a very young cockerel around three months, I would grab him up into a firm hold when he misbehaved near me. He hated it. Very quickly he learned that I was to be avoided. Now at age six, he will do anything to give me space. And even better, when his biological son, a Cream Legbar/EE mix, was growing up, he did all the training so I didn't need to. This often happens with boy chicks growing up in a flock with a strong rooster. Both boys are very well behaved and show no aggression to any humans. They both do their jobs with no interference from me and vice versa. 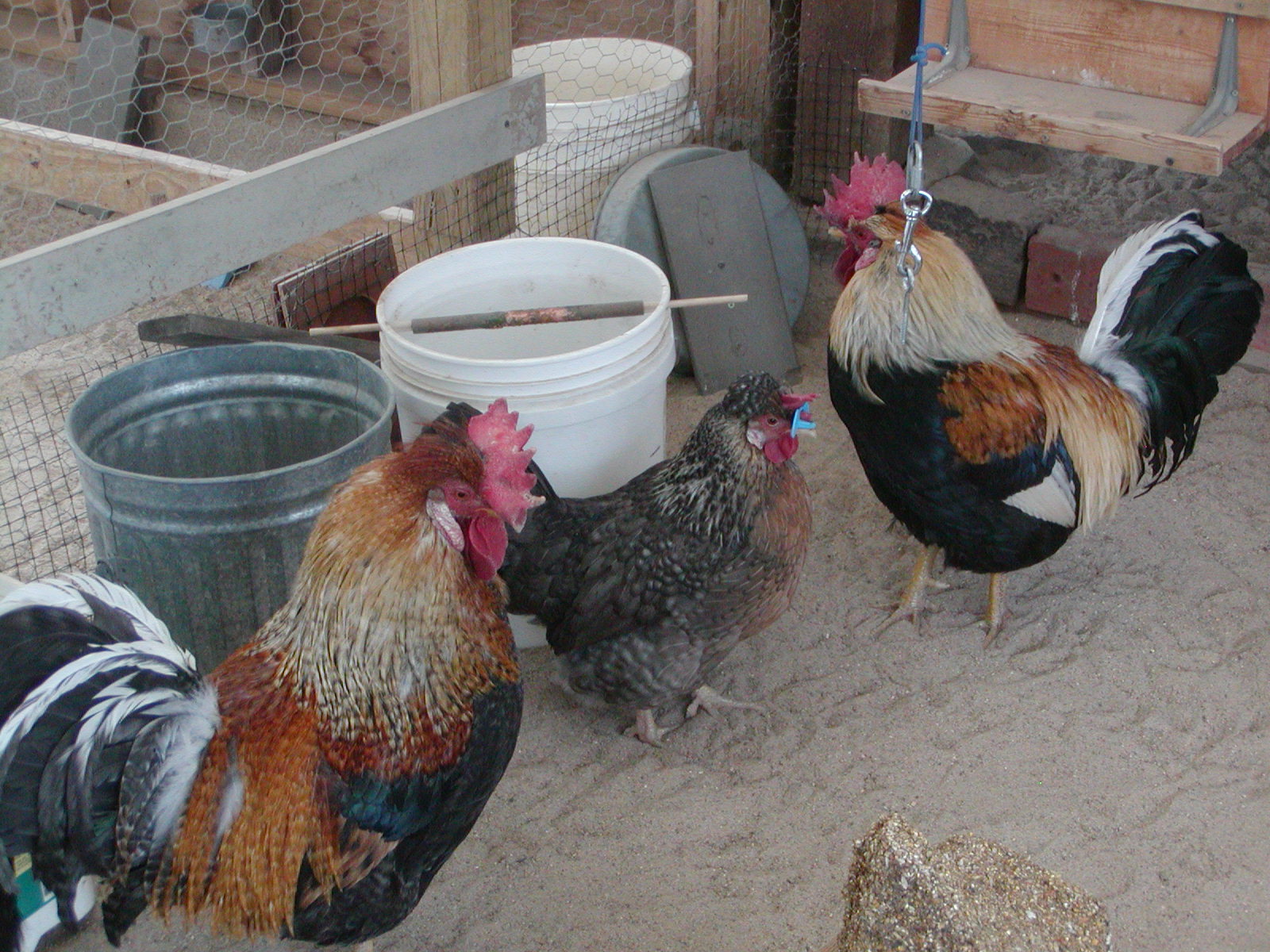 Strawberry the cream Legbar and his son Toots

There are very few simple rules to follow when you discover you are “blessed” with the sudden appearance of a cockerel in your flock displaying his newly minted hormones. At that point, you need to stop cuddling and coddling him. This is because you want to establish clear roles for him and for yourself.

Your role is as flock manager. You bring food, handle the hens to do health inspections, and you provide the janitorial services. His role is to mate the hens and watch over them and protect them from danger. He needs to learn that you are not included in his list of dangers.

To deliver this lesson to him that you pose no danger to the hens, you need to monitor your behavior and be deliberate and calm in your movements among the flock. This may involve additional training of your flock to come to you instead of chasing them in order to handle them. This is simple to do. Using an audible cue such as a clicker or jar of scratch grain or a word, you distribute treats so they associate the cue with the treat. It takes just minutes to train a flock to come running when you want them.

Otherwise, you will ignore your cockerel, showing him you trust him to grow into his role. At the same time, you will immediately discipline him when he shows aggression toward you or if he’s showing undue roughness with a hen. Restrain, wait until he submits, then let him go. A good cockerel will learn quickly. A cockerel with bad genes will not. They make good soup.
Reactions: Coco21, Craig Cowan and Panacake Farms

Hi Azygous! Thank you for this article. I was blessed with a surprise roo and he tries to challenge me daily. One move that has really worked for me is to pretend to sit on him/hold him down and straddle/hover over him when he is being aggressive. I saw a huge improvement after doing this only twice. But I have noticed I need to keep up with it or else he forgets. But I feel like I am making improvements with him.

What is the device on the face of the chicken in the middle?
Good luck with your roo. Sounds like you're making very good progress. Those are pinless peepers to discourage feather picking.
Oh interesting! Like chicken blinders