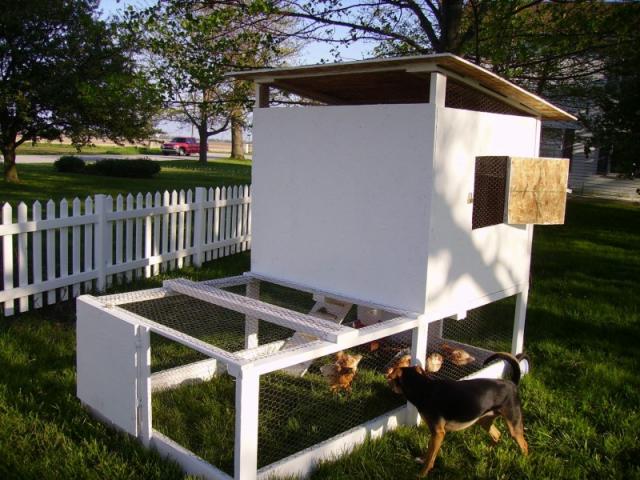 Welcome to my page!
I have 6 ISA Brown Pullets and 2 more on the way.
My obsession with chickens starting innocently. Instead of throwing out the Rural King flier like usual one day I got curious and read it. I saw "Barred Rock Pullets" advertised for .99 a piece. Then I started thinking about how great it would be to have farm fresh eggs. Then, without knowing a single thing about chickens I started doing research and decided I would like two or three of the that Barred Rock breed. I called my husband one day after work and managed to get him to agree. So, I hightailed it over to Rurual King. When I got there I realized there was a 25 chick minimum, and there were no Barred Rocks. "Who the hell would need 25 chicks ?" I thought. I told the sales associate that we were just a small starter farm, and my husband would kill me if I brought home 25 chicks. The salesman would not relent. My daycare provider had mentioned chicks, so I called her and she said she would take some. They had ISA Browns among others that I had never heard of. She did some quick research online, and together we decided to get the ISA Browns. Another customer said she would split the order, so I was suddenly the owner of 6 chicks, and was taking home another 6 for my sitter. The salesman said they were all pullets, because they were light yellow. I had no idea what I even needed to buy for them, so the salesman helped buy a bunch of stuff, including 40 lbs of chick starter, an open metal feed tray, a plastic waterer, and some sort of immunity booster for their water.
I got home with my fuzzy little yellow peepers, and discovered I had no idea where to put them, or how to set up a brooder. I began thinking I had rushed into a complicated mistake. I got on this site for guidance and then quickly set up my dog's old kennel with cardboard, bedding, the food and water trays, and a heat lamp. I then realized I had twelve, adorable little ROOSTERS. The salesman had it backwards. ISA Pullets are brown or buff. So the next day I had to take all the little cuties back and exchange them for pullets.
Stuff about ISA's
I did come to realize that there is not that much info about ISA's on this site. They seem to be a fairly new sex-link. They are a cross of Rhode Island Reds and Whites. They were developed to be commercial, prolific layers of brown eggs. Each hen lays an average of 300 eggs per year. Sex links can be sexed as chicks by color. Two ISA Browns cannot create more ISA Brown chicks. They are known to be hardy and friendly birds.
Here are my little girls on their first day home: Tips:
Over the next few days I learned several things: (1.) The "all natural" bedding I bought was dusty and absorbant, and (2.) chicks fling bedding and food everywhere. So, I needed to put my waterer up on something, because I was having to change it all the time, since the bedding flung into it was mucking it up and absorning a lot of the water. And, I should've gotten the food tray with the bar or something in the middle, because they like to sit in it and fling food all over the cage, and into the water. Now, we have pine shavings (do not get cedar, it is toxic to chicks), and the waterer is propped up on bricks.
Learning as we grow:
Now the chicks are about a month old, (I'm guessing) and they are quickly outgrowing the brooder. One in particular seems to have taken over the flock and she frequently sits (and poops) on top of the waterer and glares down at the rest of them. The chicks are pretty friendly, but a bit squirly. They have hit an awkward phase, with fuzz on their heads and long necks, and cinnamon colored feathers coming out everywhere else. Coop and Run:
My husband is now working feverishly on their coop and run. I started out wanting a light weight tractor for my girls, so I can move them around the yard for fresh grass every few days. We have lots of hawks and other predators that visit our three little acres, so I will not be letting them free range. Now the coop / run is rather heavy, and I'm not sure how portable it will really be. It has a pop up door to enter the run, a ventilation window that will be covered with mesh and a pop up door, two roosts, a ladder to the roosts, and two egg boxes. My sitter is giving us two of her hens, so I'm hoping this will accomodate all 8 at night. I have been told they will fight for the highest roost, so we made two that are almost the same height. They will have access to the run all day and their food and water will be in the covered, shaded area of the run to save on indoor space. I have also read that the hens will likely just need the two nest boxes, because they will use whatever another hen seems to prefer. They seem to be quite territorial huh?
The nest boxes will be easily accessable from the cabinet doors in the back of the coop. We are using cabinet doors and drawers (for the nest boxes) from an old cabinet that we ripped out of our bathroom during a remodel. Some of the lumber, all of the plywood, and all of the shingles for the roof were already laying around our barn. After using as much recycled materials as possible, we are spending about $60 for hinges, padlocks, paint, extra nails and some extra wood. We found some scrap wood really cheap at Menards. The roof will be slanted, and I might try to find a way to collect the rainwater. We're all about recycling. Here are the cabinet doors. I'll be padlocking the top and bottom, to keep out raccoons. We're going to use dried grass clippings for bedding. It's free, and I can add them along with the poop to my compost pile. Good job!
Good idea on the drawers used for nests. Off to a good start with photos and then jump to the finish. Someone got tired of snapping pictures. LOL
Love that cabinet window. Some plans or measurements would be awesome!
Read more…

How do you like the tractor style ? do the hens tear up the grass too much ?