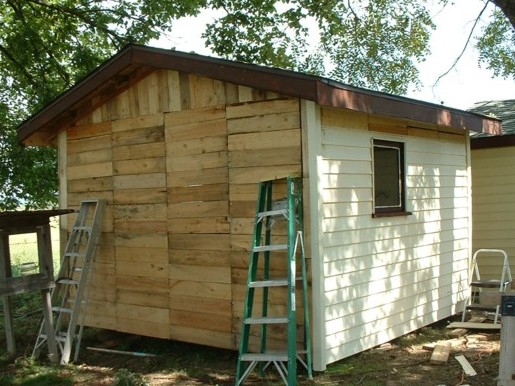 Building a chicken coop from free pallets: By Judy 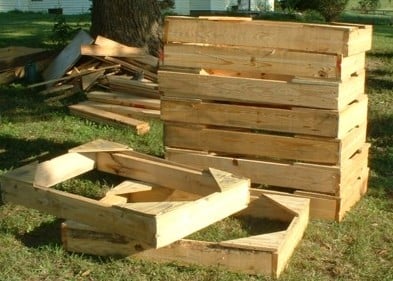 I am fortunate to live near a vinyl siding company, and they stack stacks of pallets outside that are free for the taking. These aren't the same as the pallets one normally sees at feed stores, etc. However, if you are lucky enough to live near a siding company, perhaps they will be giving away their pallets, also. Hubby doesn't care much for chickens, so I decided to build myself a chickenhouse. I took apart approximately 200 of these pallets. The photo above shows the type of pallet. In each pallet is one 2 X 6 that is 45 inches long, one 1 X 6 that is 47 inches long, and 2 end pieces that are 1 X 6 and about 38 inches long. A few of these pallets also have a covering of 1/4 inch plyboard which is 48" by 40".

Since the longest 2 x 6's I had were 45 inches, I had to piece them together to make my floor jousts, wall studs, and the boards around the top of the walls. Youcan see in this photo how I have scabbed the floor joists together. 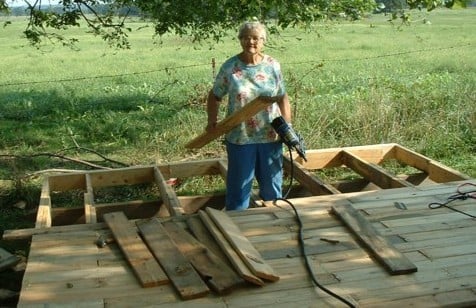 I used the 47" 1x6 boards, which had rounded edges and were very smooth, for the flooring. I set my floor joists so that I didn't have to saw these, just used the lengths as they were. 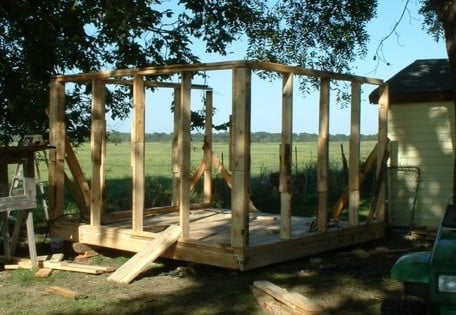 Hubby soon started to feel sorry for me (or probably get embarrassed. LOL) and started helping me lift the walls, and help with the high stuff. You can see that I have scabbed the wall studs together from the 2 x 6's also. Did the same for the boards along the top. 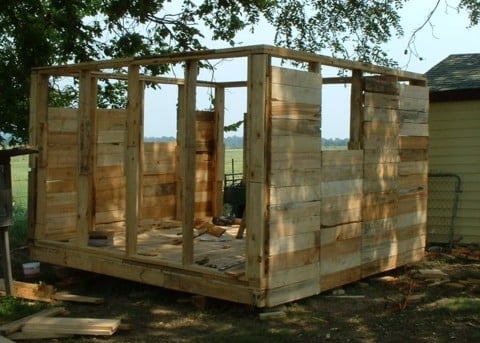 I have started boarding in the walls, with the shorter 1 x 6 end boards from the pallets. Again, instead of using the standard distance between my wall studs, I spaced them so that I didn't have to saw any from these boards. The side with the window in it is facing south.

Picture #8. Getting the walls pretty well filled in.

Picture #9. This is the east end of the building, where the door will be. The finished building you see is a storage building.

Picture #11. Getting ready to put the rafters up. The ridgepole along the top is one of the very few boards I bought. Hubby didn't think a scabbed together one would do for that. However, I did scab the rafters together from the short 2 x 6's. 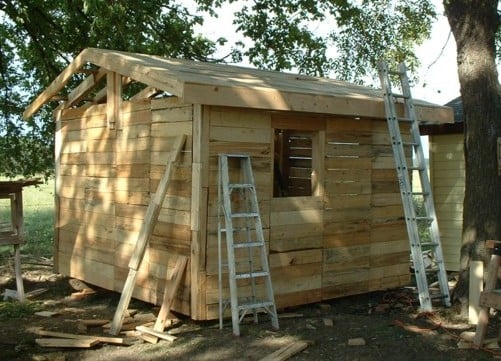 The roof was boarded in with the same smooth 1/x 6 boards that were used on the floor. Again, I spaced the rafters so that i didn't have to saw any off these 47 inch boards. I staggered them so that they didn't all meet at the same rafter, for added strength. You can see one of my bantams watching the progress from the small coop I had them in.

Picture #14. The east end again. We made the door from the plywood that was on some of the pallets.

Picture #15. In this picture you can see the other boards I had to purchase, rather than piecing together. The ones that ran along the ends of the rafters.

Picture #16. We have the roof on. Hubby roofed it, while I handed up shingles. He has worked as a roofer, so I was happy to let him take care of that. You can see leaning against the tree the type plyboard that is on some of the pallets. 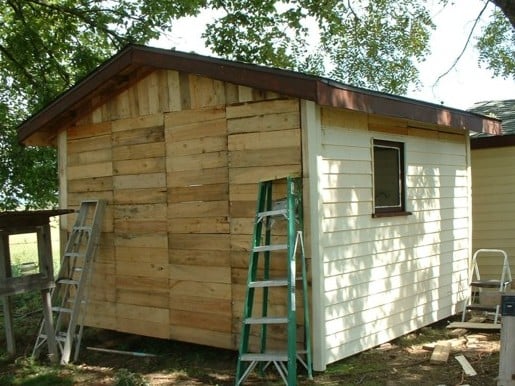 Starting the vinyl siding. We had some left over from when we did the house and outbuildings, but had to buy some to go with it. Hubby said he didn't want it to look junky.? The vinyl, the roofing, the 3 boards I mentioned, and the nails and hinges, etc, were our only expense. We think we saved about $1000 in lumber by using the pallets.

Picture #18. Finished on the outside. East end. 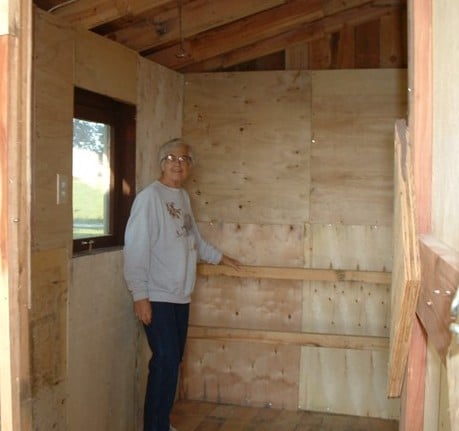 Since I had enough of the plyboards, we paneled the inside with them, and I have just put up the roosts. One thing I would sure do different is I would put both roosts at the same height, instead of staggering them, with the one closest to the wall 3 ft high, and the other one 2 ft. I thought they could hop on the lower one, and the ones who wanted to could use the lower one. But they all insist on sitting on the high one, and the ones that don't fit there sit on top of the nest cover, or the feed barrels.

Picture #27. South side and west end of the finished building.

Picture #29. Laying out my chicken yard. Since I had all the free 2 x 6's, I used them to stabilize the top and bottom of my chicken wire. Then I laid a triple row of them, nailed together and to the bottom 2 x 6, all around the outside edge, to discourage something digging under. 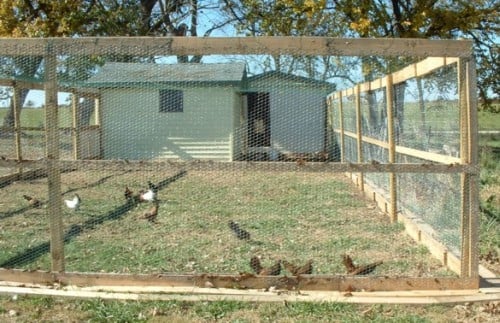 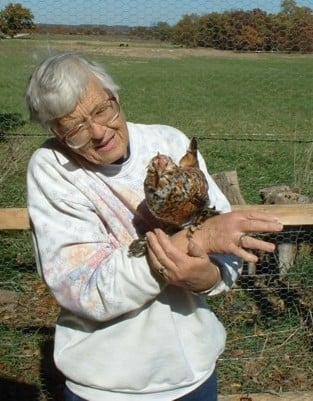 Henny Penny and I.

Now that I have had the setup for 2 years, I don't have many things I would change. The roost, as mentioned before. And I might put larger windows. The pen was covered with deep sea fishing net that I got off e-bay. This was working wonderfully till the ice storm that hit the area a month ago. (Jan. 2007) and ice formed on each strand over 1/2 inch thick. This pulled the netting down, tearing it up, and since I had strung a couple wires under it to keep it from sagging when humidity was high, the wires pulled my posts out of the ground. My pen was destroyed. We have gotten it up again, and this time I have put deer netting over the top. I don't think anything would have worked in the ice, however.
Hubby has worried that perhaps the whole thing will collapse, since all the boards in the walls are nailed to each stud. He thinks I should have purchased some long boards to tie it together better. But I put cross supports inside. From a bottom corner up to the opposite top corner, on each wall, and so far, it has all been very solid. The house is 11 X 12 ft. I put it on 2 runners which are under the floor at about the place I scabbed the floor joists, so it shouldn't sag.
Reactions: gootziecat, Homesteading TwinFlames, Toshia3 and 36 others

This post will help be a ton when I start building my pallet coop in like a month. I have been eye balling pallets right now. I will be getting regular pallets, that are probably 36" or 42" squares. was going to leave them assembled and use 2 accross and 2 high for each wall with will make either a 6 or 7 ft square wall per side, and make the floor the same size. I like the way you built your though. How many hours assembly would you estimate it took? Something that can be built in a weekend if spending both entire days working on it?
I cannot imagine how many hours and days of hard work it took to build this coop. I think it's fantastic! Thanks for sharing it.
Wow! Gutsy and great!
I love your incredible coop, or chicken house . . . or chicken dream villa or whatever they might call it. I just love that you built it with what you had, as well as a whole lot of gumption.
You remind me of a favorite relative, a great aunt I got to visit as a child, who was the first person to introduce me to chickens. I'll be thinking of your tenacity when I try to get through my own coop building experience soon. Thanks for the inspiration! Ellen
I love this coop! I am planning on building a pallet coop in the fall

Thanks for the inspiration!
I have to show this to my dad he thinks you cant make a good coop out of pallets, thanks
This coop is amazing! We're going to expand our coop with pallets this fall, or at least that's the plan (my boyfriend thinks we can expand it, I think we're going to have to scratch it and salvage the materials to start from scratch). At any rate, I think it would've looked nifty if you'd skipped the siding. But that's because I just love natural wood.
great use of pallets! We used them for one of our coops too! cant beat the price if your willin to work! u can be very proud!
This is so awsome! You're my new hero!
You Ma'am are an inspiration. Beautiful coop.
i think you did a great job. Simply awesome and hubby also.... have fun
Amazing coop - you made me tear up though. lol Those chickies are very blessed to have such a wonderful 'skinparent'. EXCELLENT coop and wonderful ideas on your part.
I hope I'm just like you when I'm your age! This is amazing! I love independent do-it yourself women!!
Wow! You are wonderful Judy! Way to go! Keep it up!
I don't mean this as an insult but you are an inspiration to folks of ANY age. You go girl!
YGG! I wish I could find these pallets around here.
Have pallets, thought I needed help, but guess what I really need is to begin. Thank-you for inspiring me to just get out there and get it done!!
My pallet projects have failed before I really get started. There are so many nails and the nails seem stronger than the wood. I can't get the nails out without splitting the wood. Is there a trick or a tool for that? A friend suggested a sawsall and cut the nails. That left no place for new nails.
A lot of pallets are nailed with twisted shank nails for holding power. I suggest a hammer and flat 'wunderbar' or pry bar to get the joints seperated. Then one can clip the nails with bolt cutters, or a reciprocating (saber) saw. If made of Oak, predrill your new nail holes with a slightly smaller drill than the nail thickness.
I really liked the idea of spacing the studs, joists and rafters to the most common board length.