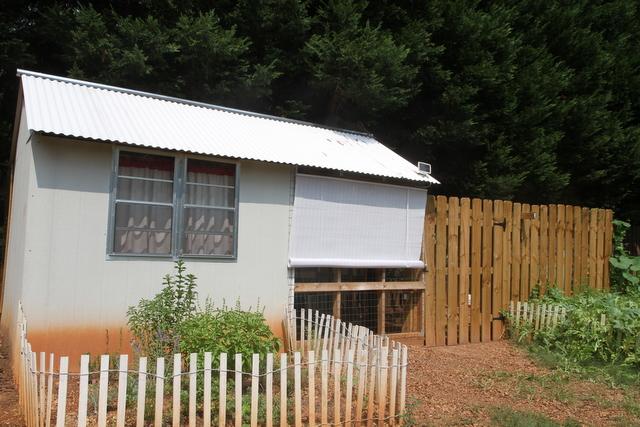 Chickendales
Here is Chickendales. It is home to our 3 barred rocks (Cinderella, Jasmine, Tweety), 2 Golden Comets (Peep and Omelet), and our RIR (Minnie). They only get to free range when I am out there with them. Even though we have a 6' fence around our backyard to keep out some predators... the Hawks ignore it!
As you can see, our garden is growing up the fence. I planted things right by their coop so they would have fresh plants and stuff to grab at will as it grew through their coop. They LOVED that! Inside area is 8x8. It has 4 nesting boxes (but they only use the one to the right). They have almost 8 foot roost above their nesting boxes (and of course, they fight over the spot by the window). This works great! Very easy to clean. There is a solar light in there so I can check on my girls before I go to bed. There is a waterer and a feeder with grit and oyster shell in it. They also have 2 windows with pink curtains and a thermometer. They also have a storm door with a window I can open to let cool air in during the summer. There is also a plywood "shelf" at the top. I store extra feeders/waterers and trash bags up there. This is the screened in porch area. It is 6x8 and completely covered. I has a screened door. It also has a blind over one side (you can see it in the complete shot above) to block out the hot sun in the summer. There is a waterer on a shelf (to keep bedding out of it) and a feeder in this area. There is also seed treat feeders in there which they enjoy. This is their 12 x 10 outdoor run. It is covered with wire to keep predators out. There are 2 waterers in the run. It's hot in Georgia! They also have an apple tree in there for shade. There are roosts and things to play on in here as well. The little green coop at the end was their baby coop and now is the coop where my little ones are staying until they are big enough to join the big girls! My girls love to take dirt baths under the apple tree! This coop and run cost more than we expected. It ran around $500.
Things I still need to do:

Things I would have done differently: