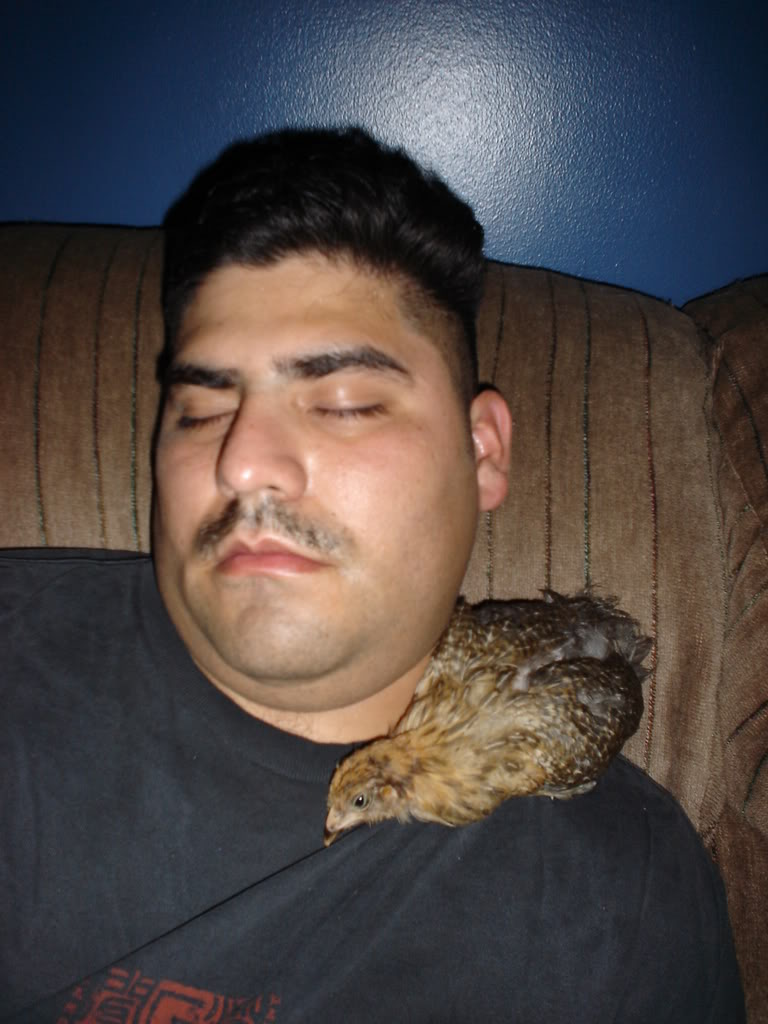 Hi everyone! I'm new to the chicken keeping world. So far I only have one, but I am looking to get her a couple of friends ASAP. I live in Savannah Georgia with my husband, 1 dog (chow/golden mix), 2 cats, 1 parakeet, 2 chinchillas, 1 hedgehog, a bunch of fish, and 1 Easter Egger (for now...).
So our current chicken's name is PUCA. I know it seems like a strange name, but my husband and I have military histories and PUCA is an army acronym. Long story. Anyway, I work at a very small zoo/education center and one day a man came in with a bird in a box that he found being cornered in his back yard by a cat (the bird was being cornered, not the box....). He chased the cat off and thought the bird looked like a hawk, so he gathered it up in a box and brought it to us to see if we could help it. I gave him the numbers of some local rehabbers for him to call, but I wanted to see this bird before he left. So he took me down to his truck, took the box out, lifted off the blanket on top and there was this little chicken. I told him right away that it was a chicken and he just about fell over with surprise and embarrasment! He said he thought it looked like a chicken, but was convinced it was really a hawk because of the color and the way the beak curved, but I picked her up and showed him the feet. He didn't know what to do with it at that point, and I doubt that wildlife rehabbers would take on domestic birds, so I volunteered to take her home. It was obvious right away that she had been someone's pet, she came right up to my hand, and one of her wings was clipped. She was so sweet, I couldn't turn her away.
I've wanted to keep chickens for years now, and my husband and I had been talking about it seriously for a year, we just had never done it. So, someone felt we had talked long enough about it and we needed to do it! months ago when I was researching keeping chickens, I stumbled across this website and bookmarked it, and boy was I glad I did! As soon as I got home, I took a bunch of pix of her and posted them on the forum here asking for anyone's help to figure out what she was and how old. According to everyone, she was an Easter egger and probably about 8-10 weeks old at the time. Most people also felt sure she was probably a female. I was surprised to get 5 responses in 10 minutes! I discovered that the people on this website are very kind and helpful, and I thank everyone for making me feel so welcome!
Here's my hubbie and PUCA sleeping together on the couch. Everyone now: Awwwwww! 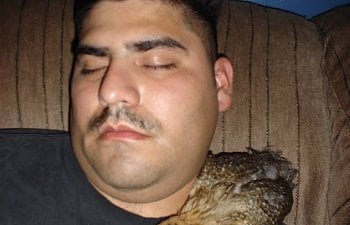