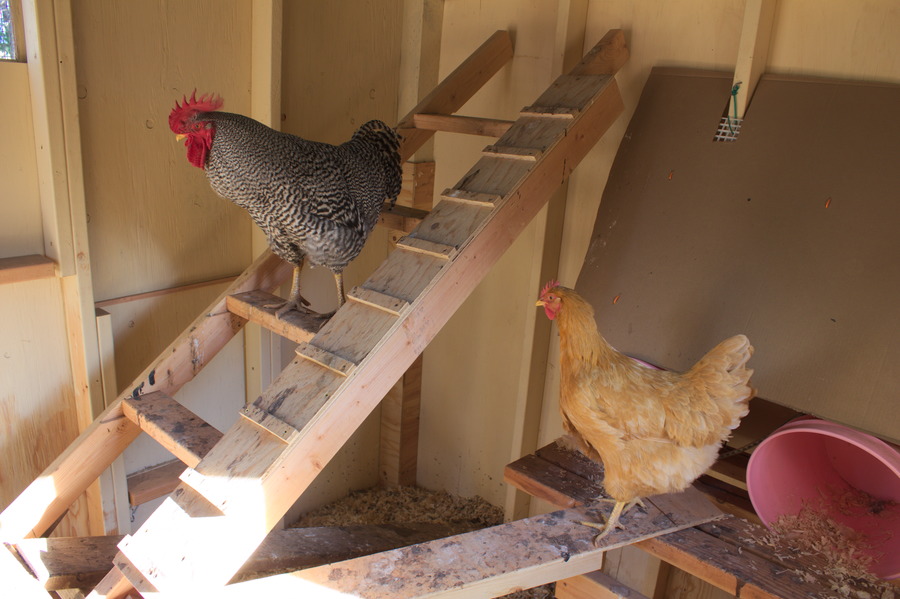 We retired only a few years ago, in 2015. Leon worked at Boeing Aerospace as an NC programmer. He had been born near Charlottesville VA in a rural area and wanted to return to rural living. I wanted to leave the cities and live a quiet life in the country to do my crafts, cooking, herbalism and astronomy, a science we both loved. We bought 10 acres on a dirt road near Goldendale WA. Leon and I had been happily married for 40 plus years. When we moved to our property (10 acres) there was a raised platform that the previous owner had built for his brother's RV. He had wanted to tear it down but we told him not to Bother. At first, we didn't really know what we wanted to do with it. It was a very natural conclusion to build our chicken coop on the platform and Leon did it that first year. He was an excellent NC programmer but his wood working was always very basic and functional and rather handsome for being so simple. He just framed the coop and used good wood throughout. The roof was already there. Simple plastic sheeting. I do not have any drawn plans, I am sorry- it is just a large wooden box. He made the nesting stand and perches, himself. The nests are just buckets turned on their sides and secured with parachute cord and bungees. I don't think he ever drew plans. It was all in his imagination.
We bought our chicks in the spring and raised them ourselves.
It should last for years. This month, I replaced the original linoleum flooring (already decayed and falling apart) with rubber mats (expensive, but it seemed worth the money. It was also an affirmation that I was keeping our flock!) and had a handrail added. I am not as steady on my feet as he was. It isn't anything very fancy but it works well and has lots of room for our four hens. We had a rooster for while (Bernard) but he started attacking us when our backs were turned and finally met with a tragic accident, if you take my meaning! The girls are fine: one Barred Plymouth Rock (Bernice) Two Orpingtons (Amber and Blondie) and a Bantam, Ariel.
Leon died recently of cancer.. .it was very sudden and we didn't have a clue he was sick even last October. He had been losing weight last summer but we believed that was because of all the excercise he was getting cutting down dead trees.
It was Pancreatic Cancer and had spread to his liver. He died January 7th. 2020.
He thought I would want to give the chickens away but I have decided to learn how care for them. I had helped him with his 'chicken project' and now they are mine. The great bit of humor in all this, is, I thought I was afraid of birds. (seeing the movie 'the Birds' at far too young an age!) Now I entirely love my little feathered family.
If you want the technical details I will supply what I can. He also used PCV piping for the feeders. He decided not to heat the coop for fear of fire and he believed it was better for the Chickens if they adjusted to the seasonal changes. He chose a rubber watering bowl after trouble with freezing.
About author

Kathymary
69 yrs old. Retired. I inherited the Chicken coop and flock from my beloved husband, who died recently, of cancer. He thought I would give them away, but I didn't want to do so. I am new but I'll learn. He was very successful these first few years and had built the coop, himself, with my help, of course.