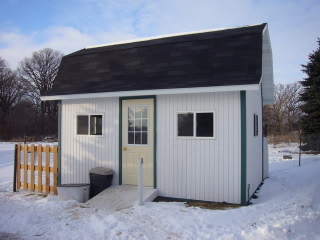 Here are some pics of my Minnesota coop. I started out in an old tool shed, but decided to upgrade to a custom built coop with all the features I came to want after 2 years in the old coop.
It's fully insulated, floor, walls, and ceiling. It's 16' x 10'.
It has a solid linolium floor with 2 drains set in the floor on either end for easy cleaning.
It has 3 interior rooms and a small area for feed. Two large rooms on either end with 1 small room straight ahead as you walk in the door. Pic's of the interior are below.
It's rigged with electricity; 7 indoor outlets and 1 outdoor outlet for a water heater base and motion detector light. It also has built in squirrel fans on either end and in the winter I hang electric milkhouse heaters. Even without the fans or heaters it stays about 5-10 degrees cooler in the summer and 10-20 degrees warmer in the winter. Insulation is great!
Front: 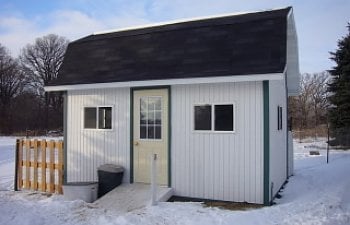 It still needs the green trim put up around the windows. 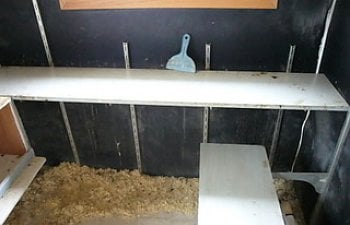 They have adjustable/removable melamine roosts. The black on the walls is 1/8" sheet plastic, caulked along all seams. I use the blue scraper in the pic to clean the roosts along with a spray bottle of bleach water.

Interior, right inside the front door: 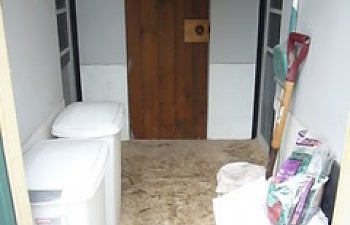 The feed is in the bins on the left, oystershell and grit on the right.

In the top right of the pic you can see the heater suspended from the ceiling: 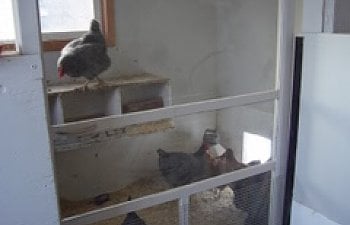 Here Apollo and Penelope are demonstrating the nest boxes/roost: 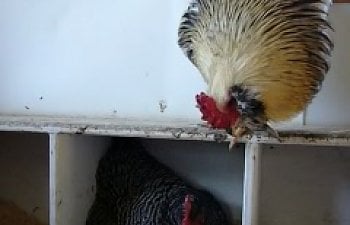 The board along the bottom is very handy in keeping them from shoving all the bedding out of the nest.

Here is the view from standing in one room looking over to the other. The small room is behind the solid door on the right. 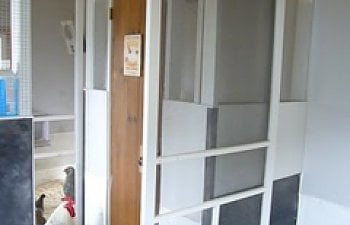 The doors are screen doors set on slider tracks, so they don't take up a lot of room and get out of the way when I have the wheelbarrow in there to clean. They also don't displace alot of bedding when I open them. The rooster in the pic is roaming around the area where I keep the food. 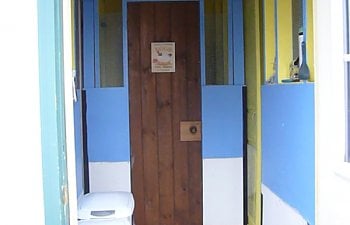 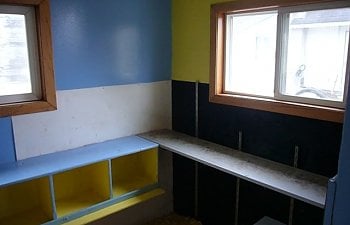 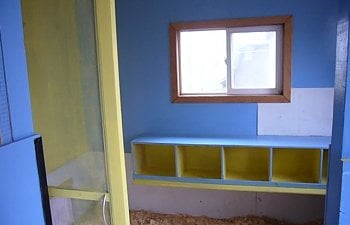 I also added these vinyl door flaps to keep out drafts since their door is open to the pen 24/7. 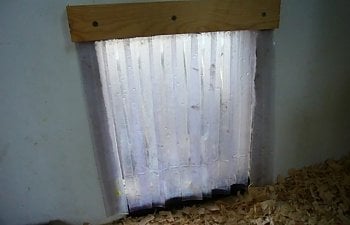 And this is my new handy dandy oyster shell container 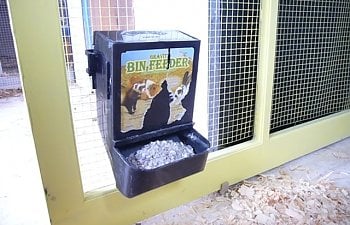 Off the back of the coop there are three seperate aviary-type rooms with three attached yards: 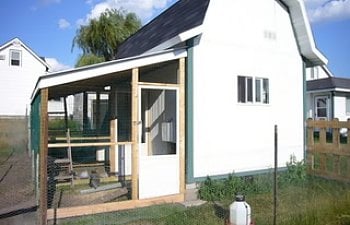 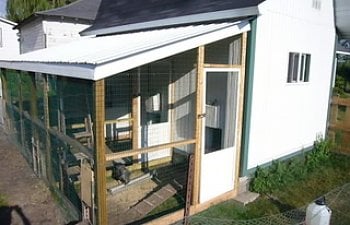 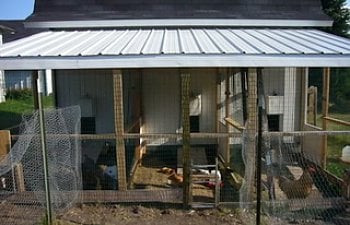 It's (hopefully) fully predator secure. Totally enclosed with plastic coated heavy gauge wire including 12'' buried into the ground. Complete with a floor of pea gravel, easy to hose out and clean! The entire enclosure is custom made including the doors and latches. In the pics it's under construction so it's sort of a mess.
Here is the chicken door that leads from the aviary into the yard: 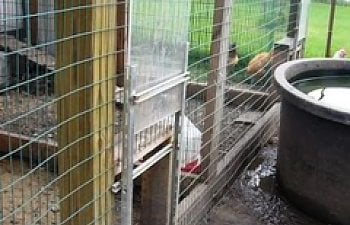 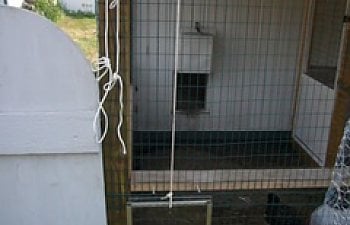 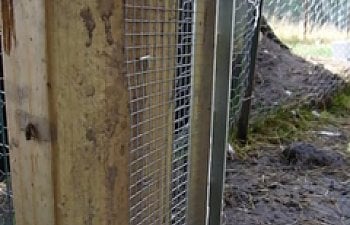 It's a piece of 1/2" plexiglass lifted by a rope and pulley from outside the yard (very handy because my sweet rooster keeps attacking his babysitter when I'm out of town). The track it sits in is recycled from the melamine roost supports. In the last photo you can see the hardware cloth I added to seal up the 1'' opening between the frame of the yard and the door frame. One inch is enough for a weasel or rat to sqeeze through and I'm not taking any chances!

The complicated system of ropes and pulleys (not really that complicated 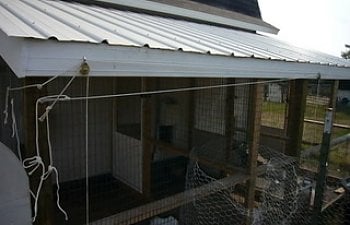 Interior of one of the yards, with pea gravel added: 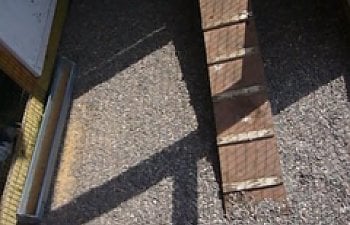 Finally got the rest of the pea gravel into the yards! It was about 1 ton of gravel that I moved BY HAND (yay for me) cost was about $26.
The yards are great, because 1.) I don't like getting up early to let the chickens and ducks out so with the yard they can go out and be safe from predators as early as they like. 2.) It's shade and shelter from hail, snow, etc... it keeps the water cooler and helps prevent alge in the waterer. 3.) It keeps the room that the ducks and chickens share MUCH cleaner because the ducks will dump about 3'' of water on the floor of the coop if the waterer is in there. 4.) In the spring and muddy season I can keep the chickens in and prevent them from destroying all the grass in their run.

Here is the latch for the big doors to the aviary: 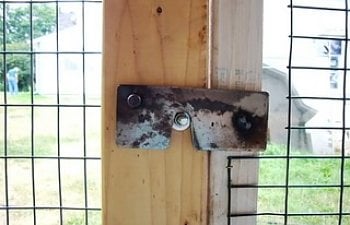 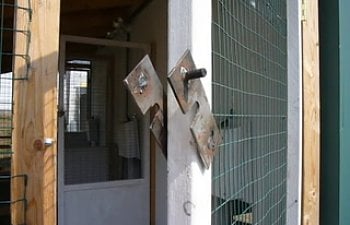 It swings up to open and down over the bolt to latch. I don't trust it to be 100% raccoon proof, but the raccoons in our area are not a problem currently, they don't get into the garbage etc. So with these doors and Critter Ridder which is a smelly deterent I'm ok with them.

Here the ducks are enjoying their tub. I swear that water was CLEAN yesterday lol! 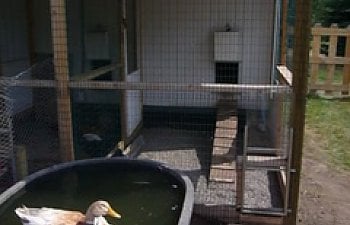 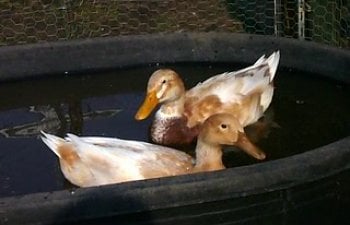 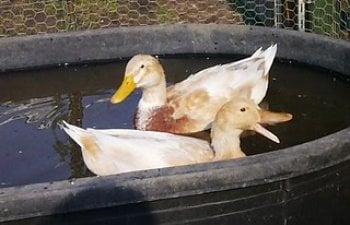 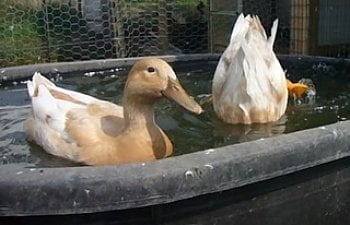 They love their new tank so much they didn't want to come in the first night I installed it! They hang out in and around it all day, spashing, playing and napping in it.

Finally here are some random pic's so you can get a feel for what it looks like, again Leif is roaming where I keep the food: 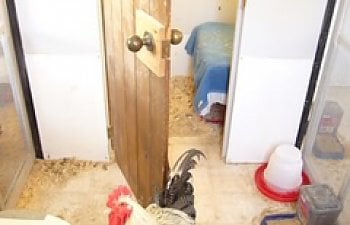 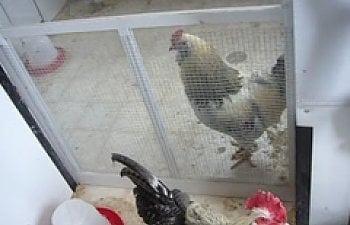 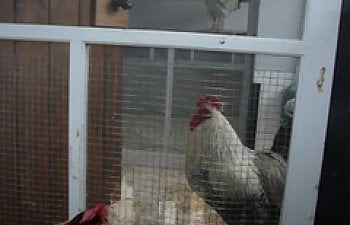 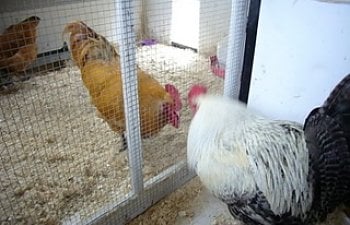 I had to put hardware cloth over the screen door because they destroyed the screen while fighting.
Reactions: Bigbluefrog and Peacehaven

Very nice coop. How much ventilation does it have?
Very nice!
Nice coop and duck house. Spacious and secure. Just get some critter proof latches!
Read more…

Nice coop! I like your idea for the plastic flaps to keep the drafts out. (We're in Mn, too) Did you have to do anything special to get the chickens used to the flaps? Also like your idea for the covered yards; especially smart for our winters! Thanks so much for sharing!
This is awesome !!!!
I can't see the images?? Are they gone?
Looks like a nice set up!
Are there plans and material lists anywhere?