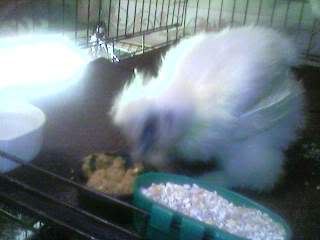 Update again: Bought some property, almost 20 acres, and moved to Missouri. Trying to get a cabin built and get back into chickens. SO far right now I have 5, but hoping to get some more chicks soon!

Hi everybody!
Wow! Been a while since I updated this!
Let's see: I did get chicks, and ducks. After about 5 months, my neighbors dog massacred them in two raids. I had one survivor who was brain damaged and ran in circles but was other wise fine. I bottle raised the two baby goats and my boss gave them to me. Then hubby got a new job in Arkansas, so I had to find homes for them. Moved to AR and was there a year and darling Hubby decided to take off and go live in Indy with a bimbo he met online. Since then, I have had a very difficult year or so, including getting laid off 3 times. But I have met a wonderful man who is helping me get my life back on track. We are building a life together with our horses, dogs, wolves and yes, of course, chickens!
2008-02-13
11:23:00

My name is Suzi and I work at a riding stable where there are a bunch of chickens running around. This past year, my boss decided he wants to raise chickens so he can sell eggs, so we have more. (guess who got elected to take care of them?) He's also picked up some of the fancy types just for the heck of it.
Then there was this White Silkie that had something wrong with it.........in the process of trying to figure out what to do to help her, I found this place and so it begins....
Chickie Bird 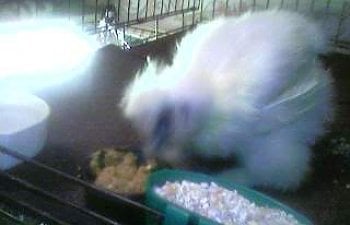 The beast that started it all
I am now planning to get several chickens and maybe a couple of ducks and geese of my own. And keeping the poor brain damaged Silkie as well. 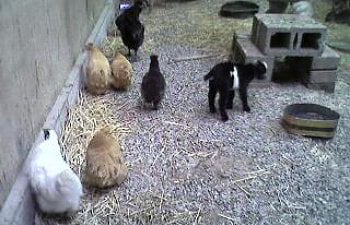 Peewee with her buddies Peewee and Boots (Booboo)
the bantys & silkies Lunch time at the office11:22:30
I'll add more to this later. Been feeding goats every few hours for over a week now. I am sleep-deprived!