Mountain Lions - Chicken Predators - How To Protect Your Chickens 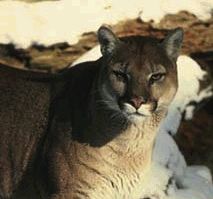 ​
Mountain lions (Felis concolor), are the second largest native North American cat (the jaguar is slightly larger). They are known by a number of different names - cougar, panther, painter, catamount, and puma. Mountain lions are mainly nocturnal, preferring to hunt at night. They have no predators, and they feed on coyotes, deer, fox, frogs and toads, insects, lizards, rodents, opossums, rabbits, livestock, poultry, raccoons, voles, beaver, porcupines, skunks and other small mammals, birds, and even fish. They are very fast animals over a short distance, but cannot run great distances, due to relatively small lung capacity. They are also agile tree climbers.

An adult mountain lion may be either a gray color or a reddish or yellowish color called tawny. Adults have no spots, and the tip of their tail is black. A full grown animal may reach 4 to 5 feet in length, not counting the heavy tail, which is 2 to 3 feet long. Males are generally larger than females, averaging 130 to 150 pounds in weight. Females average 65 to 90 pounds. Pads on the forefeet are larger than those on the hind feet. Heel pads on both the fore and hind feet have a distinctive three-lobe appearance. Claw marks seldom show in the tracks of this species.

The mountain lion had one of the most extensive distribution of all American terrestrial mammals. It ranged from coast to coast in North America, and from southern Argentina to northern British Columbia. Hunting pressure and other environmental changes have restricted their range to relatively mountainous, unpopulated areas throughout much of their range. However, in recent years populations have begun to expand into suburban areas, especially in the western United States.

Mountain lions are ambush predators that require cover to stalk their prey. They are also opportunistic hunters and will take advantage of any hunting opportunity, such as unprotected livestock. Larger animals are usually killed by a bite to the back of the neck. Lions usually remove the viscera and eat the heart, liver, and lungs first. Uneaten portions of prey items are often cached (covered with vegetation, dirt, snow, or other debris). These food sources are generally fed upon until consumed or they spoil. Lions generally move the carcass and re-cover it after each feeding.

Mountain lions are uncommon chicken predators and you are unlikely to have a problem with these unless you live in a rural setting, but there are always exceptions. Keep your flock safe by housing them in a secure coop and run. Double check that any wire mesh on your coop is securely attached and that there are no weak spots. Mountain lions can jump very high and far and are good climbers, so make sure the roof of the coop is secure and any fences are tall and secure. A very good method of securing your coop and run is by covering windows and the lower part of the run's fence with 1/2" or 1/4" hardware cloth. Do not use chicken wire for your coop and run, it is not a barrier for a determined predator.Use welded wire or hardware cloth instead.

The article talked a lot about mountain lions. (Very good job). Maybe you should include how to better protect your chickens from them. Great job over all!!!
Nice easy read on mountain lions with good info.
Make sure to read the other predator articles in the series
Read more…

Again great info!! Luckily, we havent had any problems with mtn lions... yet!