My name is Justine, and I just began my small flock of six on August 1st 2011! We started out with four.. added one.. added another one.. lost one.. added six more.. rehomed two.. added three.. added one more and than just lost our dear Carl on November 7th 2011. He was found dead in the coop

We lost two of our original four to some type of genetic disease (failure to thrive, or something..)
Oh and as of 11/8/11 we added another two silkie pullets to our group of 12. They came from the same breeder Steve (our roo) came from. I'll have to add pictures of them soon!
Update: 11-19-2011 Wow.. I think I have a chicken problem.. We are up to 18 chickens and 2 ducks. :|
Anyway.. Hope you enjoy my page! 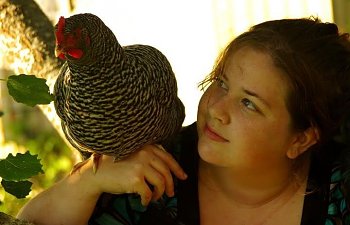 I never imagined chicken-keeping to be such a joyous stress-releiver. I often find myself out with the chickens, just watching them go about their day.
How could anyone stuff a chicken in a cage when they obviously have so much personality and enjoyment to give?! 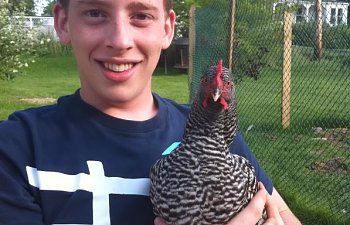 Our best friend Dylan also helped found our project of chicken-keeping. Though he wasn't much help with the building of the coop itself (sorry Dylan )
He was the one that picked out Carl. 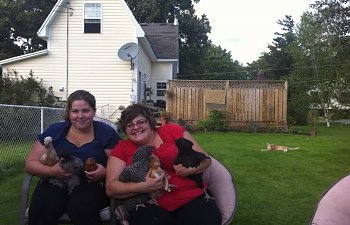 These are the first six, before things started to get crazy! From left to right: McDonalds, Lorraine, Nacho, Dixie, Carl (where's his head?!) and Wendy... Oh and Dexter the guard kitty. 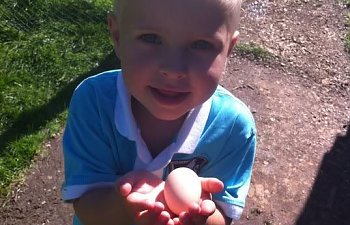 This is our very first egg! We were so excited we called everyone we know They didn't seem nearly as excited as we were... 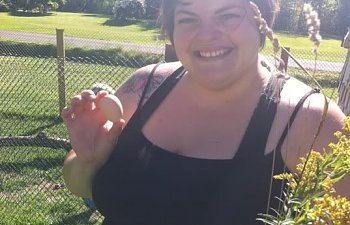 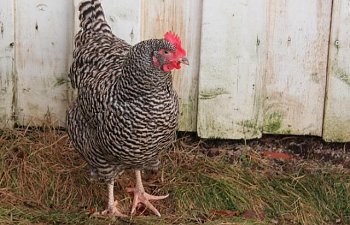 Dixie is my girl My very good girl! 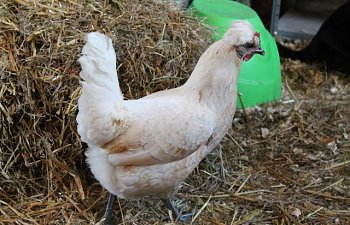 What a good girl! 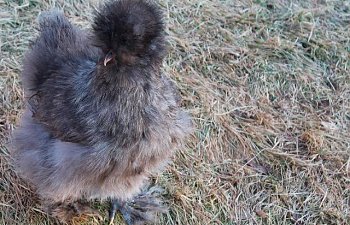 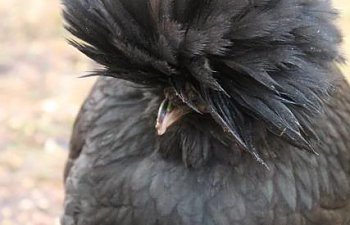 Wendy - our lovely polish girl who refuses to lay, despite the fact that she is going on 8 months old!
Wendy is our most cuddly girl! She does not try to run when you want to pick her up. She just stands there. When I hold her close she
talks to me. She will not leave my lap if put there. She has pretty good vision for a polish because her tophat is lopsided. Because of that, she is always looking at me
with a cocked head. 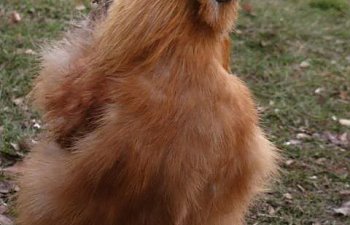 Steve - Our silkie Rooster!
Steve is a very sweet and gentle rooster. He feeds his girls before eating. He won't (because he's not allowed) to mate
our girls in our presence. He is on constant look out for potential predators so he can warn his girls. He stops squabbles.
He's also very sweet to the neighbourhood kids who are set on catching the little booger. He puts up a good chase! 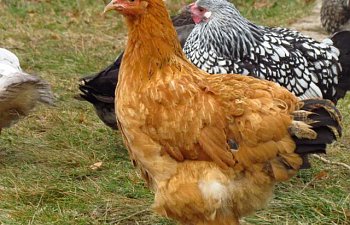 Mabel - Our buff/partrdige cochin.
Mabel is a sweetie-pie. She was 8 weeks old when we brought her home on September 24th 2011, and has almost doubled
in size since then. 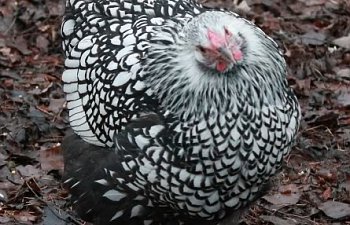 Dott - Our SLW
Dott is around 22 weeks or so.. She came to live with us on September 24th 2011 at 8 weeks old. She has flourished since then. She is so beautiful.. Wish she was friendlier though.
She is quite skittish... 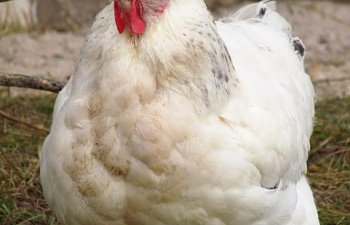 Denny, the head hen. She is a Delaware hen. We really wanted one that was laying, so we purchased her from the man who owns
our local feed store. He was part of his laying flock, so we had to convince him
She is molting right now, and looks awful.. 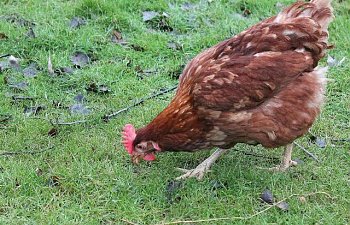 Penny - Our Production Red.
This girl is so nosey! Always in your face! She loves to be held and lays us a huge brown egg every day. 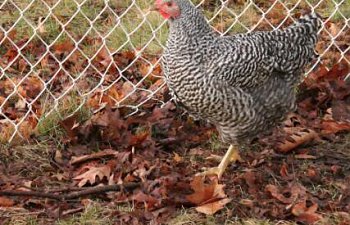 This is Marge - She is our BR pullet. Unsure on her age, though we brought her home on October 13th 2011
Marge still acts like a baby. She 'purs' like a content kitten.. not sure what you would call that noise they make. 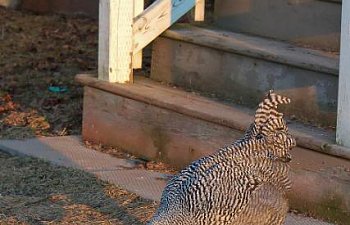 Jagger - Our BR Cockerel - He is the same age as Marge (whatever age that might be).
He poops on me everytime I hold him. EVERY. SINGLE. TIME. 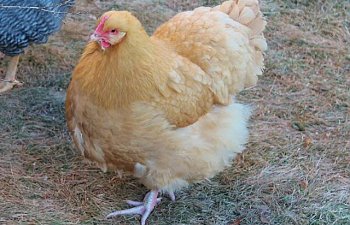 And THIS is Olive! Our beautiful Buff Orpington
We wanted a Buff Orpington so desperately! They are not popular around here though. I had to drive nearly three hours to pick her up.
Her parents won B.O.B at the show we bought her at. Hope one day I might show her myself! 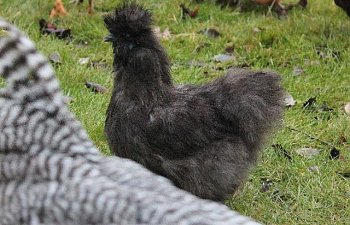 This is Pearl
We brought her home from the same breeder we acquired our buff silkie rooster from. She is very talkative and 'purrs' when you snuggle her.
According to the breeder, she was born in May or June. I am going to say July, because she is so much smaller than my silkie Lorraine who was born June 14th
(around that time.. She was supposed to be 8 weeks old when we brought her home on Aug 9)
I'm just going to say she is 4 1/2 months old.. Yeah.. Let's go with that. 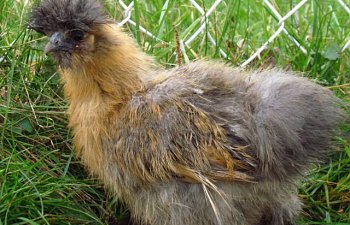 This is Ida. Ida will be the youngest one in the flock.. She should be around 3 months old. If I am assuming she is younger than
Pearl, but older than Lorraine was (8 weeks) when I brought her home.

Ida seems to be the daycare kids' favourite of the silkies. She is such a pretty partridge colour. 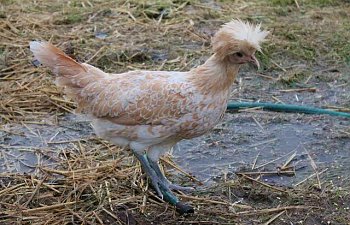 Harriett - Buff Laced Polish Pullet. Age - around 3 months or so (according to the breeder) she was aquired from the poultry exhibition as a young chick in September.
Harriet like most of the polish is hilarious. She is eccentric and funny. I am pretty sure she is a girl because the
cockerels all looked like cockerels. 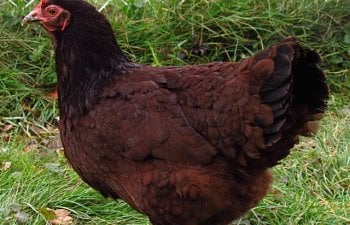 Ruby - RIR pullet. Age - around 5 - 6 months old.
Ruby is very easy to handle. She is pretty low on the pecking order, which surprised me. I thought RIR were fiesty? 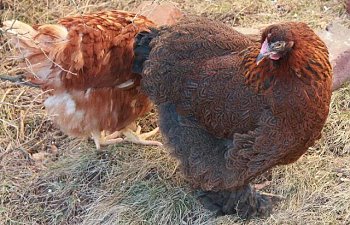 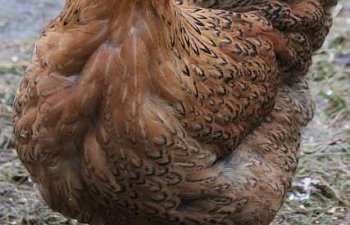 Honey - partridge/buff cochin. Honey is sweet and gentle. She loves to be snuggled and will stand on your feet until you
pick her up. She is at the very bottom of the pecking order. She is the exact same age as Mabel (hatch-mates!) but is
much smaller. She has a bad eye (not in the picture) but it's from an injury. We are applying ointment and babying her. 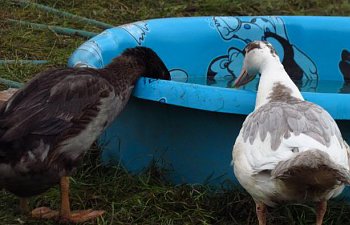 Ruth the mutt drake (runner x mallard) and Macy (lilac pied muscovy). The ducks sure are fun to watch!
Both are terrified of me :/ 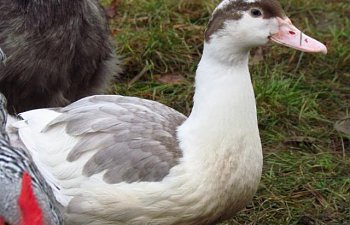 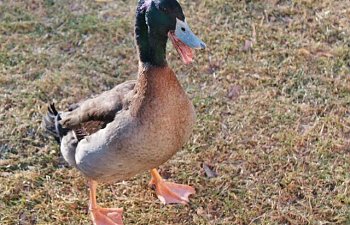 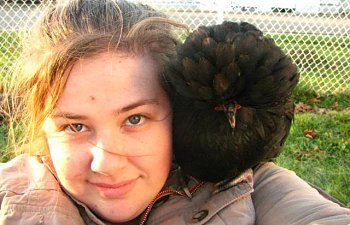 That's it for today! Thanks for reading!