Leave a rating
I am excited for my friend about her very cool Eglu Cube. Im also putting some "testamonials" about Eglu products here in order to help someone if they are wondering if an Eglu would work for their needs. The roof will slide and after unlatching, the back door will come off. The two orange trays are the poop trays. Easy cleaning is such an asset. Along with no annual painting maintenance. Attached run has skirting to deter predators. One thing that is particularly appealing to me after this scorching summer is the area beneath the cube is accessable to chickens, and is going to be in shade Here is the inside through the egg port looking from the nest box into the roost area. The door is closed and the white streak on the far wall is a vent. Direct look (chicken's eye view) from the nest box, through the hole looking at the roosting bars inside the Cube. Exterior view. New versions of the Cube have a door on the end that a human could get through (without crawling like the original door at the end of the run that was sized for chickens.) The waterer is larger and meant to be higher, and have nipple waterers attached beneath. Steps are attached, plastic. You can see the wheels in this picture and also in the one at the top of the page. A foot pedal lifts the entire run (even this extended run) and rolling is easy. This photo gives an idea of the skirting around the run. The opposite side, showing the egg port and the run shade to shade part of the run.
Modern back yard chicken keeping with a portable, safe, weather proof coop, that is easy to clean, and maintain. Two people assembled it, including unpacking in around (just under) 2-hours. What hen wouldn't be happy lving here?
Testamonials start here for anyone who is in the researching my coop phase of chicken keeping

October 2011--> Anyone thinking about getting an Eglu Cube for their chickens may appreciate this story. It came from the Omlet (makers of Eglu) newsletter.
Eglu Survives Bear Attack!
Remember the story of the Eglu Go that survived Hurricane Irene, without a scratch? Well, news just in from Vermont, not only did an Eglu Cube stand up to the storm too, it also survived not one but two bear attacks! Just a week after Irene blew into Canada, a black bear tried to break into the nesting area of Carol Hatcher's Cube twice. Although the bear obviously fancied a chicken dinner to help stock up for the Winter, it failed to get to the hens, leaving deep claw marks as a result of its effort. Carol said “I am thankful that bear paws do not have the dexterity to turn the black nesting box knob, and that the thick plastic body of the Cube stood up to strong bear claws.”
Having had no success with the chickens, the bear has since moved onto raiding the neighbour's pear tree instead. Carol spotted two black bears tucking into the pears just a few days later and even managed to get a photo of them! You can see a photo of one of the bear scratches too – proof that the Eglu has been brilliant again! 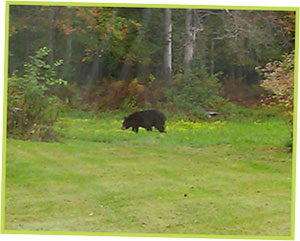 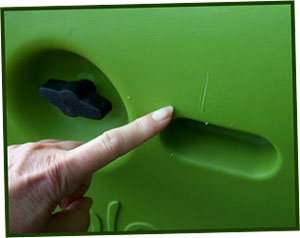 him paddington around her neighbours garden! Is he now wandering into the bushes to have a winnie the pooh?
hopefully the photos will survive...a Vermont black bear walking across a lawn, and a large scratch in the plastic outer surface of an Eglu Cube. A bear! yikes!!!!

This link is to a blog post where an Eglu classic survives a Fox attack.
http://www.jo-blogs.co.uk/2011/10/is-omlets-eglu-all-its-cracked-up-to-be/