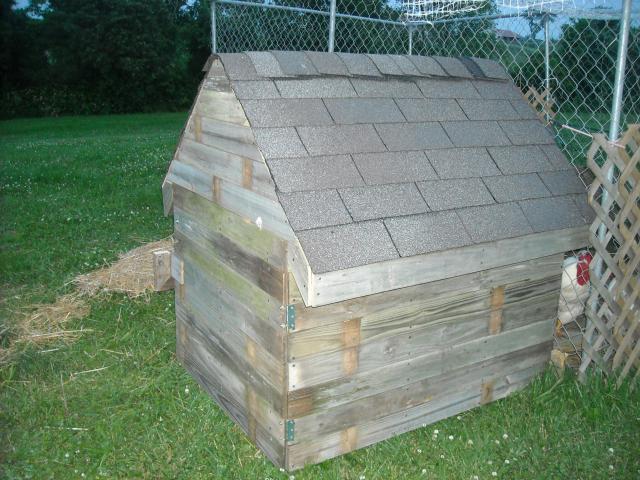 2011-01-09
This is my page dedicated to the chickens i own. My chickens aren't show quality, or as fancy as some others on the site. However, i don't mind that because they are healthy and provide enjoyment and eggs, which is the main reason for having them. My Coop isn't fancy, however, it is functional and provides a level of safety, and living space for the chickens that live there. Also, i can divide it in half for acclimating babies, which i have done in the past. Currently, I have 2 baby RIR's there now.
It is constructed from salvage materials i found laying around, or that i traded work for. As money permits, I will upgrade and improve whenever possible. So it will change from time to time. I used an old dog kennel for the main area. For safety, i wrapped plastic chicken fenceing around the entire perimeter, and then i put lattice work over that. The top was enclosed using metal chicken wire. The tarp's are somewhat functional; but have to be replaced from time to time due to wind damage. The run was added in the summer of 2009. It is simple and so far has served it's purpose. There is a small perch so the chickens can sit in the sun if they want.
The house is modest. It is made from plank fencing with shingles and plywood floor. The total cost, just guessing about $20 dollars. It has a door that opens to access the inside for cleaning and collecting the eggs. It is large enough to sleep all my hens/pullets and the rooster. Each one has a favorite spot where they sleep. This is Rocky. He is the very first chicken i owned. I believe he is a Delaware Rooster. His age is questionable. He was adopted from a neighbor. He was fighting with another rooster and bloody when i got him. However, he recovered nicely with only a broken spur. He is a neat character to watch and enjoy. He is frienldy but cautious at the same time. He guards Amy very closely and will safeguard her place when it is time for them to "hit the Hay". then he will lay beside her only after she has settled in. Also, Amy is the only hen he will allow to be around the food box when he is there. This is Amy my white hen. I got her around february 2009. She is, i believe, a white plymouth rock. She has established herself as the dominant hen of the coop. Also, she is the favered hen of my rooster, Rocky. She is quiet a character and very vocal, and seems to always get her way around the hen house. I aquired her from a neighbor and he said she was almost two years old. This is Adrian. I believe she is a red starr. I recieved her from a neighbor around february 2009. I believe she is a few months shy of being one year old. She lays an extra large egg and loves to have her picture taken. She also likes to be the center of attention.