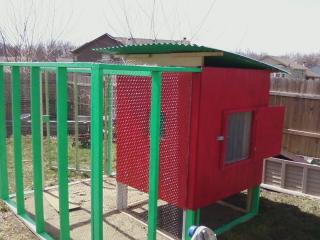 ​
We built this 8x8 run and 4x4 coop for 3 Rhode Island Reds, 1 Buff Orphington and 1 Barred Rock. We built it over an outdoor carpet than was once home to a pool and used construction grade sand as our surface. In the coop are 2 roosts, hanging food and water (stays cleaner) and pine shavings.​ We framed the run out of 2x4 studs and chicken wire. We went 24 inches on center to accommodate the width of the chicken wire. The coop will be 18 inches above the surface of the run. The North side of the structure is facing us and has a coop wall built in to save materials. The large framed out opening is an access to the coop for cleaning. If I could change anything from this step it would be to paint the studs before applying the chicken wire. ​ On some of the framing, such as the nest box here, we used metal joints to help build the angles. They are pretty cheap and made things so much easier. One mistake I made here is that the lower arms of the nest box frame were set in too far. This was a pretty easy fix, however. ​ This is our gate for access into the run on the South side. Again we let the width of the wire decide the width of the door, however this oversized door came in handy when introducing the younger chicks to the three reds. We just slid their cage inside. Worked great.​ Here is where the three reds lived while we were building their coop and we waited for the weather to turn. A simple dog crate that we wrapped in plastic to cut down on drafts and then covered in screen to keep the dogs and cat out. ​ ​
On the second day we framed in the rest of the coop. It is massively overbuilt but has stood up to a couple of big storms already. On this side, the East, there will be a 12x12 window just above the roosting area. ​ This is the South side of the coop. Just looking at all this framing can be a bit confusing but there is a small door framed on this side for access from the coop to the run. ​ The third day we put up the barn siding. Finally it starts to look like something. OK, its more of a bunker than a coop at this point but you can actually see the structure now at least. The North side now has the Screen door attached. The East side has the small window set up now. We stapled the screen to the studs and then put the siding over it. My wife was a bit nervous about how it looked at this point.​ ​
After putting the siding and the little door on this side I was a bit nervous about how it looked. That door seemed real small but the chickens use it just fine. Just a big wall with a tiny door. Wasn't sure about how to make the ramp at this time.​ ​
I fixed the bottom of the nest box and got the siding on it. I put all the caulking on the outside so that the chickens wouldn't eat it.​ Test driving the run. We let them out here in the daytime at this point, about 5 weeks, but brought them back in at night. They looked so small in there.​ A scrap piece of barn siding fit perfectly as the ramp and some firewood attached gave them a means to use it. It works pretty good and we all like the way it looks.​ ​
There they are finally living outside. I know it's bigger, way bigger, than it needs to be, but do you want to live in the smallest space you needed? I didn't think so.​
​ ​
We have hawks around here so we all felt more comfortable with a roof of sorts over the run. Beams held up by more metal brackets and chicken wire. actually built this part in the driveway and sort of unrolled it into place. Had not learned the lesson about prepainted yet either. We also have the green roof in at his point.​
​ ​
The Buff (Dee) and the Rock (Frisco) meet the reds. At the top is Venus, Persephone is in the middle and Katie is at he bottom of the pic. ​ The reds having a yard day. The babies have the run and coop to themselves while the reds play.​ ​
Dee and Frisco have a bit of yard time. They stay very close to each other all the time, more so than the reds. ​ ​
My youngest and her Dee and Frisco.
​ ​
We realized that it's sort of dark in the coop so I added a light only window t othe South side of the coop.​
​
​
Reactions: LaFemmeKatia

Nice coop and run. I like that the baby chicks can be with the big chickens in their crate.
Nice coop. Could use a few more instructions about how it was built. Started off good, but then the instructions stopped. Liked how you reflected on what you would do differently.
Read more…