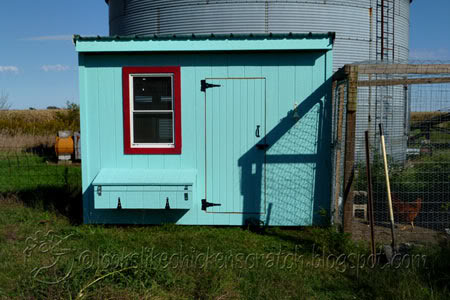 These are pictures of the progress (sort of-I didn't take pics that often) of our new coop. We started it somewhere around the end of August and finished it and put it in place on October 2nd. It took longer than we had hoped because my husband has been pretty busy getting ready to harvest crops. So anyway here goes:
August 29th-the floor. I took this right before I painted it. 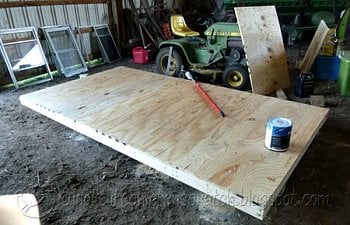 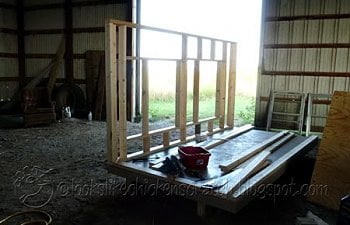 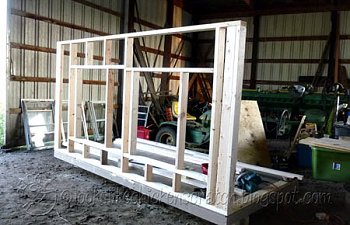 September 2nd-the walls are up! Minus siding. I'm getting excited now. 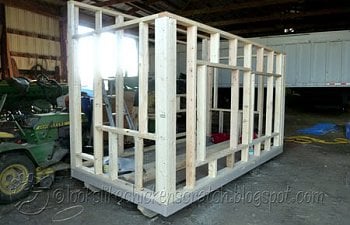 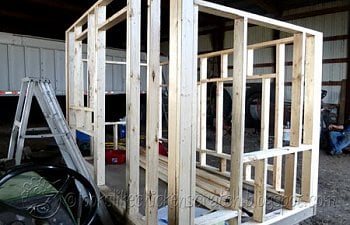 September 10th - the siding and roof joists are done. 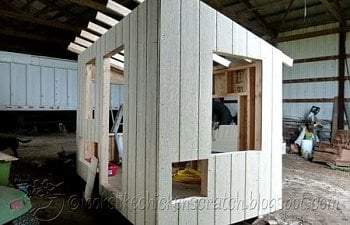 October 2nd-it's done!! (I did take some pics between the last ones and these but they don't look very different-we mostly worked on the inside and the next boxes during that time). As you can see from the pics above, we built it in the shed so that we would be close to the electricity and also so that we could work on it in rainy or windy weather. When it was finished my husband used the tractor to drag, and then push, it in place. 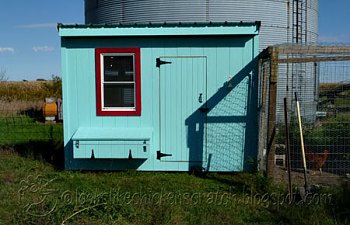 In the picture below you can see the old coop in the background-that will be taken out as soon as my husband has a chance to do it. We have to remove the fencing on that end of the run to get it out. 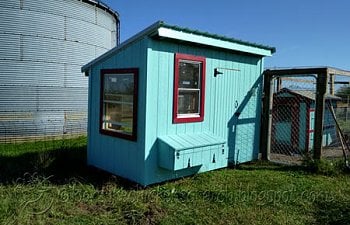 This shows the ventilation on the east side. We will make removable/hinged covers for super bad weather. Either a couple of wooden doors or some heavy canvas. There is a fence there but I can reach over it easily to open and close the windows-the windows on this side and the west side open from outside, so we just stapled hardware cloth to the openings on the inside. You can see my hubby's hand cutting the wire for the pop door. 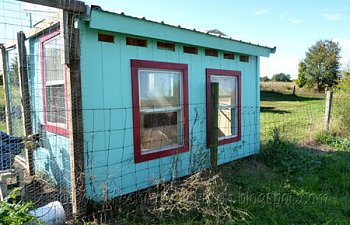 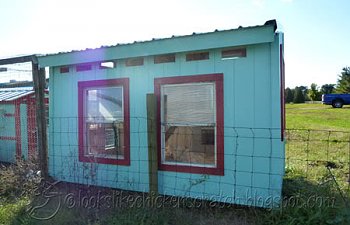 A better pic of my carpenter. He does not like building things much so this was totally a labor of love for him. There is more ventilation up above on this side but it's hard to see. It's behind that top beam but it's a few inches away from it, so it isn't obstructed. I can also open the windows a bit from the top to add more up-high vents and we may add some to the other two walls if needed. 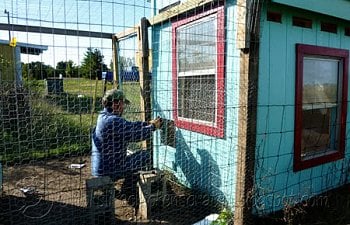 Interior pics. We used leftover siding to cover up some of the studs. We didn't have enough to cover all of them, and the north wall has styrofoam insulation in between the studs. This is the north wall. This window opens from the inside so I made removable screens for it. The roost is on the right. Oh I also started painting the inside but decided not to since I would have had to buy another gallon of paint plus I was running out of time and hand strength (I have carpal tunnel syndrome). 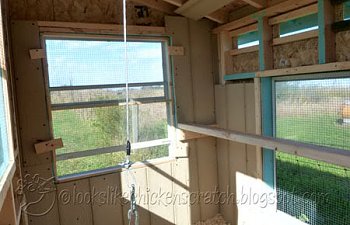 This cable is for hanging the feeder. Nest boxes in the background. 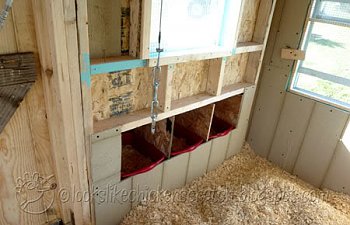 The pop door. It's made of a cutting board and can be opened and closed from outside the coop. This is the south wall and it also has a window only openable from the inside so it also has a removable screen. You can see my hubby outside the pop door, cutting the wire so the chooks will fit through... 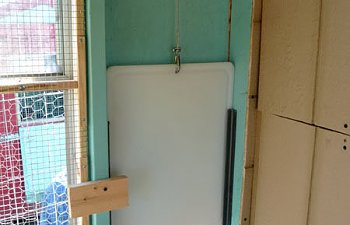 The south end again. Obviously the inside siding is a patchwork of leftovers... 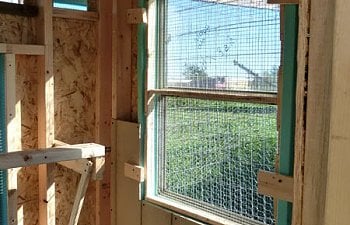 The nest boxes. The tubs slide out. I put two hasps on it..just to be safe. 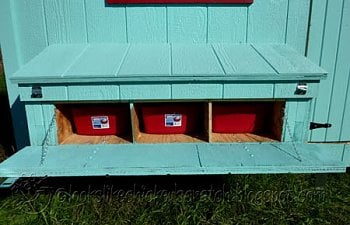 The rooster bell I got from ebay. Cheap! I may have to move it. I hit my head on it twice today coming out of the run (the run door is on the right side of the post in this picture). You can also see the cable that opens and closes the pop door in this pic. 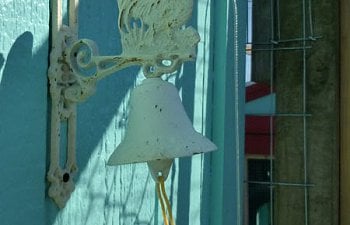 This look like a fine coop. Be good to have some measurements and dimensions.
I would have loved yo see measurements.
Read more…

I like your tub nest boxes. Looks to me like it would make cleaning them easier. Let us know how well they work for you and the girls.
I like the color of your paint choice...reminds me of 'robin egg blue'.......nice coop and pen!
wow thats really nice, good job
very nice!
You must log in or register to reply here.