Leave a rating
Welcome to our BYC Page!
I'm Meg, a freelance graphic & web designer specializing in digital scrapbooking products & WordPress. My husband and I are homesteaders and homeschoolers at heart, even though we don't have much of a homestead or any children of our own yet. We're based in Central California and love to travel!

​
Our flock is just two hens and a pullet at the moment - but we can't wait to add to it once we have more land! I grew up owning birds all my life, and had several close friends with chickens. We finally started our path into Backyard Chicken ownership in Fall of 2010. We built a coop based on LOTS of time browsing BYC and reading the BYC for Dummies book. We waited until May of 2011 to finally get our first three pullets from the feed store, and we named them after some of our favorite television characters - Patty, Selma, and Marge.
By the time they were three weeks old, I had a feeling about Marge... her tail feathers weren't coming in at the same rate Patty & Selma's were. I took my concerns to the BYC forum and got mixed results. By the time they were three months old, those tell-tale saddle feathers came in. 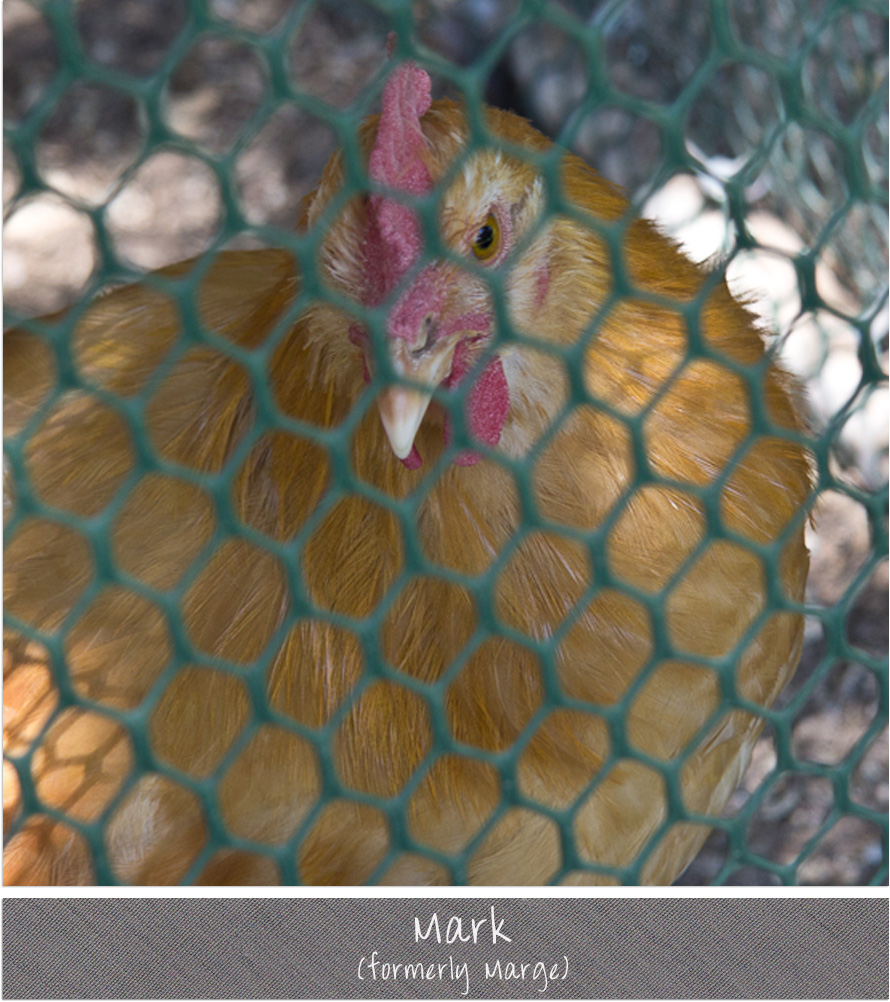 Needless to say, with my husband being a LEO working the nightshift... there was no way we were going to let a roo stay around. He was also living up to the mean rep BO roos have... back to the feed store Mark went!
While we were leaving the feed store, I guess you could say we got hit in the face with chicken math... We fell in love with a 5 1/2 week old RIR pullet, Marge #2!!! 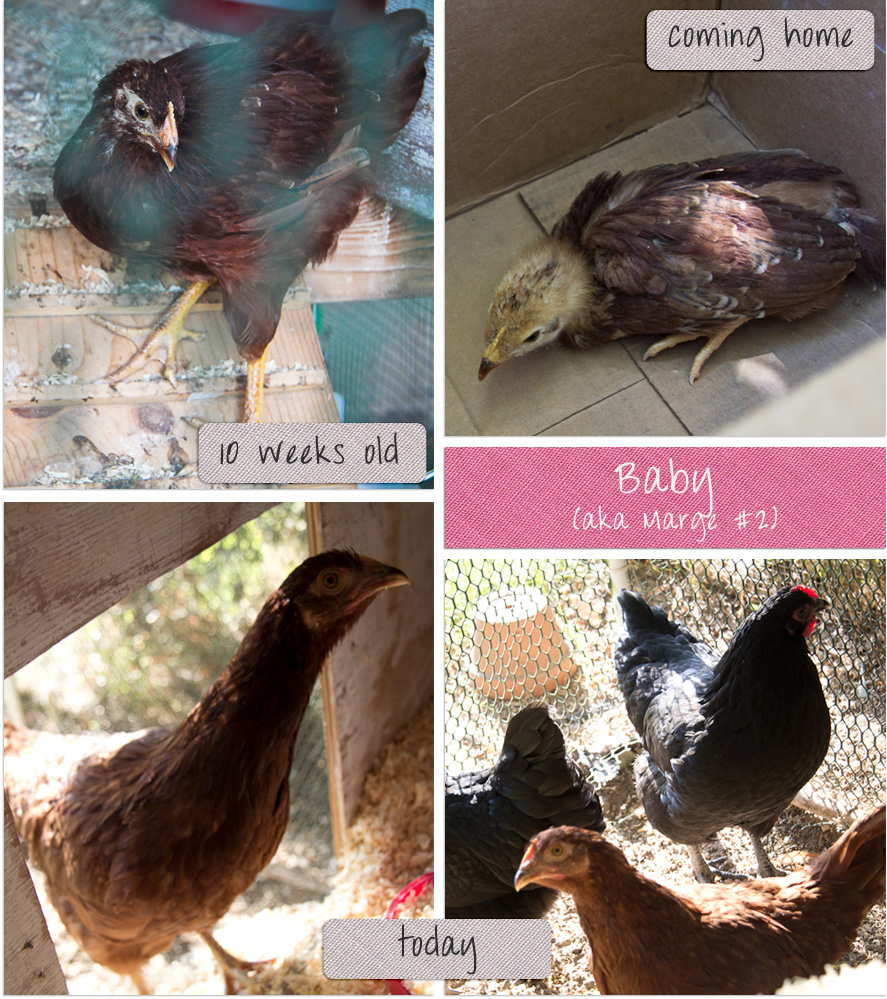 When Marge #2 came home, she was terrified of the bigger girls and put herself in a corner of the run, refusing to budge. She earned the nickname Baby at that moment... it's also the only name she'll come to when called. Soo, she spent the next few weeks being babied inside with daily visits with the big girls. Yes, she comes when she's called... she also demands to be held... and fancies herself an escape artist. (the above montage is from 10/2011) 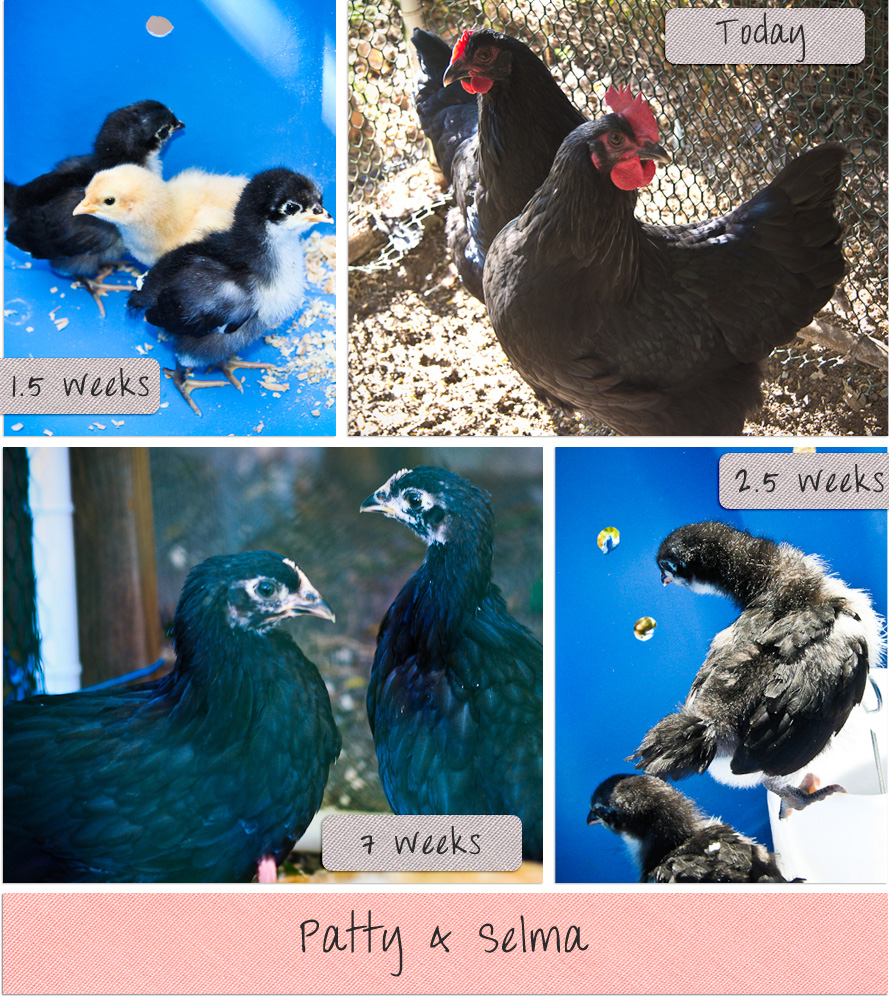 Patty and Selma have grown up to be lovely Black Australorps, even though at 26 weeks they're a whole bunch of egg songs but no eggs! Patty is the boss, she's the one with the major comb and wattles going on... but her body is definitely all woman! Selma is the sweetheart, curious - always the first to try something new! Hopefully they'll have some eggs to go with those egg songs soon! (the above montage is from 10/2011)
That's it for now!