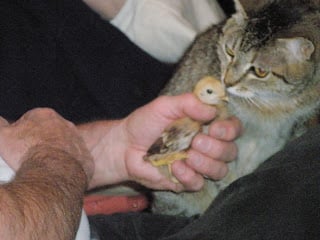 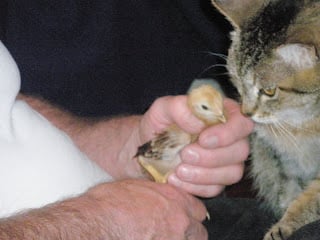 Our cat is getting old. She has slowed down, finally. She used to be full-tilt hell on get-away-sticks, in the middle of everything. She daily earned her name Frenzy. Now, she is more likely to snooze languidly in the sunshine than to curiously investigate anything that moves. She more often ignores adventure than joins in.

Once a blur of fearsome energy, she now pauses to smell, observe, or enjoy. Like a old person. But, I don't feel sorry for her. It's as if she is finally able to enjoy the things around her, to savor everyday things.

She no longer hunts. For ten years, she would be gone for long periods everyday in the summer. She would return to eat voraciously and then leave again. By August, she was lean and ropy and vigilant from months of outdoors survival. We never saw a mouse around our place. Now, she will only open one eye to watch the yard squirrel sneak past to steal chicken food. It's as if she is mentally weighing the cost versus benefit; is the expended effort and abandonment of a great resting spot worth seeing the squirrel scamper away? Usually not.

Maybe she has realized, like aging people the world over, that there is room for more than one point of view or lifestyle. She has even begun to show an accepting sense of curiosity and tolerance toward things she would have formerly tried to destroy or to kill and eat. Like the baby chicks we have in the brooder in the family room.

When my husband was holding a chick, Frenzy got up on his lap to cuddle. Finding the chick there, she gently smelled and nuzzled it before lying down beside it and dozing off. Life lesson from an old cat; there is room on the lap for former enemies.