Our Coop Is Done 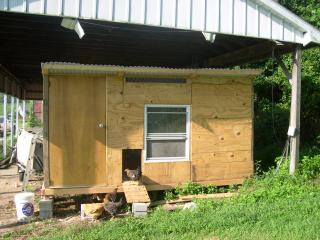 Zoomer finally got the coop done last weekend and we got the chicks in it. They were 12 weeks old. Can you cay procrastinate? He did not really want to spend money on the coop, so we got some free scrap plywood from freecycle and we already had the four oak posts for the corners, so he only had to buy the boards for the frame, the roofing, and the hardware cloth and chicken wire. Oh nails and screws also. Our landlords gave us two windows. He put this coop together with plans in his head, so I am very proud of him. It measures 4 feet by 12 feet. We have two vents covered with hardware cloth and covered the windows with hardware cloth so we could leave them open at night. It is not the prettiest coop, by far, but it works. I still need to caulk between the boards and some holes before winter, and we still have to install the nesting boxes. The chicks spent one week inside, and they are on their third day free ranging now and go back to the coop on their own every eveing. Except their first time out, they did not watn to go back in and we had lots of fun trying to catch them and put them in. They were flying back out the door as fast as we could put them in. LOL! It was a site. But they are all very good now about going in on their own. The chicken door latches on the inside so coons cannot get it open.
I wish I could afford to get some shingles to put on the outside, but just don't have that kind of money right now. , so will probably paint it. I was thinking of painting it like the old hippie buses with peace signs and flowers and putting up a sign that says "Hippie Chicks" 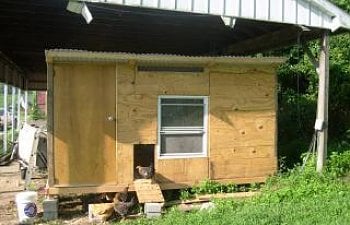 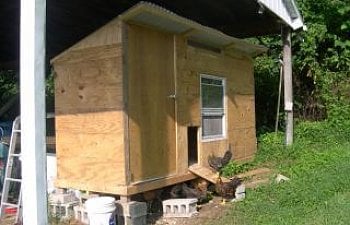 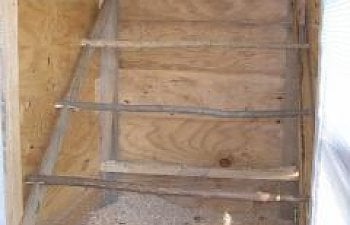 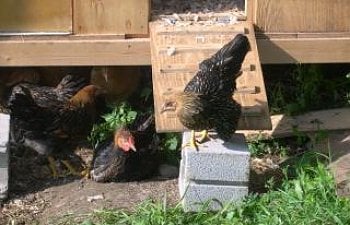