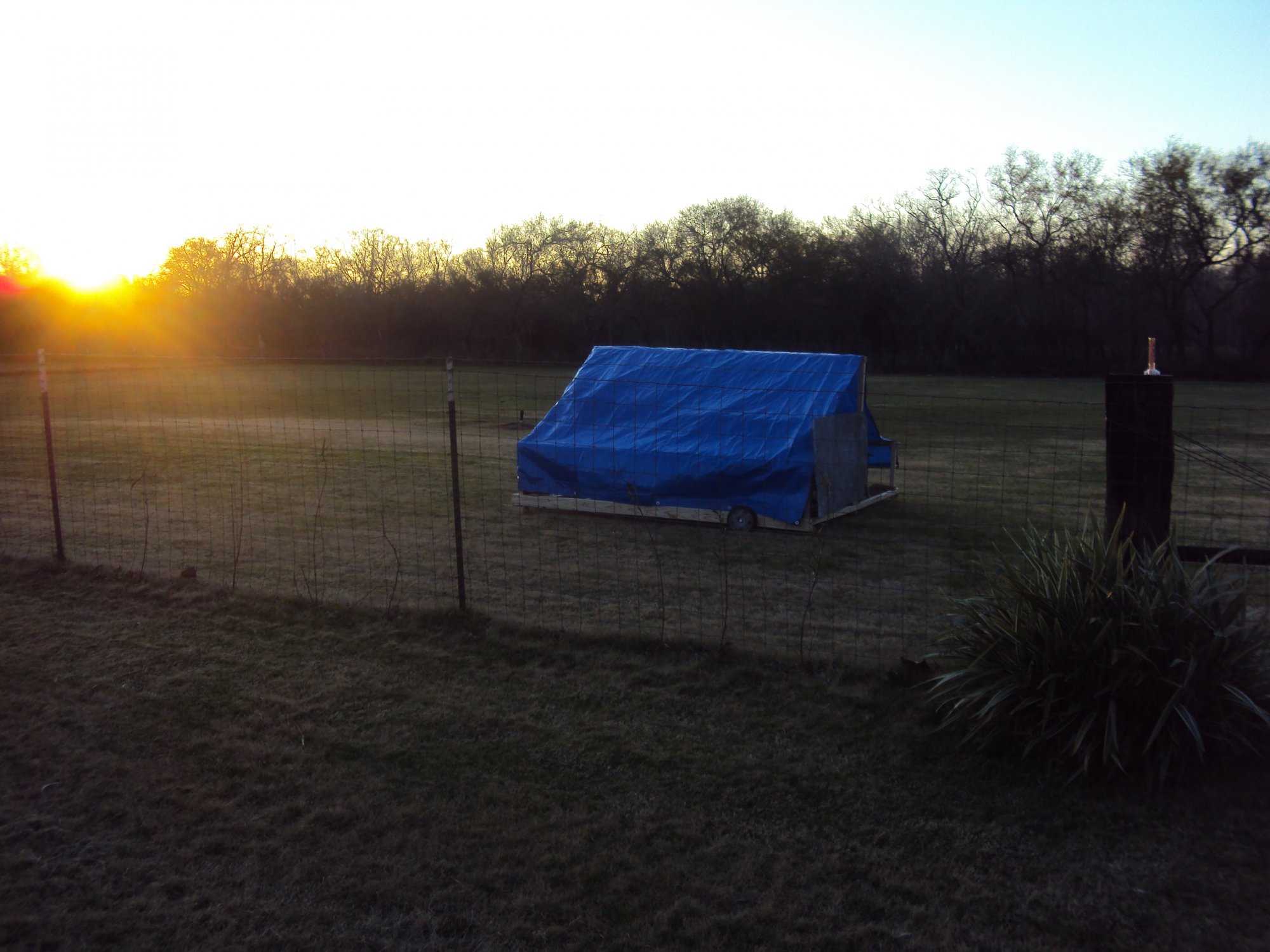 After stalking all the fabulous, well-thought-out and downright gorgeous chicken coop plans on here, I laugh at little at posting this homely, but functional and portable chicken shelter. I hope that someone can at least get some ideas from my work.
The goal: To build a shelter that would protect 30 laying hens from the rain, sun, and wind. It needed to be built inexpensively, and be able to be moved easily by one person.
The construction crew: My not-so-little brother and I. We have, over the years, built a variety of "masterpieces" as our construction skills grow.

It was becoming apparent by the turn of the year that my ever-growing flock needed a new shelter, as the old one was falling apart, was too small, and was impossible to move without extreme effort. I drew up nearly a dozen designs for a portable shelter, but they were all either too heavy to be moved by one person, or they were too expensive to build, or they were too small for my flock. My family laughed that pretty much every morning at breakfast I would come to the table all excited, with plans in hand, and say, "This is what I'm going to build," and then by lunch decide it wouldn't work and move on to designing a new one
Since I'm a huge Joel Salatin fan (don't know who he is? You're missing out), I google searched "how to build an eggmobile," and looked at the images that turned up. One of them caught my eye, seen here printed out: I thought that this looked like something that would match the goal. I built mine based on this picture, but in the end it looked quite different. We added wheels, used chicken wire in place of cattle panels, added a board "runway" down the middle, and added nests. The whole project took us 6 hours, and cost me around $50, not including the several boards we had left over. I did have some of the materials here at the farm already, including the wheels, tarps, nests, chicken wire, and scrap boards.

The dimensions were to be 8x8. We started off with two 2x4x8's, joined to ripped boards by 3 inch wood screws. We used ripped 2x4's in this project as much as possible, to keep costs low and to reduce weight. As I always say, "It's not going to hold elephants." My brother securing the outer frame together The floor joists, the roosts, were spaced 1 foot across. In the future, I would like to place them a little closer, but we were trying to reduce weight. Next, the supports for the roof were cut and installed. The shorter ones are 1 1/2 feet; the taller ones are 4 feet. We added some corner braces, made out of scrap lumber, and secured with 2 inch nails. We also supported the center posts with some scrap lumber supports, secured with 1 inch screws. You can see here the "runway" down the center of the floor. This is to add stability and give the chickens a place to stand on while they eat. Next came the wheels. These were old ball bering wheels off a Honda push mower. They were secured into the boards with 4 1/2 inch bolts with sleeves. We added a couple spacers to prevent the wheel from rubbing on the frame too much. We secured the 10x12 tarp with zip ties. I removed the nests from the old pen and set them inside this one. We have plans to secure the nests on the outside someday, so I can collect eggs without having to "hunker down" inside the tractor. I added some old scrap tin I had laying around. This will help block the winds in the winter. I will probably remove these in the hot SE Texas summers. I bent the edges over so I wouldn't get a nasty tin scrape (been there done that!) Right now I just have braided baling twine and a stick to pull this baby. I plan to use actual rope in the future

When this coop is not being moved, I place wooden blocks, made out of two 2x4's nailed together, under the front to keep it level.
Here is the finished product out to pasture: All the flock enjoying their new shelter. The electric fence, energized at 7000+ volts, keeps out 4-legged predators who'd like to enjoy a chicken dinner. 2 noisy guinea hens and attentive roosters protect the flock from aerial predators. Well, that's it. I hope that you at least got some ideas from our crude little shelter. It turned out being even lighter than I had expected, and is pretty easy to move. Even though it's simple, my brother and I are really proud of it, and it looks like it will serve its purpose. Please let me know if you have any questions, or things I should improve/add--leave me a comment! Thanks for reading!

*UPDATE* February 18th, 2016 After using this shelter for awhile, several improvements were made. (Always improving, right?) I put the nests on the outside of the coop and added additional roosts. We've been having trouble with pesky owls sneaking in and beheading and stealing chickens at night, so I added some chicken wire on either side. So far, it has worked. Here's a few pictures of the coop "in use"

I apologize for the low picture quality, my phone camera isn't the best. Thank you again for reading this article
Reactions: lifetimechicklover

You did a good job of building a shelter that works for your needs. Good explanations and good pictures that show what's is happening as you work (my phone camera is not too great either). I was worried about overcrowding but I see they only sleep, lay and sometimes eat inside this. They have the whole pasture for a run. Sorry about the owl, glad you added protection; they are sneaky.
Read more…

Good planning.
You have any issues with strong winds? My first portable coops blew away in a bad storm, now I build them heavier on purpose.
@Brookliner thank you!

I can't say it looks amazing, but I like it. It is very functional and somewhat charming

You have every right to be proud. Do you have a problem with the birds sleeping in the nesting boxes?
@Cheep N Peep they did all pile in the nests the first night, which I was afraid of. I now have a board that goes over the fronts at night and is raised in the mornings. You're right, it is definitely not pretty, but it has been working out for me like no other portable pen ever has. Overall I'm super pleased. Thanks for your kind words!