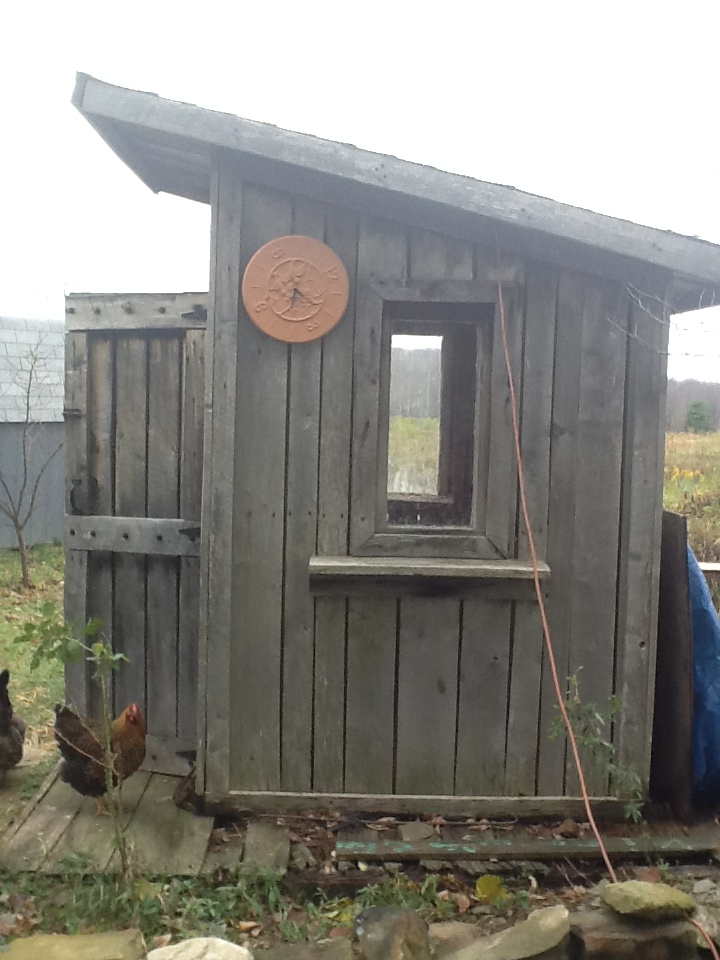 Rustic Recycled Chicken Coop​
Hi! I'm Rachel and I'm a Chicken-aholic!
We moved into our house in December 2008. At the time we had 2 hens and 4 small pullets who were all living in a fairly small coop. We needed something bigger and better.We now have 6 hens (my babies are all grown up!) and 5 more pullets. Our flock consists of 2 Barred Rocks, 3 Silver Laced Wyandottes, 1 Buff Orpington, 1 Black Austrolorp, 2 Rhode Island Reds, and 2 Ameracaunas. Of course I want more! I'm addicted to chickens!
I'm in the construction industry so this was almost second nature to me. I drew up all the plans using CAD software. I'm hoping to soon have a materials list and to callout the wood on the plans and then I'll add those. The bonus is that other than the roof and some of the framing, the entire coop was made out of recycled/reused materials that we had on hand. The previous owners left a lot of wood here, so instead of tossing it out, we put it to good use. I really like the rustic feel of the coop too. There are a few things I would change, of course, but for the most part I'm really happy.

There were issues during the building of the coop, which are more comical than anything else. About 2 hours into the build, our corded power drill gave up the ghost. About an hour after that our best and biggest hammer broke in two. So the rest of it was completed using a screwdriver, a cordless drill that can't keep a charge, and a much smaller hammer. It ended up taking us a lot longer than it should have.
I did make sure to take photos of the building process. Featuring my husband, Tom, as the builder. The posts were already in the ground so we had to build up the rear posts to make them tall enough to drain water off of the roof. The posts and all wood in contact with the ground is pressure treated. Here we've added the roofing joists at 18" on center to help support the roof. The walls were made out of 2x12 douglas fir boards that were left on our property. Can't beat free! We put plywood under the metal panels to help support them. Since we like the rustic look we went with corrugated galvanized metal roofing. The previous owners had also left deck footings which we used to support the nest boxes. Here are our nest boxes. The coop is now 8 months old in this photo. We just had a huge storm come through so it's a little wet, but for the most part it stays dry where it needs to. We decided to stick with a dirt floor covered with hay. We don't have any predators other than the very occasional hawk, so we're not worried about anything digging under the walls. We just rake everything out as needed to keep it nice a clean. The chickens also LOVE it in the summer when we hose the dirt down because it's shady and it stays wet for quite awhile. Here's the yard adjoining the coop.
Our next project is to run some electricity out to the coop for lights and heating.

Some tips we've learned from this build:
1. Make sure to extend the roof out farther than you think you should. Our roof extends just as far as the nest boxes stick out and the top ones still get water into them when it rains heavily.
2. When using metal sheeting for the roof situate so that it's slopes down to the north (or away from the main living area). We have it to the east facing our house and patio, and in the summer the reflection is blindingly bright, esp. when it was shiny and new.
3. As with any other building project ALWAYS measure twice and cut once! Here is our coop today. We are running an extension cord (bad I know!) to power our lamp for them. We live in a Mediterranean climate with warm summers and mild winters so we don't have to worry about snow.