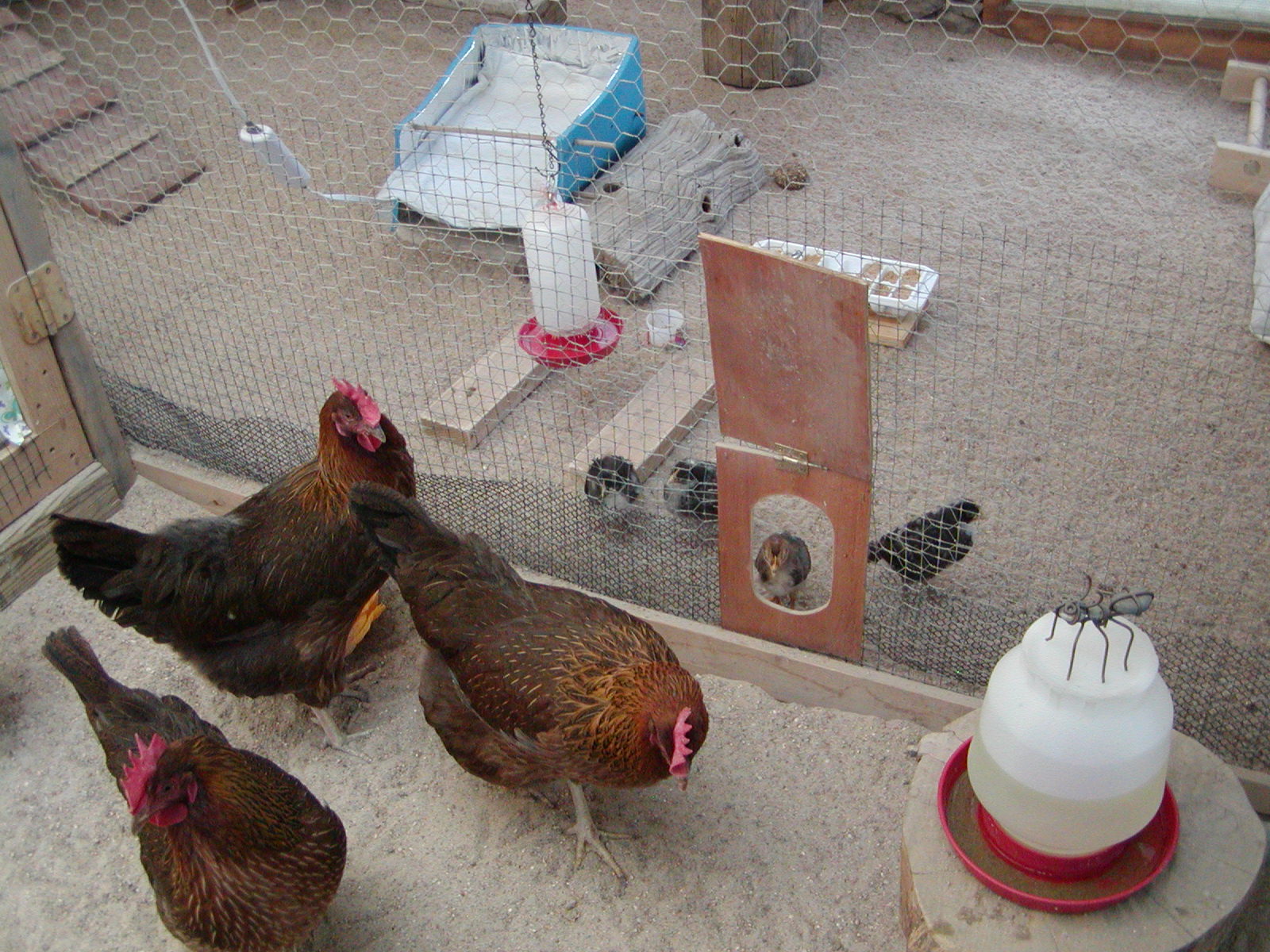 Six years ago when I got my second batch of day-old baby chicks, I thought I had arrived at the ultimate solution for a brooder. I had just joined BYC and stumbled onto a thread where everyone was lamenting how scared of them their chicks were. I saw that the one thing everyone, including me, had in common was we were raising our chicks in a brooder placed on the floor, and it required bending over the top of the box and reaching down inside to handle the chicks.

The sad consequence of this is chicks who are terrified of the hands diving at them from above, resembling to them an attack of a predator from the sky. Of those chicks I raised in that first brooder, the two still remaining in my flock are still afraid to have me handle them, shying away from my hands when I go to touch them.

To solve this problem, I found a fresh cardboard appliance box, placed it on a table, and cut an access door into the side. The difference in the chicks was stunning. From day one, the new babies were calm, friendly, and easily handled. When they grew into adults, they remained easy to handle, and some have been total lap chickens. Beginning to get ideas

Following that success, I then graduated to my garage plant grow window, having grown weary of all the dust and dander in every nook and cranny of the room in the house where I was raising the chicks. The window was two feet by five feet and just the right size for a half dozen chicks. It was bright and sunny and the chicks could see outside where a whole other world was going by. It was a simple matter to stretch netting across the back of the window to keep the chicks safe, and I draped a shade curtain over the top to cut down on the direct sunlight. It was a huge success. I realized an unexpected dividend from raising chicks where they were able to see all sorts of wildlife going by, as well as people coming and going. Those chicks were practically fearless. The reason, I concluded, was because they had a large world view from the very beginning. They weren't stuck in a confining box with only bare walls of a brooder box to look at.

Imagine spending the first weeks of your life in such confinement, then suddenly being moved into a whole other environment with adult chickens in a coop and run with other strange, huge animals and humans running around the perimeter. How strange and stressful! What an adjustment!

Then something happened to radically change the way I brooded chicks. I ran across Blooie's thread on the chick forum “Mama Heating Pad in the Brooder”. It was a revelation! I was about to get some baby chicks and I knew this was the way I wanted to go. Not only that, but I saw where I could brood the chicks right outside in my run and get all the benefits I had gotten from brooding in my garage grow window plus a whole lot of new ones! I was excited!

The chick learning curve is shortened

Chicks raised in the confines of a brooder box have no concept of anything other than what goes on in those few square feet of brooder space. It's as if nothing else exists. Chicks are learning constantly that are raised within the flock by a broody hen. They develop self confidence by observing the behavior of the adult chickens around them, and they gradually learn their place in the social order with very little stress or fear. Raising chicks under the heating pad system right along side the adult flock very closely simulates, and may well be the next best thing, to being raised by a broody hen. The chicks raised in a brooder also have no concept of dangers inherent in big chickens, and it's terrifying to suddenly find themselves thrust into this environment from a brooder box indoors after spending a good six or eight weeks in that over-protective environment. Baby chicks raised from day one in a safe pen in full view of the adults have the advantage of being accepted as flock members from the start, as well as being able to observe the adults, learning how the pecking order works before being consigned to it themselves. For this reason, many chicken keepers don't integrate their chicks with the adults until they're almost full grown at three or four months. The chicks are virtual strangers when introduced to the flock of adults, and integration is anything but a simple matter. Chicks raised in view of the adults can begin mingling with them by age three weeks, using small, chick-size openings (5"x 7") that I call portals, and are fully integrated and sleeping in the coop by five or six weeks, unafraid of the adults and full members of the flock while other chicks are still in the brooder.

Utilizing these portals, the chicks are able to access their safe pen from several points in my run, making it possible for them to mingle with the adults, engage in the fine sport of teasing the adult chickens, and be safe exploring the rest of the run without the risk of being cornered and injured. It's one more way my chicks are able to develop self confidence very early on in their development.

I installed my two-day old chicks right from the mail order packing box into the safe pen in my covered run, which had the sides shielded from the wind and weather but was otherwise unheated, except by the sun. The heating pad cave was placed in the center of a roomy, 100 square foot pen. It was early May when the first chicks began growing up out in the run, and the nights were still getting down into the 30s, and the days weren't much warmer than 50F. The chicks thrived.

And that gets me to another huge advantage over indoor brooding. Chicks raised outdoors where the ambient temps are very cool will be cold hardened very early on. Some chicks remain in a heated indoor brooder for weeks, even several months in some cases. Then when it comes time to move them outdoors, it requires a period of acclimatizing to get them ready to tolerate the much colder temps. Chicks raised outdoors, whether under a broody hen or a heating pad system, require no acclimatizing at all.

In fact, some of us have noticed that these outdoor raised chicks feather out much sooner than those we've raised previously in an indoor setting. Now, that's a bonus, if there ever was one!

Chicks raised indoors under a heat lamp may have over-heating issues such as pasty-butt, a possibly deadly condition in baby chicks during the earliest days. Chicks in a cool, outdoor environment rarely, if ever, have this problem.

In addition to being cold-hardened early, chicks raised outdoors also may have the advantage of being mildly exposed to ordinary pathogens present in the coop and run soils during their earliest days when their bodies are open to acquiring immunities and resistance against these pathogens. They may be healthier for it. Another bonus.

It's so much more fun for everyone Finally, chicks that are able to grow up in an outdoor brooding pen with lots of space in which to frolic, run around, and flex their wings and even try out the concept of flying appear to be much happier and develop much more naturally. It's certainly a lot more fun for a chick mom or dad to get in and play with the babies, and the chicks are calm and friendly and receptive to being played with.

There is never the problem that I wrote about in the very beginning of this essay. The chicks see my entire body, and there's nothing in their DNA, when they see all of me, that triggers a primal fear reaction as does disembodied hands diving at them from the top of a confining brooder box.

Chicks raised outdoors with the adult flock, in a safe pen with lots of space and freedom, acquire important immunities, cold resistance, knowledge, and skills that are denied chicks raised in the over protective environment of an indoor brooder. As far as I'm concerned, it's, hands down, the best way to raise chicks. Fabulous and inspiring article! I love the concept of not terrifying the chicks with hands coming down from above.

One thing that might help for things like this (both for articles and comments) is for people to mention their average last frost date. That helps everyone put things in perspective, when talking about outdoor conditions and activities.

I have my very first batch of 32 chicks coming from Cackle Hatchery at the beginning of April (25 CX, 7 Dark Brahmas). My average last frost date in the northern Shenandoah Valley is April 22. With both a heat blanket brooder and a 250w heat lamp, I was going to raise them in the barn, inside a doubled cardboard "Chick Corral" (just a strip of cardboard). I'm going to experiment with it this weekend, but I might run an extension cord out to the coop, and see if I can maintain a stable temperature in there. If I can, the chicks will have a warm brooder that is open on one side, where they can venture out and see the world outside the coop (but still behind hardware cloth). They will also naturally explore the coop as they get bigger and the days get warmer. When they are really comfortable in the coop, I'll hook up the door, so they can go out.

In the meantime, the mess the chicks make will just be the start of the DLM in the coop.
Last edited: Jan 30, 2020
Thank you very much for sharing your experiences!
Excelent writing, enjoyable yo read , beautiful photos, valuable learning tool.
Read more…

They definitely key off the 'hand from above' thing.
I brood in the Garage. And in Northern MN...that means I brood Mid April. When we can do field trips to the garden and such. No House chicks for me.

Very good article. Now my dilemma is i bought 5 day old chicks and have them in a indoor brooder (i am a first time chicken mommy) and need/want to transition my chicks outside to a coop and i live in central MN. It is suppose to be in the 40's and 50's during the day and in the 30's at night this next week and a half. The new coop is in an unheated garage. How do i do this transition? I do not have them getting any heat at all right now but would love to dust my house and stop sneezing..lol thanks for any advice...
Depending on how old they are and how far along they are feathering out, you could move them now if you provide adequate heat for their age and level of development. It would also help to expose them to the outdoors and grass in your yard, for a half hour at first and increase their day romps each day a little longer. That will help the transition tremendously by acclimatizing them to cooler temps.
You must log in or register to reply here.