​
Egg eating is a nasty habit sometimes found in young pullets, and even older hens. Although many people may say egg eating is impossible to break, and to just cull the hen, in many cases this is not true. Egg eating often starts when an egg is accidentally broken in the nest box, and the hen pecks at it. Finding that this weird yellow substance is tasty, they will quickly devour it, and when they lay their next egg- look for more. Other hens that catch the original one doing this habit may even join in- and you’ll end up with a whole flock of egg eaters. That’s why it’s very important to break this as soon as possible. Below are six helpful tips to breaking your egg eater:

#1. This is the most common used method among backyard chickeners. Take a thumbtack or a small nail, and poke a small hole in each end of the egg. Then blow on one end, until the egg is empty. Fill up the egg with mustard, or dish-soap. Then place it in the nesting box. Chickens hate the taste of mustard, and once they peck into that, they may not be trying it again. It may take a couple tries using this method, just in case it doesn’t work the first time.
#2. Place golf balls, or some sort of false egg, in the nesting box. When using this method, make sure you gather the eggs just after they’re laid, so that you can further discourage egg eating. After a while, your hens will get tired of pecking at plastic and getting a sore beak, and hopefully the habit will fade.
#3. Give your chickens more protein. Yes, it may be as simple as that. Eggs are high in protein, and some chickens, when they are not getting enough, will go as far as eating eggs! Some things to give high in protein are fishmeal, and cat food. You can also try giving them some game-bird feed; it’s higher in protein than regular chicken food. Also boiled, or scrambled eggs. No, they won’t associate it with raw egg!
#4. Hang ‘curtains’ around the nesting box to make it dark. The egg eaters won’t be able to peck at the eggs if they can’t see them!
#5. Take all straw or nesting material out of the nesting box. This way, the hen will peck at the egg and it will roll away from her. Although it’s a rather odd idea, it’s had success with many chickens! It’s not easy for a hen to break through an eggshell.
#6. Pinless peepers. These are a sort of ‘blinder’ that prevents chickens from pecking at each other. It makes it so that they cannot see in front of themselves, only off to the sides. However this can also be used to break egg eaters. It works in a similar way as darkening the nesting box- the hens won’t be able to peck straight at the egg. Leave these on awhile and the habit will probably be broken.
I’ve tried everything! I can’t get my hen to stop eating eggs, and I don’t want her going in the stewpot! ​
Unfortunately some egg eaters are just impossible to break. There is a solution to this, though, other than the stewpot. You can get a special kind of roll out nest box. This way the eggs will roll out of the hens reach as soon as she lays them. These nest boxes are the kind that battery hen farms use (don’t worry, they are completely humane), and are extremely effective in stopping your egg eater.
I have an egg eater. How can I tell who the culprit is?
First of all you can inspect each hen. Do any of them have egg on their face? Wetness? If you find no evidence, of course, you can always watch the nest boxes to find the culprit. However, there are many easier ways to do this. One way is to blow out the egg, fill it with dish-soap and food coloring. This way you can break and find your egg eater at the same time. Just look for the hen with coloring on her face! Other methods are- placing an egg on the ground and seeing who goes for it, game cameras, and isolating each hen.


Prevention
Of course the easiest way to stop eggs from being eaten is to prevent egg eating in the first place. There are several ways to ensure this.

I hope this is helpful and that you have great success breaking (or preventing) egg eaters!
Reactions: Marc D, Nikuchan, HAPPYCHICKENLADY17 and 14 others

Busted 3 out of 5 of my flock in corner this morning, egg on faces. As the girls have litterally just started laying this week I know the shells are slightly weak. Boosting the protein and trying the egg bombs!
*edited to add*
I have just tried the egg filled with dish soap on my Mother in Laws old maltese cross shitzu. Hes been an egg eater as long as he lived with her (but she never told us that when she sent him to live with us) and the absolute disgusted look on his face! he doesn't look like he'll be going near the coop for awhile 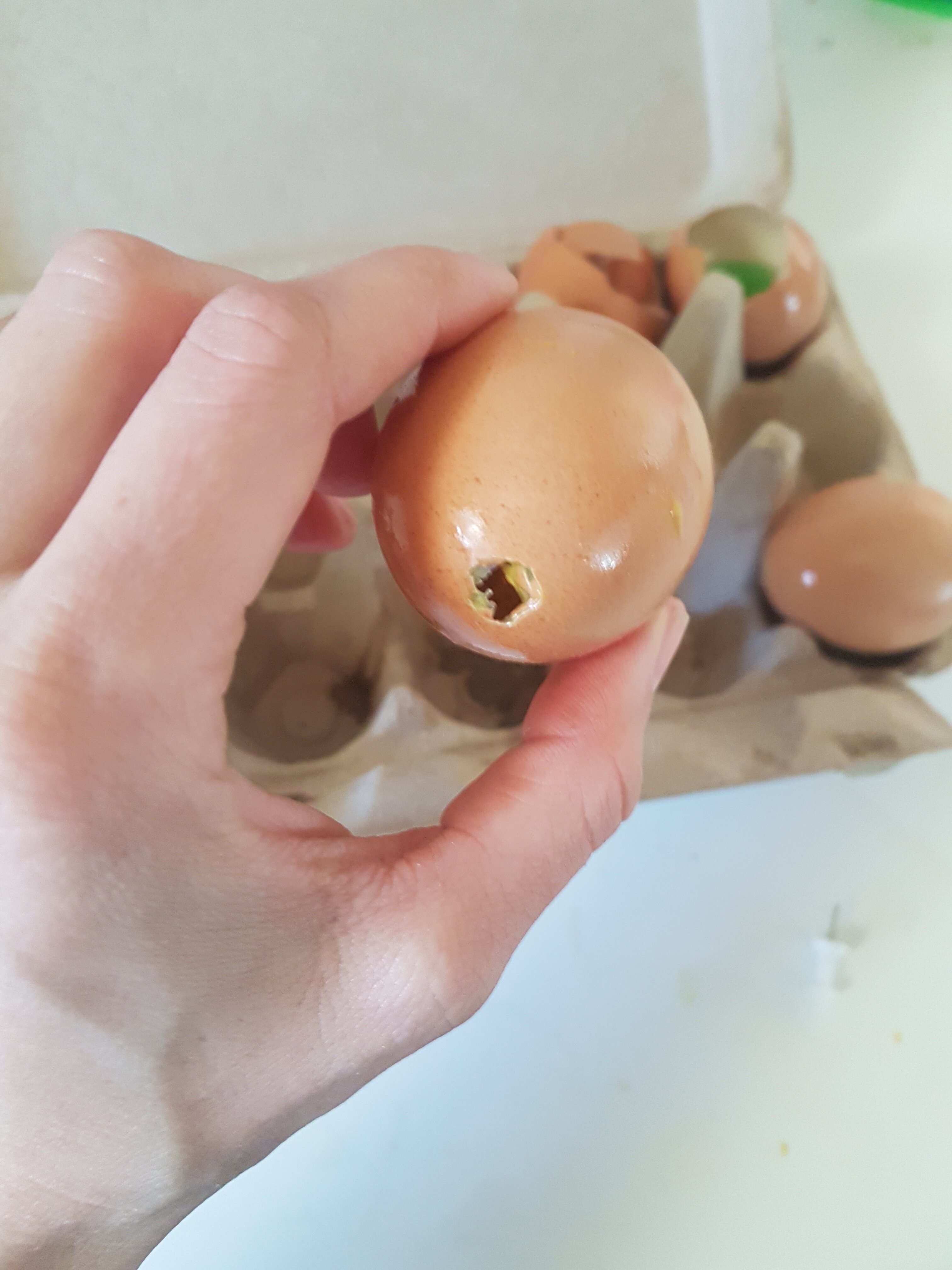 It was helpful! i need to use these methods on my hen. Thanks!!
This article is really good. Very helpfull

I just recently bough a new hen........shes an egg eater. I have her in a little separate pen now, and I'm thinking of building one of those little roll out nest boxes. How does a hen know to lay in the roll out nests? It just occured to me that dummy eggs would also roll out....maybe gluing them down?
It's pretty easy- just take away her current nesting box. She'll get a hang of using the new one, it'll be much better than laying it on the dirt. Gluing down dummy eggs might also help. Good luck!
I was going to do this same topic, but then I saw that you had it, great article, had some new ideas then me! Thanks for sharing the info!
Great job! There are just two typos that I noticed and I just want to help you a bit

Great job! If I get an egg eater I'll likely be trying some of your tips.

You wrote your article at just the right time. Right after you had posted it for the competition, I had my first experience with an egg eater. I had taken the ceramic eggs out of the nest boxes just a few days earlier - thinking that the chickens had all learned what the nest boxes were for. When I found that partially eaten egg, I immediately put the fake eggs back in the boxes, and so far no more eggs have been broken/eaten. Hope I don't have to resort to some of your other suggestions. Great advice - thanks. And congratulations!
yes i am having a huge problem did i say huge I raise show seramas and have a special coop for them in the winter because they do not tol cold well i think they got bored being inside for winter and once 1 started now they are all doing it what a mess it toook 3 years to build up my line and cant hatch anything tried the fake eggs they figured it out unless i sit out there all day i cant caught them they will not lay in the boxes they lay every where so i cant slant the box will try the soap next i think that will fix them i hope
Does the dish soap not hurt them? I want to try this with my little egg-eater.
Great article, I've referred it to many people who asked about their egg eaters. Very informative!
Another idea is the community nest. The common open fronted nest, used by most people, is the key problem with egg eating. It was developed to serve the keeper, not the bird. It's chief failing is that it is bright, too spacious - and hens are clumsy in them. This is made worse when several hens crowd into one. When they manage to break or crack and an egg while stumble footing around, well... the game is on, then.
A darkened nest, as in the community nest, is a sure bet. The birds are forced to stoop and step lightly in these dark boxes, and they cannot peck at what they cannot see. They are also more inclined to them, as the prefer seclusion when laying. Dark curtains added to existing nests can help and collecting eggs right away is also a good plan. Roll away nests also work, if you are inclined to construct them.
Misinformation about egg eating abounds. For example, it is not about protein deficits; chickens don't know they may suffer from them, nor that eggs may help. There is also little credence to the varied mustard/chili pepper/soap or golf ball cures. These are fun and lurid, and they give YOU something to do. But they're more folklore than anything.
My sebright girls are eating there eggs. I'm starting with the golfball method I'll let you know how it works
My whole flock eats the eggs!
Mine are too. they were even eating them out of the roll out nest boxes!!!!!!!!!!!!!!!!!!!! Underneath where the eggs were laid. I used black duct tape and taped everything!!! Hopefully they won't see the eggs, next is curtains and if that doesn't work I guess I am building a community nest box!
awsome post thanks
Another awesome, extraordinarily useful post on BYC!!!! Thank you! We followed your advice immediately after discovering an egg eater had developed, and after one night of putting out two soap-filled, pepper covered egg shells, we've have no more problems over the past five days. I have to disagree wholeheartedly with the above post that says this cure is folklore - it definitely worked for us, and I think it helped that we hopped on it right away when the problem developed.
Our chicken became a egg eater because she was laying shell-less eggs. The eggs would often break when they hit the ground, so she ate the little puddle of snack. So I disagree that diet change might not help. We were unaware of this since she ate them up so quickly until we caught her in the act one day.
My experience with putting a golf ball in the nesting box was good. This spring, one of my hens starting pecking and eating her own and others' eggs. After several times, I put a golf ball in the nest, and the eating has stopped. A one time experience, not a big study - I only have a few hens - but so far it has worked.
You must log in or register to reply here.