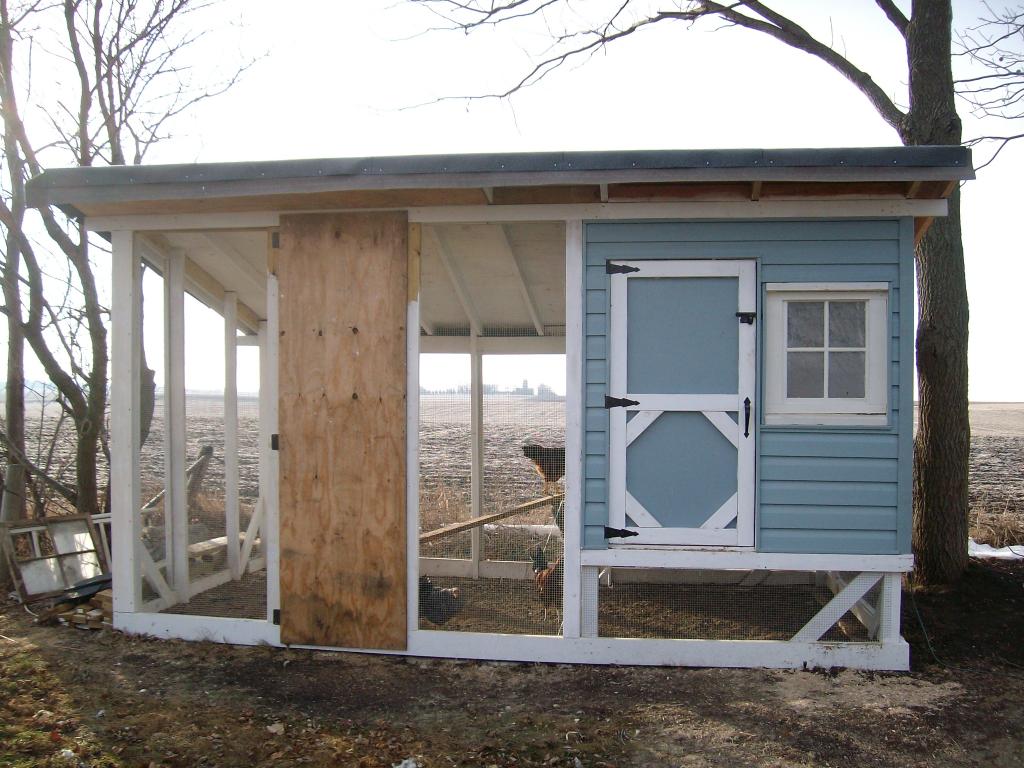 A little back story on how we decided to add some chickens to our farm. I'm a "town" girl. Born and raised in town and never had the pleasure of living with farm animals. Well, this town girl married herself a farmer. And we still didn't have any farm animals. My younger daughter's class had an incubator in their room this year, and the kids got to hatch some chickens. My husband casually mentioned one day that maybe we should get some chickens. I latched onto that idea and ran with it. I quickly found BYC and read as much as I could, and looked at so many different coops that my head was swimming with ideas. I'm sure now my husband is regretting his passing comment about the chickens. He's been hearing about chickens every day, and not just from me, I managed to get the kids in on the excitement. So, here we are. I quickly realized that what I thought was a few chickens and what my husband thought was a few chickens were vastly different. His "few" was about 100. My "few" is about 6-8 or so. We're going with the 6-8.
May 25, 2011 Since it's pouring rain outside today, I thought it would be a good time to sit down and start putting some of the ideas that have been swimming around in my brain down on paper. While sketching it out, I wasn't thinking about scanning it an adding it to my page here, but I think you can see the basic idea. The coop will have a peaked roof (not yet shown), instead of a slanting roof like I was originally thinking. I'll add more draw outs as I get them completed. I'm currently working on the east side drawing of the coop portion, just stopped for a minute to share what I had down so far. May 23, 2011 Breaking Ground!
It's busy here on the farm at the moment. My husband is putting up a new machine shed, and the construction guys came today to dig the footings. I spoke with one of the guys to see if there would be any extra concrete leftover. He said there surely would be. I mentioned the coop, and the size I wanted, and he said it would be no problem to pour the footings, granted that I could get them dug and ready by the next morning. So the kids and I staked out the size of the coop that we wanted (size and location was previously approved by my husband, so I was given free reign at this point) and began digging the footings. We worked for 2 solid hours, and when we were finished, I had 3 very dirty children, and the footing dug for our new coop!!
Coop/Run area marked out with stakes and string. My helpers! My two youngest were more interested in throwing the dirt around. June 1, 2011
We've made a fair amount of progress this past week. Despite dealing with some pretty windy days, here is what we have managed to get completed. You'll notice the design has changed a bit. We've got quite a bit of framing to do yet. Two more windows, the main door, the pop door, and the nest box opening.
June 5, 2011 Progress as of today. It sure does look patched together, which it is since we are re-using a lot of "old" wood that we've had laying around here, but after we get paint and siding done, I think it will look pretty good! Still need to build the doors.

July 25th- As typically happens in the summer, many things suddenly converge and projects get rushed or worse, forgotten. Our intentions to use repurposed wood fell through as well. The building we tore down was in worse shape than we thought. We have been so busy, that we have only been able to do tiny bits here and there on the coop, and taking pictures of our progress was long forgotten in the summertime craziness. Here is our coop today, still unfinished, but the little guys (not quite so little anymore) are installed in their new home. The little guys in their new home.

update: December 16, 2011
We still don't have the coop completely finished. Harvest hit, and there was just too much to do. We threw up a plywood door to get us through the winter. This spring, we'll build another one to match the coop door. Our little chickies have grown so much! Out of our 2 hatches, we ended up with 6 roosters, and 7 hens. We lost a few chickens due to merecks. Lesson learned, don't buy flea market chickens. We happened to be at a flea market and the kids saw some chicks that they just had to have. Luckily, my daughter's favorite one survived. Here's the coop today, and some pictures of our flock (the roosters were hogging the run today, deciding it was time to do their thing, so the hens were hiding inside the coop.) our dog, still trying to have chicken for dinner
Reactions: EmmaDonovan and lifeonblueberryhill

Nicely built coop and run.
Very nice coop.
Thanks for sharing!
I like the design of this coop! There is good ventilation as well. I would definitely add more run space if the chickens are cooped up 24/7. If chickens are always in their coop and run, the run should be at least 10sqft per bird.
Read more…

Great work on what I can see! I really like the color of it, too. Your chickens are beautiful!
Congratulations, we've chosen one of your pics for the CC-POW. Thanks for posting your coop design & pictures to our "Chicken Coops" pages! You can find more info about the CC-POW here: CC-POW Process
I can totally relate to changing plans. Looks like it worked out pretty good though eh.Nice looking coop and run. Actually a favorite color of mine too.
Congrats on CCPOW

how did my dog get in your picture.... very nice coop
nice coop and run. why call it a run? LOL no room to run in there
But why not lock up the dog and let the chickens free range for an hour supervised or so least right before roost time? It is a beautiful thing to watch a chicken run and flap there wings and be "free for a while"
good luck
I dont understand