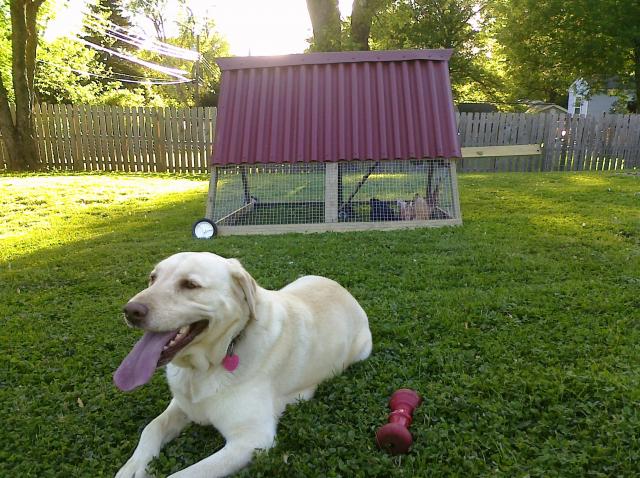 Here is my Chicken Tractor. Took general idea from the "Little Red Hen House" in this book: Chicken Coops: 45 Building Plans for Housing Your Flock by Judy Pangman. I modified it heavily based on reading this book. Fresh-Air Poultry Houses: The Classic Guide to Open-Front Chicken Coops for Healthier Poultry by By Prince T. Woods


I recommend both books, (checked them out from Public Library), but especially the Fresh-Air Poultry Houses. It really reveals what you DON'T need your chicken coop to be. Anyway, here are a few pics:
Coop Framing: 6X6 Base gives us a little under 36 sq ft of foraging terrain plenty for 4 chickens, and the upstairs is 3.5X6 for another 18 sq ft of space for roosting, nesting, etc.
Used ACQ treated lumber. The fram consists of 3 - 2X4 joists and 1X4 slats that box it in. ACQ Plywood used for flooring and doors. The left side is where the roosting pole will be. The right side has opening to access bottom and will have a nest box. This shows the open air flooring that will be under the roosting pole, that isn't installed yet. It's cattle panel cut to fit the opening with hardware cloth laying on top of that. Hardware cloth is attached via zip ties. Also in the background you can see the unfinished ladder. Steps and wheels were installed later. Partially Roofed Coop. You can now see end of roost pole, and a good view of the feed bin. It's attached with L bracket so it can't get kicked around. Also bottom right see the oval hole cut out where the waterer will slide into. Wall on right side of pic is the nest box wall. Doors that access waterer & feed bin on left and the nest box on the right. Hardware Cloth Window on the Roost Side. The hens love to "fight" over the window seat on the roost pole. It appears it's first come first serve, as I've seen various hens that ended up there after nightfall. The narrow door underneath allows me to get a hand broom in there to knock off any manure that gets stuck on the hardware cloth beneath the roosting pole. You can also see the 6" lawnmower wheels attached with a 7"X.5" bolt. I will probably upgrade to a 7" wheel later as it scrapes some when I move it over a hill/bump in the grass. Inside view of roosting pole side of coop. Also illustrates the "Open Air" Philosophy that I ascribe to. Both ends have a hardware cloth window to allow air flow. In Winter I will simply move the coop based on persistent wind conditions so the roof side takes the brunt of the wind Inside view of watering container and feed bin. Watering Container is simply a pitcher with 2 commercial gravity watering nipples from Farmtek installed in the bottom. No soiled/spilled water! I trained my chicks first day I brought them home on a smaller version. They took to it immediately, and since they have to peck it constantly for water, it REALLY has negated the feather plucking problems I read about. The feed bin is a goat feed bin from Tractor Supply. Inside view from Roosting Pole side, you can see nest box and feed bin behind "Cutie Pie". Girls Grazing, and one using the ladder. I since have added some 1 inch diameter tree limbs to help them climb easier. You can see the wheels attached to bottom of the ladder. These were taken from a John Deere riding toy that my kids had outgrown. Very lightweight and big plastic wheels made it an easy choice. Attached via zip ties and holes drilled through bottom of the ladder. Here's the finished coop with our AKC "Chicken Shepherd" Nest Box with one of First Eggs from last week! I was suprised to see an egg this early, as the hens were just 17 weeks old. I had just migrated them to layer feed and oyster shell a few days before. The mat is an outdoor floormat that I cut to fit, they can scratch at it and it feels nesty. No messy straw, and I can spray it clean. The strands stick up and cushion the egg from breaking.. so far anyway.. Some may wonder how I managed to get an egg so early. Well, let's just say I gave my chickens an "offer they couldn't refuse". I showed this to the chickens a few weeks ago, and we had a heart to heart about their fate should they choose to not start laying.. I'm KIDDING!! But in all seriousness.. I wonder sometimes how good my free range chickens would taste done this way.. heartless I know.. Let me know if you have questions, or thoughts ya'll!
Red

Good build with good detail.
Great coop description, and beautiful coop!
I love your little design and that you have plenty of space for your 4 birds. Even better is that you have enough ventilation. Your use of space is also very efficient. Well done!
Read more…

Good job on this. I will be making a tractor this weekend based on what you have here. Thanks. Though i wish you had included an image of how you capped the roof.
Looks like Ondura roofing and siding material with Ondura roof cap...I used that material on my shed and it has lasted since Hurricane Ivan here on the Gulf Coast
Nice! I wish I had seen this one before I built mine. Only one question: How do you get the chickens out, if the need arises?
I copied this but used 2x3s and 1x3s to make it lighter. I do like the Ondura roofing. Thanks for sharing.
https://www.dropbox.com/s/9osqw99e0my4fqq/Photo May 28, 7 17 37 PM.jpg
I am also using 2x3s and 1x3s along with an assortment of other smaller wood as I will be moving it frequently within a fenced yard. EXCELLENT design and photos! Thanks for sharing!
I love this chicken tractor and the open air theory. I am planning to build one for my silkies and cochins to share and I will be using this as my guide. I am so glad to see it as we are drawing up plans. I never thought of the fake grass! I may incorporate that into my hen house as well! I have 4 juveniles that like to roost and poop in their nesting boxes and I have to constantly clean hoping they will get the hint lol! Thanks for the wonderful pictures and information I am a newbie and I am trying to be like a sponge to absorb all I can! I am loving the chicken fever lol!
Do you think this could fit 6 chicken and if not how easy do you think it would be to make for 6 chickens. I love the coop by the way!
After some time has passed are you still loving this? Are there things that you would do different?