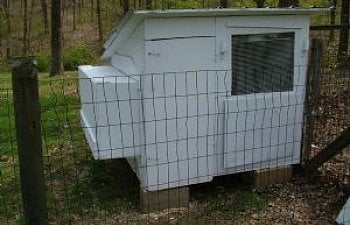 ​
Our basic premise for this coop was to recycle as much scrap lumber/materials as we could. We did this because 1) we believe in reuse of materials, 2) it's cheaper, and 3) we had the materials handy.

The coop was built from an abandoned tree-house or deer blind (never quite figured out which it was). Took some time to tear that tree-house down out of the tree. All of the timber was reused in this coop, as well as part of the roof. The old ladder leading up to the tree-house was used for the indoor roosts.

Three of the exterior walls as well as the roof board and nesting box were made of exterior grade 3/8" plywood. The smaller south facing wall was made out of some of the tree-house timber. The roof is half aluminum and half shingle.

Because we were working from scrap lumber for the basic frame/flooring, there was no proper plan. It was basically match pieces up and see what works out best. The floor is roughly 68" by 53", which would have been the base dimensions of the tree-house. The south wall is 38" tall; the north wall is approx. 60" tall. The slant to the roof obviously allows for rain runoff, which actually runs off onto a slope carrying the water away from area around the coop. 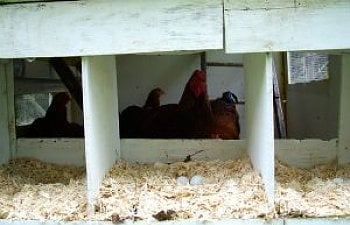 As you will see in the photos, the nesting box is an elevated exterior design, much like an air conditioner. It is divided into three separate nests and it's exterior wall is latched for easy access to the nests. The box's exterior is roughly 38" across, allowing 12" across nesting sections. The box is 9" deep. The inside of the coop has a wooden closet rod in front of the nesting boxes for access. As stated earlier the roosts were made from cutting up an old wooden ladder used for the tree-house.
​ 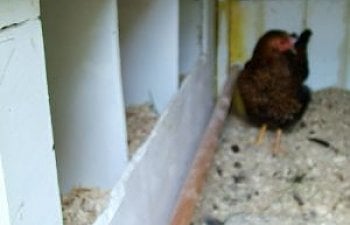 ​
The bedding is pine bedding purchased at the local coop or Rural King. We are using a deep composting method, removing any wet places and replacing with fresh bedding. The discarded bedding goes to our composting bins. The interior also has a converted pallet that's used for the water fount and food dispenser when the chickens are locked up. Also you will notice in the above photo that we have a cheap hygrometer/thermometer tacked to the back wall to keep tabs on the temp and humidity. It was a fairly inexpensive unit that we bought either at Lowes or Rural King.

The coop has two doors. A larger side door for people access and the front chicken walk which serves double duty as a hinged latchable door.
​ 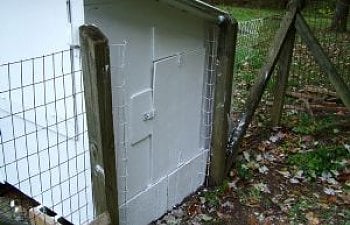 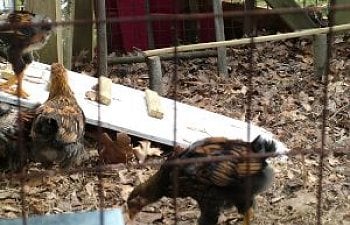 ​
The coop opens directly up into their fenced run which runs parallel to our fenced backyard. We have 3 acres, most of which is wooded, and the chicken run/coop is ideally located in a shaded area where the woods start. It is always cool in this area and the chickens never appear to get overheated. The entrance to the run is from our yard and we regularly let the chickens out to graze in the fenced backyard.
​ 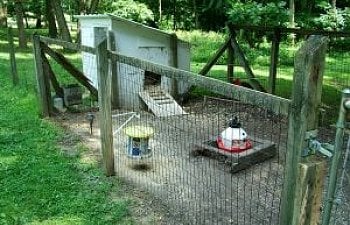 ​
In regards to food and water, we've got a plant hanger nailed to one of the fence posts and the the feed bin is hung from there. The feeder is actually made out of an old 5 gallon bucket using a plan provided in Backyard Poultry magazine. On an elevated pallet in the middle of the run is a 3 gallon waterer. In two smaller pig feeders attached to the wire of the fence, the chickens get their grit and oyster shell. There are also a variety of roosts out in the run made from old dowels, curtain rods, and ladders.
​ 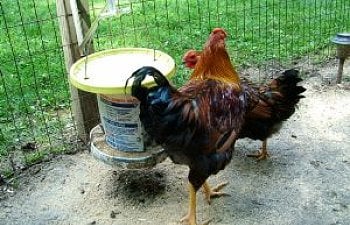 Here are some additional photos of the coop. Hope you found something useful looking through this. 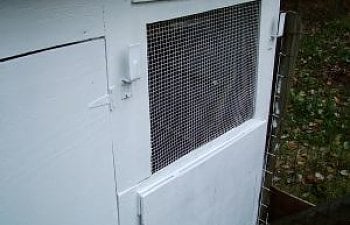 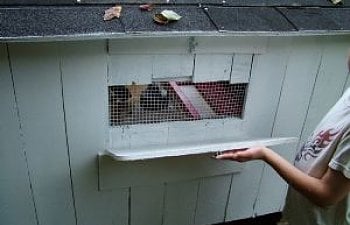 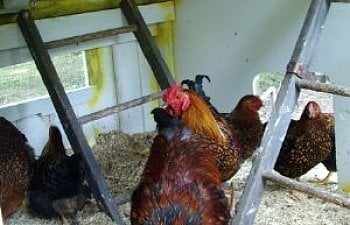 I see the photos of the coop ok, but the font used for the narrative is so small I can barely read it.
This coop page contains pictures which would be helpful
Read more…