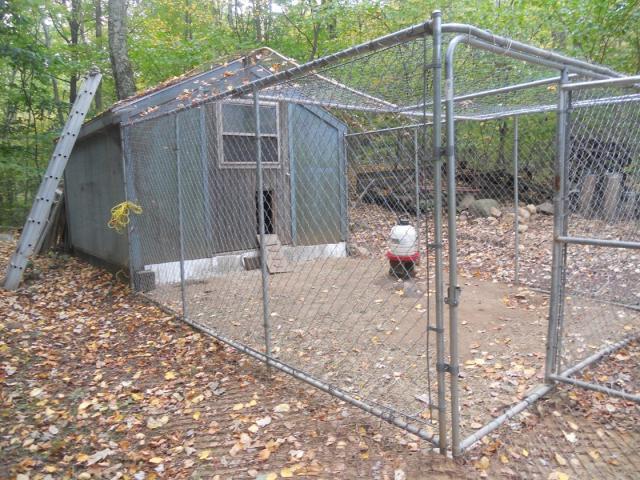 So I was sort of lucky to have a coop-like structure pretty much set to go when I got my first set of chicks.
My parents had built a 10x12 shed to store some extra stuff in that, when the chicks were growing too big for the basement, they allowed me to convert into a coop. As we all know, coops vary as much as people, but I was so glad I had something to work with.


The front view of the coop-- I will eventually be adding onto it and making changes to the existing building. Both sides of the coop and run (which is made of panels of a dog kennel, covered with some netting to keep out predators). At the base of the fencing we put down heavy gauged chainlink fence that overlapped a good 2 or 3 ft, so that predators can't dig underneath into the run. Interior of the coop in the early days. On the left is the 7 nest boxes, in the middle is the feeder and the feeder that has oyster shell and grit, and the roost on the top right of the picture. The nest boxes were made so that it's a complete unit with removable dividers that can be moved to make either larger boxes or smaller boxes. At 1x1x1, they are the standard size for nest boxes but the benefit is that they can be cleaned easier by taking out the dividers. Also there is a small perch to make it easier for the hens to get into the boxes. Above is a red leghorn investigating the boxes and choosing one to sit in.

Nice big coop. Does it have any ventilation?
Nice that you used the old shed. How do the hens get onto the roost?
Read more…