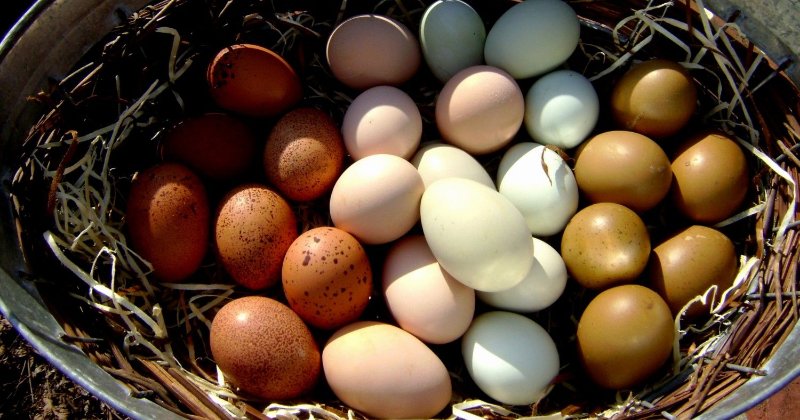 The more I read about chicken eggs the more amazed I am. We think of eggs as a convenient food source and added benefit of keeping chickens, as well as an essential ingredient to our breakfast fry up, but there are so much more to them than meets the eye. Did you know...?

- According to the Guinness World Records spokesperson the largest egg laid by a (chicken) hen had 5 yolks, measured 31cm (12.2 inches) round the long axis, 22.8cm (9 inches) round the short axis and weighed nearly 340g (12 oz). He didn't say if the poor hen survived.

- The most yolks found in one chicken egg was 9! Imagine incubating that!

- Can't remember which eggs you've boiled and which are fresh? Spin them: the liquids in a fresh egg will cause it to wobble and a boiled egg will spin easily.

- When dropped in water a fresh egg will sink and a stale egg will float.

- Provided that pressure is added at the ends, not the middle of the egg, a well formed egg shell will support pressure of up to 9 pounds.

- The record for the most eggs laid in one day by one hen is 7.

- There is approximately 10% percent more calories in a cooked egg than a fresh egg.

- In 1979 a white Leghorn hen set the world record for egg laying by producing 371 eggs in one year.

- Eggs contain 13 essential vitamins and minerals and egg yolks is one of the few natural foods than contains vitamin D.

- Contrary to popular believe, hens do not need a rooster around to make them lay eggs. The only part roosters play is fertilising the eggs. Here's pics to show the difference between fertile and infertile eggs: https://www.backyardchickens.com/t/16008/how-to-tell-a-fertile-vs-infertile-egg-pictures

- Egg shells are very porous. An egg shell can have as many as 17 000 pores over it's surface.

- Studies have shown that free range eggs have a higher nutrient percentage than battery eggs. Another good reason to keep your own flock for eggs!

- China is the worlds largest producer of chicken eggs with a whopping 160 billion eggs laid by their hens in a year. The US hens produce an equally impressive 65 billion eggs annually.

- A whole egg contains approximately 3 tablespoons of liquid and the yolk itself contain about 1 tablespoon of liquid.

- In the right circumstances a fertile egg will take 21 days to develop and hatch.

- About 2% of all eggs are odd shaped/malformed. For mind blowing images click here: Images for odd shaped eggs images

- When storing eggs remember that an egg ages more in one day at room temperature than in a week in the fridge.

- Eggs are about 105*F when laid and as they cool down the liquid inside contracts, forming an air cell at the large end of the egg.

- An egg is laid large end first and gets coated in a liquid called a "bloom".

- You can rub off the egg shell colour if you can get to the egg just as it's been laid, before it dries off. Once it's dry though, no amount of rubbing will have any effect on the colour.

- Who came first? The chicken or the egg? According to Canadian researchers it was the egg, since dinosaurs laid eggs and made bird-like nests long before birds (including chickens) evolved from them (dinosaurs)

- A hen needs roughly 5 oz food, 10 ounces of water, 14-16 hours of light (artificial, natural or a combination of both) and average 25 hours to produce on egg.

- A hard boiled egg will peel more easily if it is 1-2 weeks old before it is being cooked.

- The ancient Chinese stored eggs up to several years by immersing them in mixtures such as salt and wet clay; cooked rice, salt and lime; salt and wood ashes mixed with a tea infusion. Some of these treated eggs exhibited greenish/grey yolks and whites resembling brown jelly. Nowadays eggs stored like this is considered a delicacy in China.

- French brides break an egg on their thresholds for luck and healthy babies.

- If you make a small hole in the fat end of an egg before boiling it the egg's contents will expand and your boiled egg will not have a flat bottom.

- The scientific study of eggs is called "Oology"

Now, I have an egg riddle for you: On a windless day a rooster lays an egg on the peak of the roof. Which way does the egg fall? To the bird's left or right?
Reactions: Preston1, David of Hawaii, jmilopez59 and 19 others

Wow! What a great and informative expose' on eggs! I learned about 12 new things!! Thanks for the time and effort it took to compile this fun and informative article!!
Great job!
Really great article.
A welth of information.
Thanks
Great information!
Wow, I want leghorns!!!!
awesome!!

+answer to riddle+ roosters dont lay eggs, LOL
Great job Sumi... love all the facts, some of which I did not know> Do you keep your eggs out on the counter, or straight to the fridge?
Enjoyed reading this!
And to answer your riddle: The egg does not fall to the right or the left because flying pigs will grab it before it has a chance to fall. The moral of this story is: "Roosters will lay eggs when pigs can fly!"
The answer to your riddle is: No egg will fall because roosters do not lays eggs.
Loved the info, thanks a bunch
roosters dont lay eggs,
Great article, very informative.
Loved this
BIG thumbs up from me! Awesome!
i keep working on a strain of egg laying roosters, but have never successfully made one.
Roosters don't lay eggs!!!
Great info Sumi!!!!!!!
Loved it!
Fresh vs. boiled.... better remember that one if I'm ever on that game show!
the answer to the riddle. roosters don't lay eggs.
if one of your roosters lays an destroy it because that's how the mythical basilisk is born.
You must log in or register to reply here.