Article Gallery
Leave a rating
Hello and welcome to my BYC page. Here I am posting my experiments and projects in the making.

This project started when I was stupid about chickens, and had no Idea what I was doing. Two of our RIR's had gone broody simultaneously. they had a horrid habit of eating our eggs and ended up eating almost all the eggs, two hatched. they were a cross with a RIR roo over a White leghorn hen. They are now grown up, one was a roo, the other was a hen. the hen later went broody but was a horrible mother and abadoned her chicks or killed them.

Here is a picture the father: 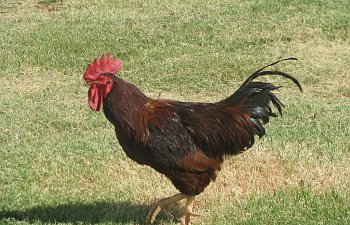 The mother was a white leghorn, I have 12 and I don't know which one it really is. The offspring is below. 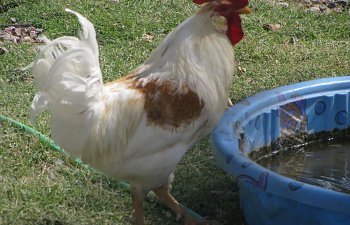 There is also a female from this cross, but I don't have a good picture. this picture was taken two years ago, the cock pictured above is now in a breeding pen with 2 ameracaunas and a Barred plymouth rock. While we are on the subject of barring, the cock above has got barring on his front hackle feathers and some on his saddle feathers. This is strange because none of the birds crossed show signs of barring, but may have the genotype for it. The reason he is penned with a BR is because that is the next step in the breeding process, the Ameracaunas are there for company and for cool mutts. The purpose in breeding these animals is to produce a stylish and flashy dual purpose bird that looks good AND serves a pupose other than showing. here is an outdated pic of the BR he is penned with, in this pic she is still a chick. she is now fully grown, but still not laying eggs. I will get a more recent pic sometime later when there's time. 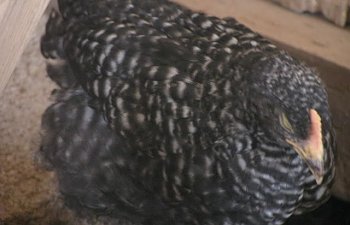 If anyone can give me an idea, or a chicken calc. link to what this cross would look like, It would be very appreciated.​