Article Gallery
Leave a rating
Bantams are Smarter ...
I'm 16 years old, and hated chickens when I was first around them. Well, maybe hate is a strong word, but I definitely didn't care much for the little things. It may have had something to do with the 25 chicks my dad ordered from McMurray. It was an assortment of brown egg laying pullets, but they threw in two Easter Egger roosters and one Dark Cornish rooster. Go figure. The EEs were fine, but pretty soon the Cornish began pecking at the vents of some of the chickens. The two EEs were included in the picking, and they recovered, but we did lose one Buff Orpington to that little devil. The cannabalized Cornish coupled with some of the ugliest Sex-Links you have ever saw, and I began thinking of those 25 chickens (now a little less due to losses) as glorified crows....
But then I discovered Bantams, which have always appeared to be more refined and a little smarter than your Standard chicken. My sister's Bantam hen, a mutt, had already hatched off a bunch of chicks, and my stepmom's hen (also a mutt) had hatched hers off a little before that. Saying hatched off may not be the right phrase because we actually used an incubator

. I'd bought 3 rabbits a few weeks earlier at an auction, so I traded my best looking rabbit for my stepmom's best looking pullet. She would have given it to me, but I insisted on trading somehow. I then 'bought' a young rooster from my sister in return for tutoring her in science

I just knew I was going to be in the Bantam business for sure, even if it was with a couple of mutt chickens. All I had to do was wait for the two birds to mature. And then I actually let the two meet for the first time... The pullet, slightly larger than her new mate, whooped all over him. The only thing he could do was stick his head out of the cage and hope she didn't pick his brains out. Needless to say I separated the two, sold the rooster, and put the pullet with a more aggresive and fully mature rooster I bought later.
Now, not quite a year later, I've come pretty far. At last count I had somewhere between 15-20 grown bantams, plus the numerous chicks. I went a little crazy and bought every Bantam in sight I could afford, and now I'm having to painfully pick and choose the ones I really want to keep. I have a trio of Silver Duckwing Old English Game Bantams, and a pair of pet quality Red Pyle Old English Game Bantams, and they are staying for sure. I also have various 'purebred' Bantam hens and rooster, unfortunately no two are the same breed!
I also ordered four Gray Japanese Bantams and five Mille Fleur d'Uccle Bantams from Ideal Poultry. One of the Japanese is the only one that I'm having trouble with. His behind is a little past, but it's clearing up, and I'm watching to be sure his vent doesn't get blocked. All my extra work with him has sort of made him a favorite. I named him Hiro after a Japanese character on the show Heroes. In the case that my little Hiro turns out to be a girl, she'll be named Charlie, who was Hiro's girlfriend for a short time. Yes, I'm that lame

.
Ideal also shipped about 13 Silver-Laced Wyandotte roosters with them as well. I plan on keeping one of the roosters, but the rest of the packing peanuts have to go!!
Despite my favoritism toward Bantams, I'm starting to see that there are some Standard chickens that I do like. My stepmom's Rhode Island Red rooster, named Red of course!, likes to drink from the 2 liter bottles we use to fill their waterer up as we are pouring the water in. I also have a Standard Blue Polish rooster, though his crest is also blue, tipped with brown, and only hangs to one side, that's one of my favorite chickens that I own. My six Standard Golden-Laced Polish chicks just hatched out as well. Depending on the hen-to-rooster ratio of the GLs, I want at least one rooster and two hens together, I'm hoping to have a left over hen for Donnie, the Blue Polish. He gets lonely

Well there you have it, my chicken adventures to date, and while it barely compares to some stories out there, I think it's been fun. If there's one thing I've learned, just because a rooster sells for two dollars at an auction doesn't mean you should buy it

Here are some of my chickens, it's a work in progress, so be patient:
The original pullet! Some of her breast feathers got plucked out. They were just growing back from the first time it happened. Needless to say, she's been relocated to a new home, where she doesn't have to compete with another hen. Some people think she's kinda plain, but I have to disagree. I'm going to try to get a better picture: 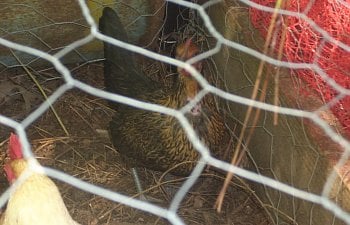 This is my Silver Duckwing OEGB. He's not named yet, but he's definitely one of my favorites: 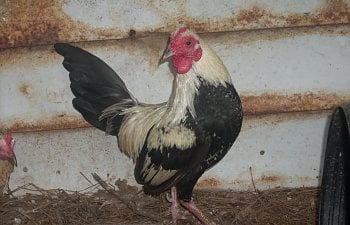 Here he is with his ladies: 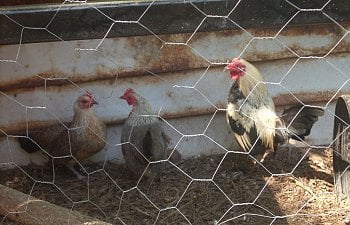 More pictures coming, I promise. I just have to find time to add them.